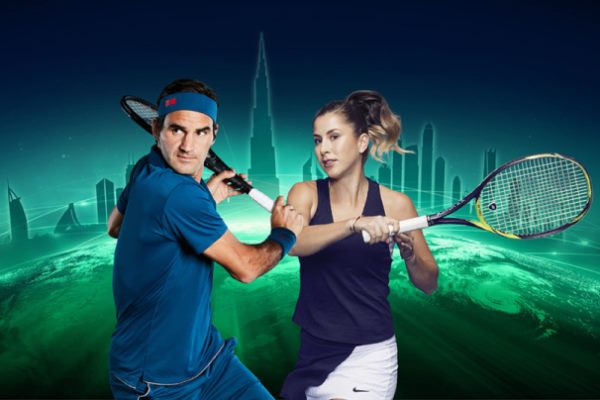 Swiss pair Roger Federer and Belinda Bencic will attempt to achieve a remarkable double as they bid to retain their Dubai Duty Free Tennis Championships titles.

Last year was only the second time in the history of the tournament that two players from the same country won the title, after Fabrice Santoro and Amelie Mauresmo in 2002.

“It was remarkable to see two players from the same country emerge as our Dubai Duty Free Tennis Championships singles champions, and we are delighted to welcome Roger Federer and Belinda Bencic once again,” said Colm McLoughlin, Executive Vice Chairman and CEO of Dubai Duty Free. “We look forward to seeing if they can set a new milestone by successfully defending those titles, but they face competition from one of the strongest fields ever assembled in Dubai.”

While Federer began last year as a strong favourite to win his eighth Dubai crown and at the same time claim a history-making 100th career title, no-one expected Bencic to emerge from such a star-studded field to become the champion – least of all herself.

Although formally a top 10 player she had not won a tournament since June 2015 after suffering a number of injuries, one of which took her out of the game for five months. Her ranking fell as low as 318 before she embarked on re-building her career. And even as her week here progressed she flirted with defeat as she fought off six match points against Aryna Sabalenka in the third round. But she survived that scare against the world number eight, and then beat number two Simona Halep, then number six and two-time champion Elina Svitolina, and finally number four Petra Kvitova to become an unlikely champion.

“It’s unbelievable. It’s incredible,” said Bencic after her victory. “Especially I’m realising after two rounds, we were already saying, ‘Wow, this is a great tournament. Now it’s only bonus. Then I won against Sabalenka after being out already. So many times I was close from defeat. It’s unbelievable that I ended up winning this.”

Her victory proved to be a springboard as she went on to reach the final in Mallorca, reach the semi-finals of a Grand Slam for the first time in her career at the US Open where she beat world number one and defending champion Naomi Osaka, and win a second title of the year in Moscow. Following her US Open run, she re-entered the top 10 after a gap of four years and four months.

While everyone was surprised to see Bencic lift the trophy, few if anyone expected that someone other than Federer would triumph the following week. Although he faced a formidable challenge in the final against Stefanos Tsitsipas, an opponent who had sensationally defeated him at the Australian Open just weeks before, the Swiss maestro came through to continue his staggering run of success in Dubai.

That may in part be due to him enjoying the luxury of enjoying familiar surroundings when he competes in Dubai. Players rarely play in their home city and have to adapt to new places every week. But Federer has long had a base in Dubai and he spends a considerable amount of time in the city, and that makes the event more comfortable for him.

“I feel very happy here when I’m playing the tournament, no doubt about it. I feel like I do get like somewhat of a home crowd support,” he said. “Yeah, walking around and stuff, I know my way around. I love taking my car and going to places, going to restaurants, all that stuff. I mean, it depends. Obviously if I would go to the mall at 9pm, not the cleverest move I could make. I know where to go, how to do it.”

“Belinda Bencic’s victory last year as she upset so many top 10 opponents demonstrated that no player, regardless of their ranking and reputation, can be assured of success at the Dubai Duty Free Tennis Championships,” said Tournament Director Salah Tahlak. “Competition is fierce right from the very first day and the outcome of every match is unpredictable. And that means once again we can look forward to a wonderful two weeks of thrills and surprises.”

Tickets for the 17th – 29th February tournament are available at www.dubaidutyfreetennischampionships.com.