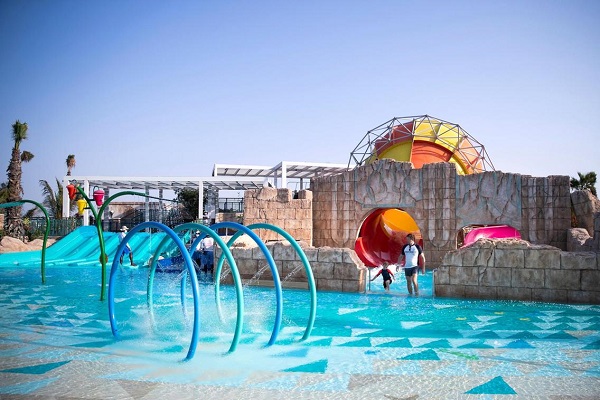 The attractions include Trident Tower, a 48-metre-tall attraction with 12 waterslides, as well as Splashers Lagoon and Splashers Cove, a children-only experience.

The expansion will increase the size of Aquaventure by a third, and will feature the world’s tallest waterslide of its kind, the longest family water coaster and the tallest vertical drop body slide in the Middle East.

Some of the attractions at Trident Tower include: Odyssey of Terror, the “world’s tallest waterslide with a double tornadowave”; Shockwave, a family rafting water coasting experience; and Medusa’s Lair, which takes riders through a series of twists and turns in dark caves.

Meanwhile, Blackout, also part of Trident Tower, will be the tallest vertical drop body slide in the Middle East, while Immortal Falls will be the region’s first cliff-jumping experience.

New slides at Splashers Lagoon and Splashers Cove will also be revealed, such as the Riptide, Comet Racers and Swirl, for the little ones.

With this expansion, Aquaventure will be home to a total of 105 slides, attractions and experiences, plus 26 food and beverage outlets (an increase from the previous 17).

"We are extremely proud to be able to present this record-breaking expansion at what has been a challenging time for us all, but with our stringent health and safety measures in place and expansive staff training programmes, we look forward to delivering fun in a safe environment that Atlantis, Dubai is known for,” said Tim Kelly, executive vice president and managing director at Atlantis, The Palm.

The new areas will be open to the public from Monday, with resident day passes starting at Dh169 for adults and Dh149 for children, and annual passes from Dh495.