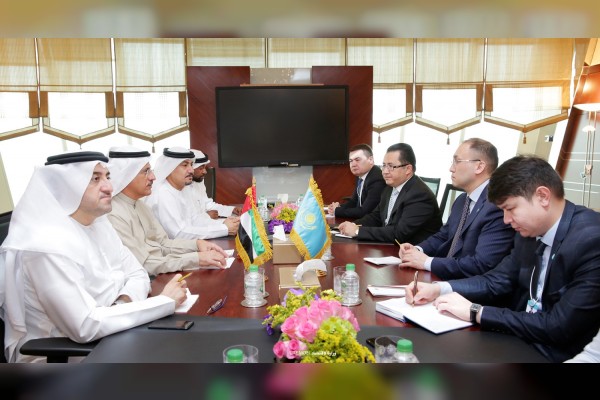 WAM -- Sultan bin Saeed Al Mansouri, Minister of Economy, has called for stronger cooperation between the UAE and Kazakhstan in the areas of information systems, innovation, and smart cities during his meeting with Kazakh Minister of Information and Communications, Dauren Abayev. The discussions revolved around the creation of joint mechanisms for facilitating cooperation and exchange of expertise in these key segments.

Amidst rapid global technological developments, the two sides acknowledged the growing role of information and communications technology, ICT, in innovation- and knowledge-driven economic progress and sustainable development. As such, both parties underscored various collaborative opportunities to exchange experiences in the vital ICT sector. This strategic coordination will strengthen and bring bilateral relations between the two countries to a higher level.

Al Mansouri attributed the robust relations between the UAE and Kazakhstan to their willingness to enhance their economic and trade ties and leverage their strategic geographical locations, strengths, and potentials.

According to the Minister, the foreign trade volume between the two countries exceeded US$270 million in 2015 and reached more than $180 million during the first three quarters of 2016. He expects these numbers to grow further in light of the two states’ joint efforts in a number of fundamental sectors.

Abayev expressed his nation’s interest in strengthening its links with the Emirates and learning from the UAE’s march towards becoming a premier global investment and business destination.

Abayev added that Kazakhstan is now reinforcing its business and legislative ICT infrastructure according to growth requirements. In addition, he expressed his desire to exchange ICT expertise and experiences with the UAE.

Other high-profile government officials who took part in the meeting were Mohammed Ahmed bin Abdulaziz Al-Shehhi, Under-Secretary for Economic Affairs, Humaid bin Butti Al Muhairi, Assistant Under-Secretary for the Corporate Sector and Consumer Protection, and Essam Al Falasi, Director of the Information Technology (IT) Department at Ministry of Economy. Arman Issagaliyev, Kazakhstan’s Consul-General in the UAE, and other high-ranking Kazakh delegates also attended.