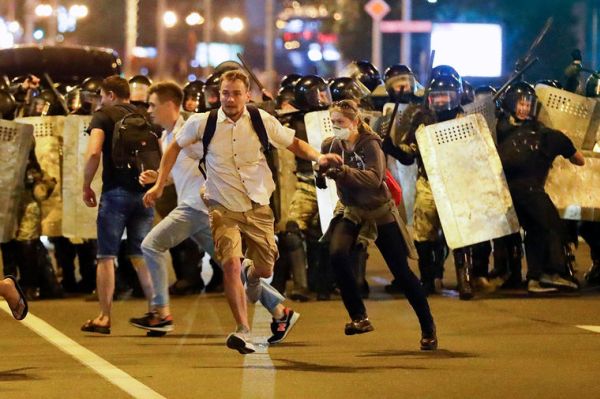 United Nations High Commissioner for Human Rights Michelle Bachelet condemned the violence in a statement Wednesday, arguing "the use of force during protests should always be exceptional and a measure of last resort, clearly differentiating between any violent individuals and peaceful protesters, against whom force should not be used."

The European Union and the United States are both considering enacting sanctions on Belarus for its response, while autocratic regimes like Russia and China have voiced support for Lukashenko.

Lukashenko has downplayed accusations of violently cracking down on his opponents. He said he still enjoys widespread support and warned Belarusians that they should not be taking part in unsanctioned rallies.

But his opponents say otherwise.

Two say they have been forced out of Belarus because of threats from the government. Tikhanovskay, who stood in for her husband as an opposition candidate after he was jailed in the run-up to the vote, fled the country earlier this week. Her campaign told CNN on Sunday that nine people associated with the campaign had been arrested, and her decision to leave was made in part to free her peers.

A representative for Tikhanovskay, Olga Kovalkova, told Belarusian outlet TUT.BY on Tuesday that Tikhanovskaya "had no choice," and said that part of the opposition candidate's team was still being "held hostage."

Tikhanovskay and her children are now in neighboring Lithuania, which has offered to mediate the dispute.

There have been protests reported in dozens of cities and towns, but the bulk of arrests have occurred in the capital, Minsk, where key ring roads and streets were blocked by demonstrators on Monday evening and police deployed tear gas and rubber bullets to disperse crowds.

Analysts said the level of police violence against protesters was unprecedented.

"They have used water cannons, stun grenades, rubber bullets, tear gas," Alex Kokcharov, a political risk analyst at IHS Markit, who specializes in Belarus, told CNN. "I think the response by the police is to cause some casualties, such as injuries, which would demotivate a lot of people from attending the protests."

Lukashenko enjoys wide support from the country's elites, but what would "crack" them "is widespread civic disobedience movement such as long-term labor strikes in state-owned enterprises and transportation networks," Kokcharov added.