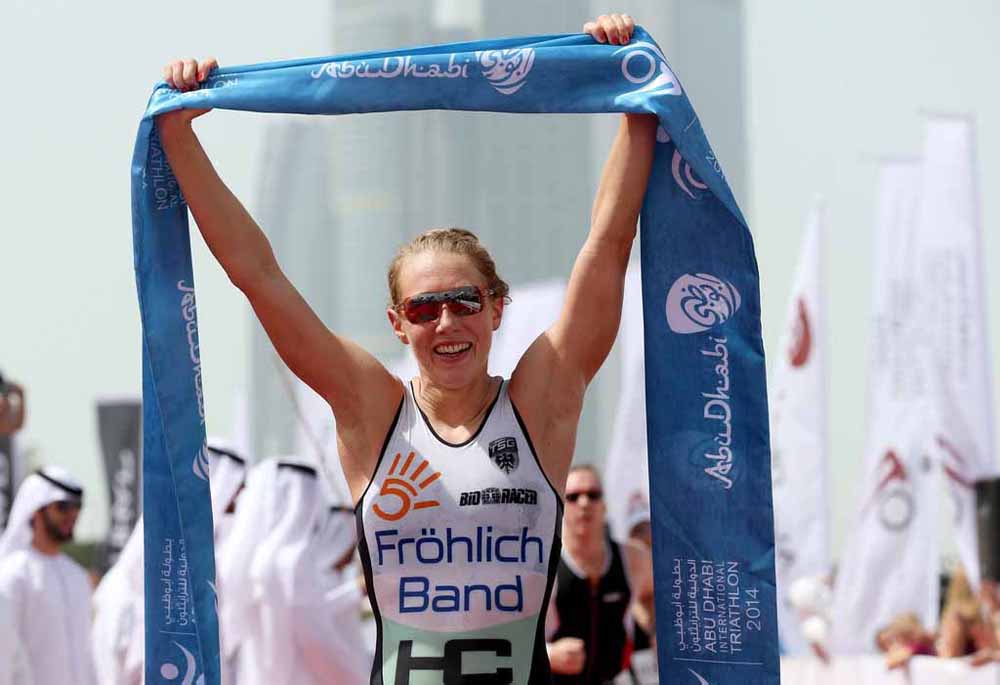 The all new event is set to be the highest calibre triathlon staged anywhere in the Middle East and will take place on the shores of the UAE capital. Over 2,000 people of all ages and abilities are expected to race alongside the world’s greatest athletes on one of the sport’s most spectacular course layouts.

On the men’s side, 2014 ITU World Triathlon Series Champion, Javier Gomez, is looking to start his season on a winning note in Abu Dhabi. “I am delighted to finally be coming down to the UAE to compete in the first ITU race of the year,” said the Spaniard. ”This race will boast the world’s top triathletes — it’s going to be super competitive and I’m going all in to win. I am also competing in a half distance race the weekend before so I hope I am not too tired.”

With four ITU World Championships under his belt Gomez will be a force to be reckoned with next month and will not be resting on his laurels. “I’d definitely like to get off on the right foot at the first race of the ITU World Triathlon Series because that just sets the mood for the rest of the year,” added the 31-year-old triathlon titan.

The most anticipated triathlon of 2015 will also see Gomez’s greatest rivals, Britain’s Olympic Gold and Bronze medallists from London 2012, Alistair and Jonathan Brownlee, make a welcome return to Abu Dhabi. The Brownlees will be competing for top honours on the world-class course and hoping to continue their recent success in the UAE where Alistair has twice previously finished first in the Short Course race at the Abu Dhabi International Triathlon 2013 and 2014.

“Racing in Abu Dhabi is tough but it’s always an amazing experience and it gets more enjoyable every year. The first race of the year is always important for everyone and it will be interesting to see who is in the best shape and can make the best start to the new season,” said the Yorkshire-born star who, like his brother, will be targeting Olympic qualification this year.

On the women’s side, eight of the top ten power girls, including reigning World Champion Gwen Jorgensen, have thrown their hats into the ITU World Triathlon Abu Dhabi ring and will all be vying for top honours. The 28-year-old American is eager to make an impactful debut in Abu Dhabi. “This will be my first time racing in the UAE,” she said. “I am sure it will be a fantastic experience. I’m looking forward to the first race of the year.”

In 2014 Jorgensen was the first woman in the history of the ITU World Triathlon Series to win four consecutive races and the American will be looking to continue that winning streak in 2015. “This stop in Abu Dhabi should be an exciting and memorable race on the series calendar. A breathtaking course and stellar line-up of athletes are the perfect ingredients for an extraordinary race weekend,” added USA Triathlon’s Triathlete of the Year.

Organisers of the ITU World Triathlon Abu Dhabi are expecting over 2,000 athletes on the start line for the region’s most prestigious triathlon.

“This is the highlight of the ITU World Triathlon Series calendar so don’t miss out on the chance to watch the sport’s biggest names up close on Abu Dhabi’s magnificent course,” said His Excellency Aref Al Awani, General Secretary at the Abu Dhabi Sports Council who are organising the event. “Professionals, amateurs and first-timers can all line-up in the same event as World Champions and Olympic medallists for what will be a once in a lifetime experience.”