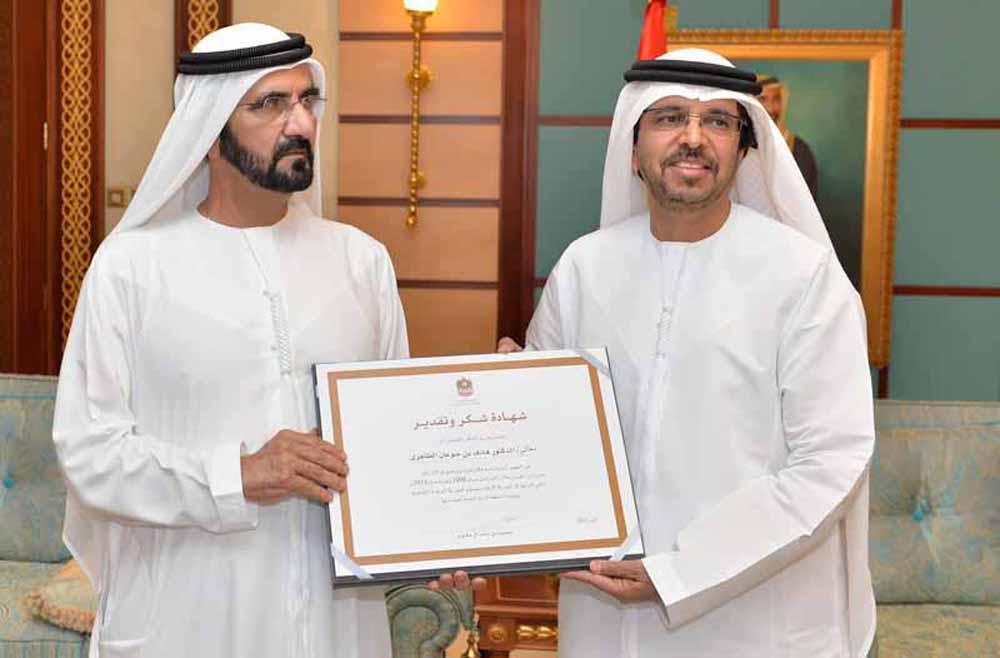 According to a release from Dubai Government Media Office, the no-deficit budget for 2015 will have an operating surplus of Dh3.6 billion, provides for 2,530 jobs, accentuates the social services sector and will continue to stimulate economic growth.

“Dubai managed to move beyond the budget deficit, but kept on increasing expenditure by 9% for fiscal year 2014, which pushes the principality’s macroeconomic growth to be in line with the planned levels,” said Abdul Rahman Saleh Al Saleh, Director General of Government of Dubai’s Department of Finance.

The budget directly applies directives as set by Shaikh Mohammad to focus on a prudent fiscal policy that provides the stimuli necessary to economic growth in the emirate, raise the efficiency of government agencies to provide the best health and social care services for all citizens and residents, according to the statement.

“The benefit of the budget has reflected the directives of Shaikh Hamdan Bin Mohammad Bin Rashid Al Maktoum, Crown Prince of Dubai and Chairman of the Executive Council, who emphasised the need for attention to the social aspect and development of investment incentives, which contributed to the high ranking in global competitiveness,” Al Saleh said.

“The break-even point between government revenues and expenditures has come as a result of strict financial policies of the Supreme Fiscal Committee, chaired by Shaikh Ahmad Bin Saeed Al Maktoum, Chairman of the Committee, which focused on increasing spending for the development of the sectors of the economy, infrastructure, communications, security, justice and safety, government services and excellence, and social development.”

The net estimates of oil revenues accounts for only 4 per cent of government revenue, decreasing by 5 per cent from the fiscal year of 2014. The budget accordingly does not rely on oil revenues. The government revenues rose 11 per cent for the fiscal year 2014, despite lower net oil revenues. The Emirate has cut down the budget allocation from the government investment returns to support the increased allocations reinvested, to contribute to the development of the Emirate’s economic growth.

Distribution of government expenditure figures shows that wages and salaries represented 37 per cent of total government spending, underscoring the government’s desire to support recruitment and human resource support in the emirate, as well as provision of 2,530 new jobs for citizens by working to balance the fiscal year 2015. This is a continuation of the settlement policy and creating new job opportunities for citizens, the Dubai government has adopted 1,650 posts in fiscal 2014.

General and administrative expenses, capital expenditures and grants and subsidies accounted for 44 per cent of total government spending in 2015. The government said it is keen to keep the development, advancement and support of government institutions to provide better government services for citizens and residents on its territory, as well as government support for housing bodies and institutions, sports and public welfare associations, charities and the media to achieve the well-being of citizens and residents and raise the rates of happiness community.

Figures contained in the budget for the year 2015, as well as the interest of the government of Dubai to continue dealing with loans seriously across routing 6 per cent of total spending for debt service, in support of the government’s financial sustainability.

The government will also continue to support human development, as indicated by the distribution of government expenditure in key sectors.

The expenditures on social development in the areas of health, education, housing and community development totals 35 per cent of government expenditure. The government has taken to support social services through continued support for public benefits fund to support families with children, and maternal and child welfare, disabled persons, youth and sports clubs.

According to the release, the “the budget of 2015 re-stressed the great support to the security, justice and safety sector, being one of the most important authorities for the community. The budget has allocated 22 per cent of government spending to support this vital sector.”

“The government’s success in achieving no-deficit balance for the first time since the global financial crisis is a result of applying prudent fiscal policies,” said Arif Abdulrahman Ahli, Executive Director of budget and planning in the Department of finance. “The 2015 balance has been prepared in accordance with rule of using recurrent revenues to finance recurrent expenditures, which is one of the sound scientific bases of fiscal policy. The operating surplus of 3.6 billion dirhams will contribute to the financial sustainability of the principality”.

“The government’s cooperation with the Department of Finance in this regard will enable a smooth and hassle-free implementation of the 2015,” he said.