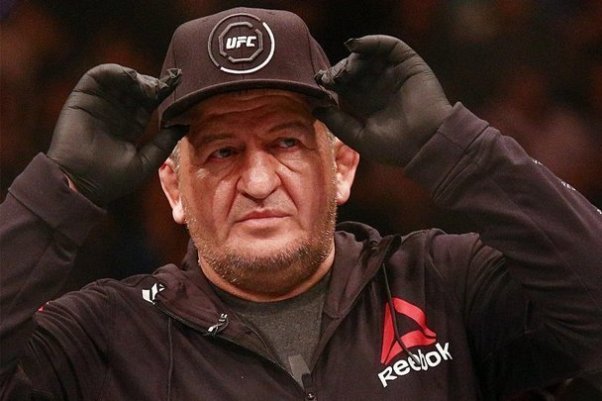 The father and trainer of UFC champion Khabib Nurmagomedov, Abdulmanap, has died at age 57 in a Moscow hospital due to complications stemming from Covid-19 infection.

Russia’s TASS also confirmed the news and provided this translated statement from Kadyrov: “My friends, I have learnt sad news today that Abdulmanap Nurmagomedov passed away. On behalf of all people of Chechnya, I extend my sincere condolences to the family of Abdulmanap Magomedovich. He parted with us having left behind his good name and having brought up a decent generation.”

It was Abdulmanap who introduced Khabib to the world of martial arts when Khabib was eight years old, starting him off with wrestling training before the future MMA star added judo and sambo to his arsenal. He has coached Khabib for the entirety of his career, but due to visa issues was only able to corner him once in the UFC. That moment took place last September when Khabib successfully defended his lightweight title against Dustin Poirier at  UFC 242 in Abu Dhabi.

The elder Nurmagomedov also served as a senior coach for the Republic of Dagestan’s combat sambo national team.

Abdulmanap had been battling health problems since mid-May when he suffered a stroke and was placed into a medically-induced coma. He was initially diagnosed with pneumonia. Khabib later revealed that his father was suffering from heart complications related to the coronavirus and that he had over 20 relatives who had also been infected.

Abdulmanap fell into a second coma less than a week after awakening from the first, but Khabib’s manager Ali Abdelaziz told ESPN in June that Abdulmanap was in a hospital in Moscow and “improving.” On June 22, Khabib said on Russian television that his father’s condition was “still serious” and that while they believed the coronavirus itself was no longer an issue, but noted that “the virus has had consequences for (Abdulmanap’s) kidneys and his heart.”