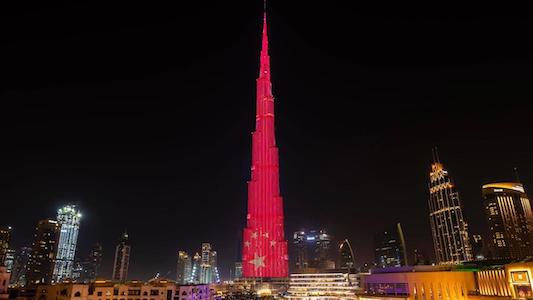 A UAE official has said that the month of May marked a big step for China and the world, as the two major annual political meetings known as two sessions -- the National People's Congress, NPC, the country's top legislature, and the Chinese People's Political Consultative Conference, CPPCC, National Committee, China's top political advisory body -- got underway.

"The activation of these meetings, hosting 5,000 people, represented the biggest gathering of the people since the start of the virus," added Dr. Ali Obaid Al Dhaheri, Ambassador of the UAE to China, in an opinion piece on China Daily.

These meetings demonstrate how the leadership is confident and ready to drive forward the national agenda in China, and show that a degree of control is being reached within the country.

The recent two sessions represented a watershed moment for China, the Ambassador noted. "There has been a lot of talk about COVID-19 and the GDP target. However we should see the bigger picture - the wrapping up of the five-year plan in advance of the next five-year plan unveiling at the two sessions in 2021. These strategic plans are policy blueprints that outline China's overarching strategy intentions, detailing objectives, tasks and measures for economic and social development."

China has set 2020 as the year to eliminate absolute poverty and that goal is nearing success, an objective underlined during this year's two sessions. Since President Xi Jinping was elected general secretary of the Communist Party of China, his leadership has seen more than 70 million rural people lifted over the poverty line. For 2018, the income per capita for China was US$10,000 and China is on track to meet its 2020 target of an income per capita of $12,000.

Since the implementation of reform and opening-up, the vast majority of Chinese people have lifted themselves out of poverty and China has become the first developing country in the world to achieve the UN Millennium Development Goals. China's success, we can call it a miracle, of lifting so many people out of poverty in short decades, means it is eminently achievable that the country will achieve its ultimate target of eliminating absolute poverty this year.

We can consider that these rising living standards set the foundation to complete the moderately prosperous society in all respects, China's strategic medium-term goal for this year. This is the foundation stone for what is to come.

Additionally, the GDP plan set for the decade is projected to be on track. In 2010, a target was for a doubling of GDP between 2010 and 2020. For 2019, the estimates are that the upward swing is continuing and by 2021 the country will be entering a new growth phase.

Efforts to guide the country through this year's choppy economic waters and achieve a doubling of GDP will be supported by a fiscal stimulus package announced at the two sessions of almost $506 billion. The budget fiscal deficit will be at an all-time high of 3.6 percent of GDP, compared to 2.8 percent in 2019. As part of this package, the government will issue $140 billion worth of special treasury bonds and increase the local government special bond quota to $527 billion.

Such an approach will weather any economic challenges, supported by recent measures announced by the central bank this month to boost financial support for small and micro enterprises with new monetary policy tools. This support includes the People's Bank of China's $56.2 billion loan repurchasing scheme from local banks, boosting lending and lowering debt costs and liquidity.

The next five-year plan

The nation's leadership will now be building toward China's 14th Five-Year Plan in 2021. This plan will provide a blueprint for the transition toward a high-income economy, with a focus on four priority areas: digitisation, further opening of the economy and financial markets, green development and support for less-developed regions.

Structural reforms will target service sector developments and improved efficiency and productivity. It is likely that there will be new opportunities in health, pensions and agriculture.

This 14th Five-Year Plan will be central to China's energy transition and global efforts to tackle climate change. There is likely to be a big step toward reducing carbon emissions and a plan to support China's pledge to peak carbon emissions by 2030.

China aims to increase clean energy to 20 percent of the country's energy mix by 2030. Similarly, the UAE Energy Strategy 2050 targets an energy mix that combines renewable, nuclear and clean energy sources, increasing the contribution of clean energy in the total energy mix from 25 percent to 50 percent by 2050 and reducing the carbon footprint of power generation by 70 percent, saving AED700 billion by 2050.

The UAE and China are aligned in these objectives and the bilateral work and future opportunities between our countries reflect that. The UAE contains the largest single-site solar park in the world based on the independent power producer, IPP, model. The 950MW 4th phase of the Mohammed bin Rashid Al Maktoum Solar Park, the largest single-site solar park in the world, is being implemented by Dubai Electricity and Water Authority, DEWA, in collaboration with a consortium led by Saudi Arabia’s ACWA Power and China’s Shanghai Electric.

Digitisation and technology represent an important area for the years ahead. This is a cornerstone of the Made in China 2025 plan to make China dominant in global high-tech manufacturing, next-generation information technology, telecommunications, advanced robotics and artificial intelligence. The UAE already has a strong set of cooperation with China here.

The UAE is expanding science development and during the state visit to China by His Highness Sheikh Mohamed bin Zayed Al Nahyan, Crown Prince of Abu Dhabi and Deputy Supreme Commander of the UAE Armed Forces, memorandum of understanding agreements were reached to this effect, including an agreement for establishing joint research collaboration between Khalifa University of Science and Technology and Tsinghua University.

Bilateral opportunities abound The potential benefits of cooperation across a series of areas between the UAE and China stem from their commonalities. Both of these countries are at a similar stage of development, classed as developing countries by the World Trade Organisation, with aligned development that has greatly aided mutual cooperation. Aspirations of sophisticated, developed and diversified economies are also aligned, providing solid grounding for a valuable bilateral partnership.

On health, the UAE's science advancements already see the nation well-placed to support future developments, particularly in this post-pandemic world. At the two sessions, President Xi Jinping announced that improving public health was a national security concern, underscoring its importance, with reforms of China's health system and greater investments to be made in the sector this year.

The UAE's technological research is making great advancements and our country has much to contribute. Coronavirus laser testing technology, enabling much faster, mass-scale screening testing, is underway. Our country also has patented new and pioneering stem cell research for COVID-19.

The UAE has the second-biggest laboratory in the world outside of China. With this laboratory, China and the UAE are working together in scientific research for the benefit of both countries and we see further opportunities for bilateral cooperation in science here. This strong foundation provides opportunities to continue.

In agriculture, the UAE is now a leader in research in saline and dry condition agriculture, with the field testing of crops and cultivars, irrigation technologies and cultivation methodologies. We are already working with China in this area, in particular the cultivation of saltwater rice in the UAE, to address our nation's food security needs. This successful growth of a salt-resistant strain of rice is the result of a collaboration between China's research centre into saltwater rice, based in the eastern port of Qingdao, and UAE businesses.

The next phase of China's development is now being reached, as China advances toward bringing its moderately prosperous society toward a higher standard of living, achieved through the success of the five-year plan to culminate this year. The next five-year plan will raise the standard of living for Chinese people and advance the nation. As we gear up and move forward to 2021, there are abundant opportunities for bilateral UAE-China cooperation. The post-COVID-19 world will align with the next five-year plan, timely at the opening of the next decade with great aspirations. (Source From WAM)