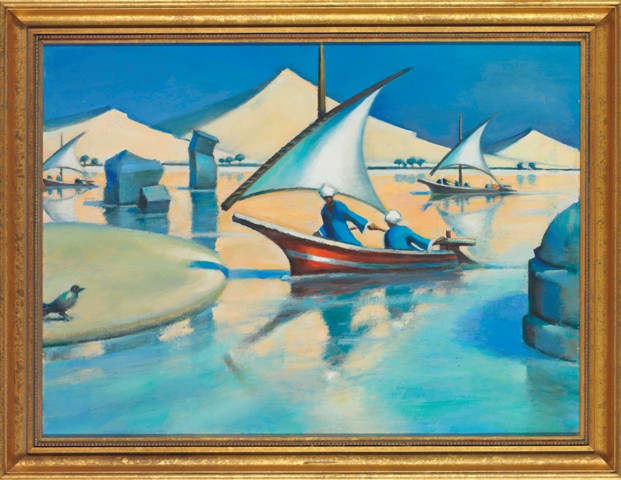 The six works in the auction have been consigned from three private collections that are all part of Mahmoud Saïd’s extended family - Mohamed Saïd Zulficar, the artist’s nephew and one of Queen Farida of Egypt’s brothers; Ismaïl Mazloum, the artist’s cousin on his mother’s side, and Dr Hassan Elkhadem and Nadia Mahmoud Saïd, the artist’s only child. This group spans over four decades of Saïd’s artistic production, starting with Eid Al Adha (circa 1917), followed by Les tombes de Bacos, Alexandrie (esquisse, circa 1927), Portrait of Mohamed Pacha Saïd (late 1920s), Introspection (1930), and the large painting of Assouan – îles et dunes sold together with its preparatory oil sketch both executed in 1949. From religious popular rituals to family portrait, from female portrait to Nile landscapes, from Impressionistic touches to Saïd’s signature vibrant colours, from charcoal drawing to small or large paintings, this ensemble offers a concise and unprecedented overview of Mahmoud Saïd’s eclectic oeuvre.

It is a first in the Middle Eastern art market to offer the preparatory sketch alongside the final composition, therefore Assouan- îles et dunes, both executed in oil on board in 1949 (illustrated first page), a warm sun-lit Nile scene have to be looked at twice to detect small variations and final light changes in the composition. It shows also Saïd’s practice of following the steps of the Old Master painters, for whom it was normal producing a small oil sketch known as “modello” to decide on composition, colours, shading, before starting the actual work. Mahmoud Saïd most likely first travelled to Aswan in 1918-1919 but his first known landscape depicting Aswan dates only from 1947, following which he produced several more over the years 1948-1949 and later in 1953. The colour palette is overall the same in both small and large versions of Assouan – îles et dunes yet the luminous yellow tone of the mountains and the pure cerulean blue of the sky are much more crude in the final work than the ‘modello’’s more subtle palette. Saïd further opts to shift the largest felucca manoeuvred by two men more to the centre of the composition, by moving it from the middle ground (as seen in the ‘modello’) to the foreground in the final work. The vibrant blue touches of the men’s gallabiyah echo the colours of the sky and its reflection in the water but also on the scattered rocks, that typify the Cataract’s topography of the Nile’s shallow waters around Aswan. Both ‘modello’ and final composition were part of the Nadia Mahmoud Saïd and Dr. Hassan Elkhadem collection and will be offered with an estimate of $250,000 – 300,000.

Without doubt, the unique self-portrait or ‘introspection’ offered by Christie’s in this sale is one of Saïd’s most striking and intimate self-representations amidst his eight or nine known self-portraits, four or five of which are drawings. As indicated by its title, Saïd reflects on himself, aged thirty-three in 1930, and unleashes his inner soul in this self-confident and self-assertive portrait. He draws all the attention to his facial expression, particularly with his dark eyes framed by bushy eyebrows that mesmerize and challenge the viewer. Simply wearing a shirt and with his untamed dark hair, his face stands out against the black hatching lines of the background. Omitting all references to his social status, legal position or artistic hobby, he presents himself as a tormented man, driven by passion but restrained by profession. This work was also part of the Nadia Mahmoud Saïd and Dr. Hassan Elkhadem collection and will be offered with an estimate of $8,000 – 12,000. 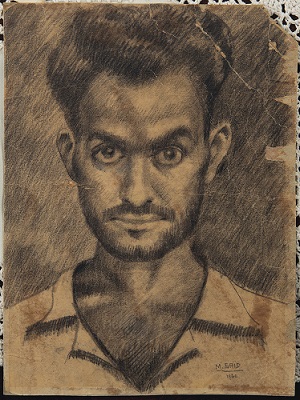 The earliest work in the group of Mahmoud Saïd works being offered is Eid Al Adha, painted circa 1917 and from the Mohamed Saïd Zulficar collection. During his early artistic training with Daforno Casonato and Zanieri, Saïd was hence exposed to Western art tendencies, dominated by Impressionism and Naturalism. Although this training and these trends proved very quickly to be stepping stones for Saïd’s artistic development,

very few works have survived from this early period, of which Eid Al Adha is probably one of the earliest. Characterised by expressionistic brushstrokes and thick impastos, Saïd already demonstrates his fascination with colours and how they emanate light through contrasts, using for example a lime green colour to highlight the dark green clothes of the figures on the left, or a bright blue to sculpt the seated man in the foreground who wears a deep blue gallabiyah. This work bears witness to Saïd’s experiments in capturing a fleeting moment of daily life, and in this particular case he depicts the holy Muslim ritual of the sheep’s sacrifice on the occasion of Eid Al Adha (estimate: $20,000 – 25,000).

The loan exhibition of the Alexandrian master’s 14 works from nine different collections will be on view from 15 to 19 March to coincide with Christie’s auction week. Amongst the 14 works some have been seen before at Christie’s, stretching from the early years in October 2007 to the 10th anniversary auction in March 2016 and to its last sale in October 2016. However, one of the works on view is a recent discovery of a beautiful portrait of a ‘fellaha’ painted in 1951, previously only known through a poor quality black and white image. These works from the loan exhibition will highlight Mahmoud Saïd, the portraitist as well as the landscape painter and accompany perfectly well the six works which will be sold at auction on 18 of March at 7.00pm – a fantastic moment to see a total of 20 works by this master.

Viewing for all Mahmoud Saïd works

Christie’s, the world's leading art business, had global auction, private and digital sales in 2015 that totalled £4.8 billion / $7.4 billion. Christie’s is a name and place that speaks of extraordinary art, unparalleled service and expertise, as well as international glamour. 2016 marks Christie’s 250th anniversary. Founded in 1766 by James Christie, Christie's has since conducted the greatest and most celebrated auctions through the centuries providing a popular showcase for the unique and the beautiful. Christie’s offers around 350 auctions annually in over 80 categories, including all areas of fine and decorative arts, jewellery, photographs, collectibles, wine, and more. Prices range from $200 to over $100 million. Christie's also has a long and successful history conducting private sales for its clients in all categories, with emphasis on Post-War & Contemporary, Impressionist & Modern, Old Masters and Jewellery.

Christie’s has a global presence with 54 offices in 32 countries and 12 salerooms around the world including in London, New York, Paris, Geneva, Milan, Amsterdam, Dubai, Zürich, Hong Kong, Shanghai, and Mumbai. More recently, Christie’s has led the market with expanded initiatives in growth markets such as Russia, China, India and the United Arab Emirates, with successful sales and exhibitions in Beijing, Mumbai and Dubai.

*Estimates do not include buyer’s premium. Sales totals are hammer price plus buyer’s premium and do not reflect costs, financing fees or application of buyer’s or seller’s credits.