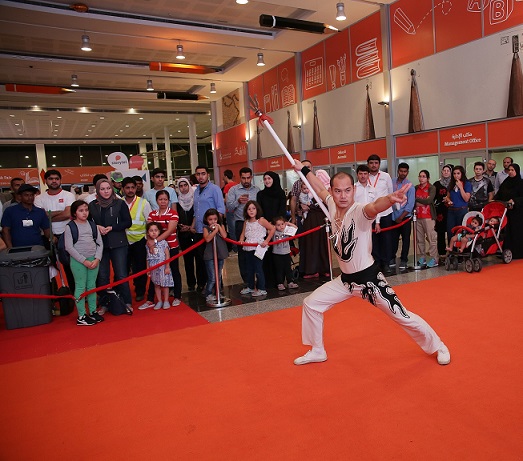 Themed ‘Read More’ and taking place at Expo Centre Sharjah, SIBF 2016 runs from November 2-12 and is hosting 1,681 publishing houses from 60 countries. More than 1.5 million titles will be on display from participating publishers. SIBF is now the third biggest book fair in the world.

The family-run circus, which has toured all over the world, produced a series of acts which stopped the book fair crowds in their tracks at the Expo Centre Sharjah. During the half hour show in the main concourse of the venue, the Beijing-based performers treated the audience to an array of traditional circus acts which showed the crowd dexterity, coordination and strength.

Circus director, Yu Jian said: “We have been to many places in the Middle East, but it is wonderful to be in Sharjah. The feedback has been fantastic for us and the performers are delighted that the crowd have been so interactive. They have appreciated our acts, which is always our main goal as entertainers.

Many of the troupe began training when they were less than ten years old and have been performing since they were twelve. “There is an enormous amount of preparation and rehearsal that goes into an act,” Yu Jian continued. “Although sometimes the acrobats may only be on stage for 15 minutes, they have trained for fifteen years to make sure each performance is perfect.”

Although the show is aimed mainly at children, the audience was filled with spectators of all ages.

“When we start different routines have some fun with the crowds, they like to join in with the atmosphere. We produce highly skilled performances and it’s not just the kids who are impressed. The Sharjah International Book Fair is a wonderful event for us and we look forward to coming back to Sharjah in the very near future.”

The 11-day SIBF attracts thousands of visitors from across the world who are entertained by its extensive program of events and activities.

The fair is open daily from early morning until late evening, bringing together authors, readers, publishers and lovers of the written word.