The Best Multi-Time Zone Watch at the Middle East 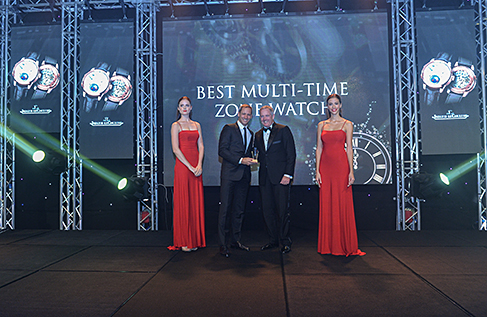 The acclaimed Middle East “Watch of the Year” Awards took place on Thursday, November 27th at the The Ritz-Carlton, Dubai International Financial Centre,

An annual event since 2005, “Watch of the Year” aims to establish industry standards and raise awareness of watch culture and horological craftsmanship across the Middle East.

In keeping with the technical and aesthetic spirit of the creations by the Duomètre line signed Jaeger-LeCoultre, the Duomètre Unique Travel Time watch reveals the various facets of horological excellence by the Manufacture in the Vallée de Joux.

It asserts itself as an absolute reference in terms of mechanical watchmaking and of the intrinsic elegance with which all creations from the Grande Maison have been imbued since 1833.

Past, present and future converge in perfect harmony in this exceptional creation.

For this movement, the Dual-Wing® system is divided into two distinct mechanisms: the first is devoted to displaying the local time, and the second to showing that in a second time zone.

The two mechanisms share the same regulating organ but each has its own independent source of energy, thereby avoiding the losses due to interaction between the mechanisms.

The operation of the dual time-zone display does not in any way influence the running of the watch, a fact that considerably enhances the precision of the watch.

Held for the first time this year in Dubai, alongside the inaugural Salon des Grandes Complications exhibition, the exclusive gala event was attended by over 300 of the region’s most prominent watch collectors, brand representatives and retailers, and well-known social figures. Horological brands were recognised for their contribution to the industry and performance across 11 different categories.