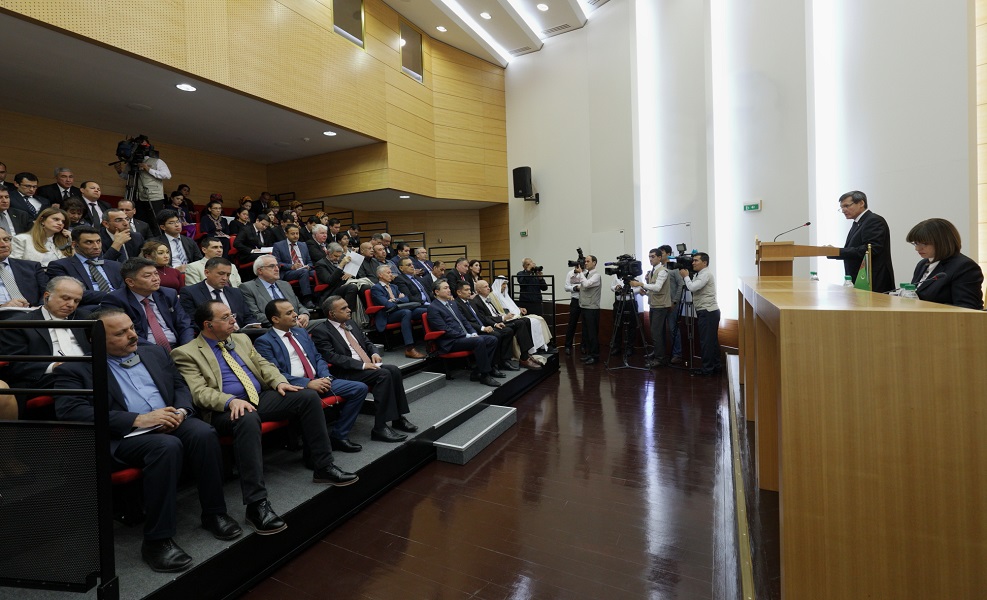 The briefing was attended by the heads of diplomatic missions and representative offices of international organizations working in Turkmenistan, representatives of local and foreign media accredited in the country.

Besides the Minister of Foreign Affairs of Turkmenistan, UN Resident Coordinator in Turkmenistan Ms. E.Panova and Head of the UN Regional Center for Preventive Diplomacy in Central Asia Ms. N.German gave speeches at the briefing.

During the briefing, the head of the Foreign Ministry of Turkmenistan R.Meredov made a special emphasis on the working visit of the President of Turkmenistan on October 25, 2019 to the capital of the Republic of Azerbaijan to attend the XVIII Summit of the Heads of State and Government of the member countries of the Non-Aligned Movement.

It was attended by the Heads of States and Governments of the member countries of the Non-Aligned Movement, observer states and heads of international organizations. In addition, a number of states were represented at this Summit as guests of honor. The Baku Summit of the Non-Aligned Movement made it possible to constructively consider the role and place of the Non-Aligned Movement in the modern world, to discuss issues related to the implementation of its goals and objectives, taking into account current realities and prospects for the long-term development of international cooperation as a whole. Therefore, it was not accidental that the slogan “Ensuring a joint and adequate response to the challenges of the modern world, guided by the Bandung principles” was chosen as the motto of the forum.

In this context, the Minister noted that these fundamental principles, which include respect for fundamental human rights, the goals and principles of the UN Charter, respect for the sovereignty and territorial integrity of all nations, the promotion of mutual interests and cooperation, respect for justice and international obligations, the settlement of all international disputes by peaceful means in accordance with the UN Charter and a number of other areas, formed the basis of the foreign policy of neutral Turkmenistan in the early years of our independence.

It was emphasized that President of Turkmenistan Gurbanguly Berdimuhamedov attended the 18th Baku Summit of the Non-Aligned Movement. The head of state made a keynote speech at this Forum, which assessed the current state of affairs in the world and announced very serious initiatives aimed at resolving a number of pressing issues on the global agenda today.

As the President of Turkmenistan emphasized in his speech “We are convinced that our states should act from a consolidated position in defense of the legitimate rights and interests of developing countries, actively uphold justice and equality in international economic relations, and strongly oppose discrimination, unreasonable, often artificial barriers in the world trade, for the recognition of the economic sovereignty of peoples and states.”

The minister of Foreign Affairs of Turkmenistan also informed the briefing that on October 21-23, President of Turkmenistan Gurbanguly Berdimuhamedov carried out a working visit to Japan. During the visit, the Turkmen-Japanese business forum and a number of bilateral summits were held. As a result of the meetings, a solid package of bilateral documents was signed between Turkmenistan and Japan.

R.Meredov also noted that on October 27, 2019, meetings were held between the President of Turkmenistan Gurbanguly Berdimuhamedov and the Prime Minister of Malaysia, Dr. Mahathir Mohammed, who arrived in the capital of Turkmenistan on an official visit.