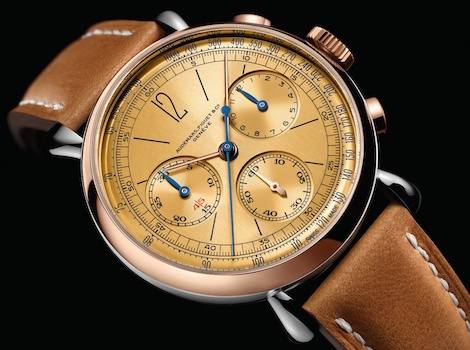 To celebrate the opening of its Musée Atelier, the Manufacture has created a new take on one of its exceedingly rare chronographs from 1943.

Audemars Piguet’s vintage chronograph wristwatches are among the rarest in the world with only 307 examples made between the 1930s through the 1950s. Named [Re]master01, this new selfwinding flyback chronograph speaks directly to the blend of tradition and forward thinking which continues to permeate Audemars Piguet’s

creations. This limited edition of 500 watches evokes all of the design attributes of the original, featuring a round stainless steel case and teardrop lugs enhanced by 18-carat pink gold bezel, crown and pushers. The gold-toned dial is complemented with a blue tachymetric scale, pink gold hour, minutes and seconds hands, as well as blue chronograph hands. The watch comes with a light brown hand-stitched calfskin strap as well as an additional brown alligator strap.

Similarly to the 1943 wristwatch, [Re]master01 features the logo “Audemars Piguet & Co Genève.” From around 1885 to the mid-1970s, the Manufacture had a workshop in Geneva to be closer to end-clients and facilitate distribution within Europe and beyond. When Audemars Piguet started to sign its watches around the 1920s and 30s, the city of Geneva was frequently mentioned on the dial. The Audemars Piguet logo featured on [Re]master01 thus celebrates the Manufacture’s cultural openness to the larger world despite its deep rootedness in the Vallée de Joux.