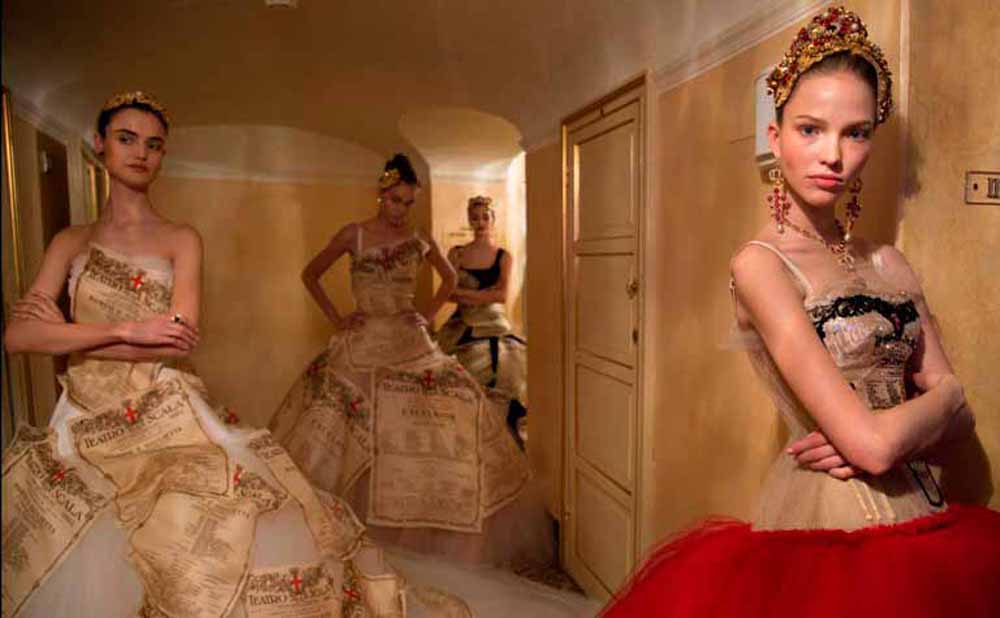 This is the first time Teatro alla Scala opened its doors to host an event like this and so it was to turn into a celebration of Italian fashion at its best as well as a to the great legacy of this incredible institution. The Alta Moda collection itself was inspired by the ballet and in particular the Accademia del Teatro Alla Scala, whose dancers punctuated the show with performance. The company principals, the world famous Roberto Bolle and his partner Beatrice Carbone, appeared throughout the show captivating the audience not only with their graceful performance but also with the heavily embellished costumes made especially for the event.

La Scala is a world-renowned opera house in Milan, Italy. The theatre was inaugurated on 3 August 1778 and was originally known as the New Royal-Ducal Theatre alla Scala (Nuovo Regio Ducale Teatro alla Scala). Most of Italy's greatest operatic artists, and many of the finest singers from around the world, have appeared at La Scala during the past 200 years. Today, the theatre is still recognised as one of the leading opera and ballet theatres in the world

The hoary tradition and legacy of this Milan theatre’s history where theatre, ballet and musical performances were showcased, drawing the cream of Italy’s society dressed in their decadent and luxurious best, where trade deals were struck (and where even casinos had apparently featured in the past), formed the perfect venue for Dolce & Gabbana’s Alta Moda collection. It blended a choice of exquisite fabrics: tulle ruched and draped around the body with every seam was highlighted by delicate sequins; suiting and capes in embellished astrakhan; neat fitted dresses with crystal buttons running down the spine and a finale of epic fantasy gowns decorated with silk scarves printed with a 1950 programme for Romeo e Giulietta. Each of the pieces in Dolce & Gabbana’s Alta Moda collection stands unique and is painstakingly made by hand in Milan at the Dolce & Gabbana Sartoria by a team of 80 specialist tailors.

It was a grand tribute to couture’s undying spell as the rock bed of fashion. We may debate its relevance in the jet set world of today, but couture will always stand as the finest expression of Life’s innate essence, its beauty and its festivity which we in the rush of things often overlook…