Dubai Airshow 2017 To Be Biggest Ever 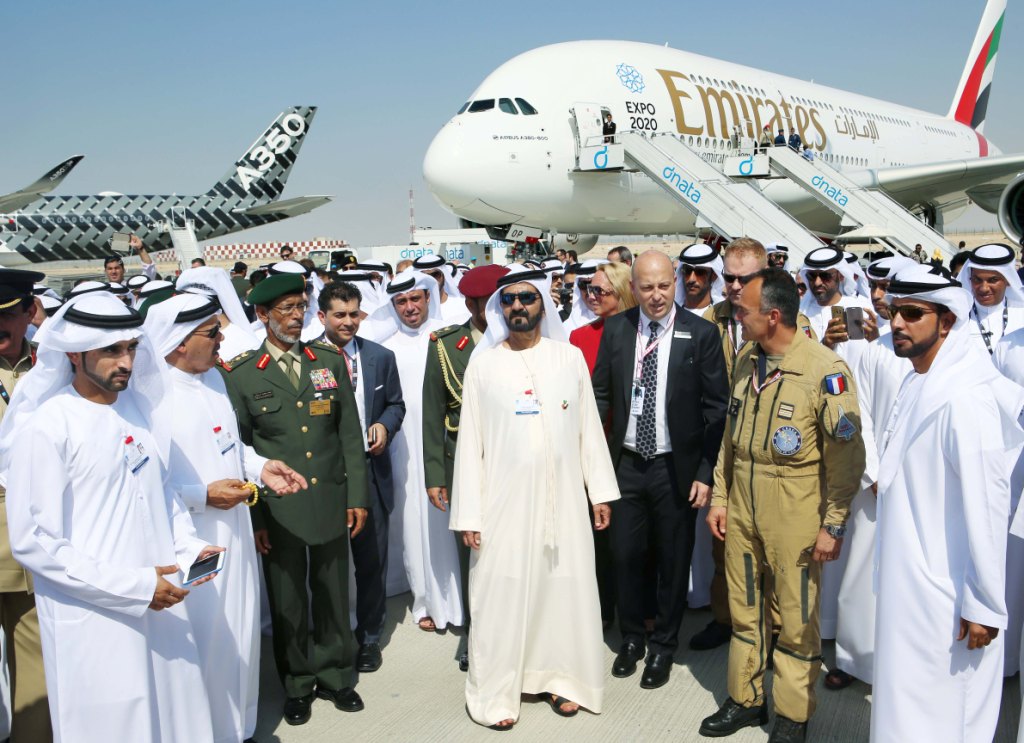 The static display at the Dubai Airshow will feature over 160 of the latest commercial, business and military aircraft when the show opens on 12 November. With many coming from around the world in addition to those from the UAE, exhibitors and visitors alike can see the best that the aerospace industry has to offer at the DWC, Dubai Airshow Site.

New for this year will be the Sukhoi Superjet 100 and the Japanese Air Force Kawasaki C2, in addition to first time exhibitor Calidus displaying not one but two aircraft: the B-250 Bader and the TX-C.

Military might on display will include SU35, Dassault Rafale, the Taqnia/Antonov AN-132, the IOMAX S2R-T660 Archangel and a PAC JF-17 Thunder. In addition, helicopters are well represented with a Turkish Aerospace Industries T129 Atak Helicopter, the Motor Sich Mi2 and Mi8 MSB-T.

“The aircraft that we are expecting on the static display at the Dubai Airshow 2017, like the show itself, represent all sectors of the aerospace industry,” said Michele van Akelijen, Managing Director of show organisers Tarsus F&E LLC Middle East. “We’re seeing lots of returning favourites, like the Emirates A380 and several jets in the Gulfstream family, plus some new and exciting inclusions such as the Calidus Bader 250.”

“We are also very pleased to again see the inclusion of unmanned aerial vehicles, such as the Turkish Aerospace Industries Anka MALE Class UAV which are a particular focus at the show this year, with the UAS Summit taking place for the first time.”

Business aviation, a market which is growing in the Middle East, is always heavily represented at the Dubai Airshow and this year is no exception with around 50 business aircraft expected on the static park, including a Gulfstream G650ER and Bombardier Global 6000; while Emirates Airline will be displaying its all business class ACJ319.

Also on display will be the Airbus A350 and Boeing 787-10 Dreamliner, while both Emirates Airline and Etihad Airways will be exhibiting their flagship A380s and Flydubai will be showing its Boeing 737 MAX 8. Among other aircraft on the static park will be Honeywell Boeing 757-200 and Diamond DA50 Super Star.

The region is at an exciting point in its advancement within the space sector – many countries are acquiring and developing their own satellites, building their next generation of engineers and embracing technological advancements both in industry and on a personal level. In addition, the UAE’s investments in space technologies have already exceeded AED 20 billion (USD 5.4 billion) while its ambitions include the Mission to Mars Hope mission planned for 2021.

“I am excited to attend the Dubai Airshow for the first time, to see first-hand how the UAE’s vision for leadership in aerospace and aviation supports this world-class event, and to see how the event creates excitement and support around the world for the UAE’s vision,” noted Col. Worden. He continued “I am especially honoured to be invited to participate in the show’s Space Pavilion Conference as an advocate for STEM education. For explorers of all ages, on earth and across the universe, Science, Technology, Engineering and Math are the most vital tools of the trade.”

The Space Conference at the Dubai Airshow takes place 13-14 November and is accompanied by a dedicated pavilion within the exhibition hall, where relevant companies including the UAE Space Agency, Centre national d'études spatiales (CNES) and ISS Reshetnev will be exhibiting side-by-side for the whole five days.

“The addition of the Space Conference and Pavilion is one of the new features for 2017 that is ensuring the Dubai Airshow continues to represent all sectors of the aerospace industry,” say Michele van Akelijen, Managing Director of show organisers Tarsus F&E LLC Middle East. “We are proud to be able to include Col. Worden in the event and look forward to hearing about his unique experiences as the UAE Space Agency leads the country towards an exciting future.”

The Space Conference at the Dubai Airshow takes place 13-14 November and is accompanied by a dedicated pavilion within the show hall supported by industry leaders Orbital ATK and he Boeing Company, where relevant companies including the UAE Space Agency, Centre national d'études spatiales (CNES) and ISS Reshetnev will be exhibiting side-by-side for the whole five days.