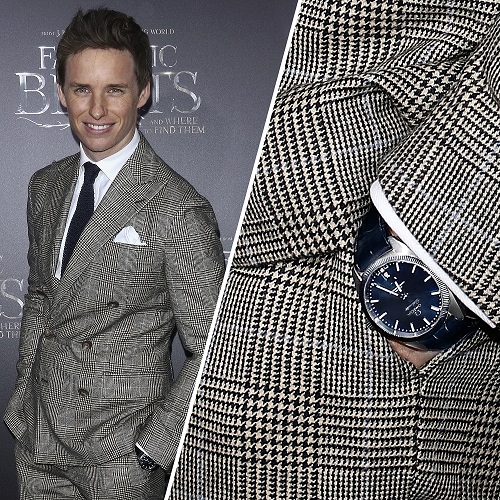 Oscar winning actor and OMEGA brand ambassador Eddie Redmayne walked the red carpet on Thursday night in New York City to celebrate the world premiere of his new film Fantastic Beasts And Where to Find Them.

The event was held at Alice Tully Hall, Lincoln Center, and Eddie proudly wore an OMEGA Globemaster with a blue dial and strap.

The film is an extension to the Harry Potter universe and is certain to be a popular talking point in the weeks and months ahead.

The Globemaster is already a legendary name in the OMEGA family. Now it has been updated to become the world's first Master Chronometer, further enhancing its reputation within the watchmaking industry.

Its stainless steel case features a hard metal scratchproof fluted bezel, with a rhodium-plated Constellation star, and hands and indexes which have also been filled with illuminous Super-LumiNova. The caseback includes a stainless steel Central Observatory medallion, while the sun-brushed blue "Pie Pan" dial is reminiscent of the first 1952 Constellation model.

This colour design is continued with a blue leather strap. It is driven by OMEGA's Co-Axial Master Chronometer Calibre 8900, featuring revolutionary anti-magnetic technology.