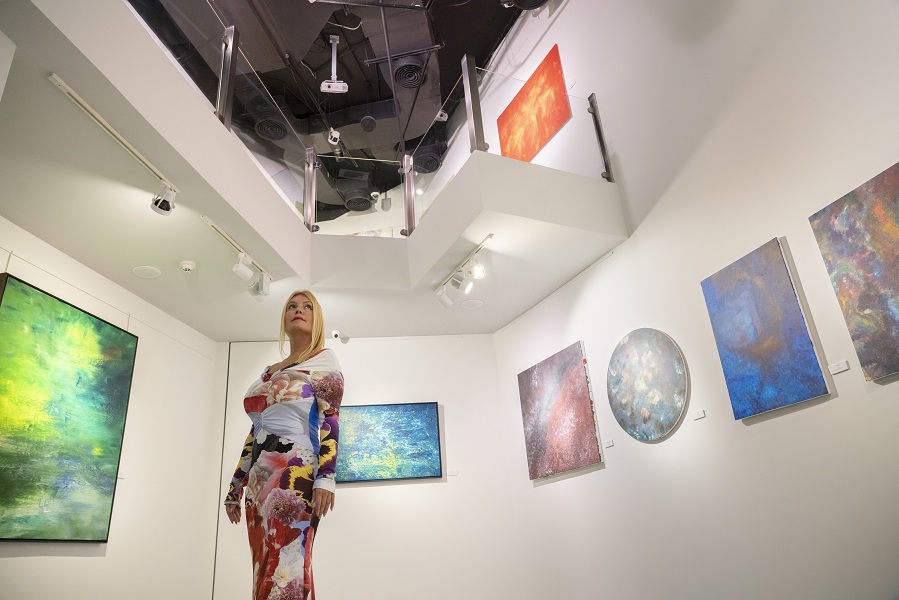 At times dramatic, at times serene, but always in sweeping motion, abstract artist Rima Chahine’s artworks provoke a fierce eruption of emotions in the viewer.

An artist who has taken art lessons and knows all the rules of art but would rather follow her own instincts and someone whose observations of life and living have been primarily her school of art, she has developed the high seriousness, acute sense of colour, a particular kind of dreamy ambience and action filled brush strokes, which leave the viewer enthralled and the canvas with very little left to say.

She does not hesitate at the shore; she plunges into the canvas as someone to the manor born, perhaps facilitated by this very lack of rigid formality in her weltanschaaung. She is also not shy in applying colours. Acrylics in blazing reds, fecund greens, untamed yellows and glorious blues, rivet the eyes. Chahine lets her hair down to uplift her art. Her colours are coded: yellow stands for happiness; red indicates passion; green is for stillness and blue for healing; orange also points to happiness.  But she does not do much with the black colour; maybe because it is very special. Black, for her, is a combo of sadness and strength. This is a fine line she says, perhaps saying it all.

An artist with Middle Eastern roots (she is of Lebanese origin), and with Canadian nationality, she is besotted by Montreal’s autumn colours. The early snow which is more caressing than biting, the short Indian summer that warms one without heating him and most of all, the best leaf-peeping time in perhaps all the world, are total inspirations. When leaves start to change colour and a rainbow of reds, oranges, gold and yellow envelop the city, it is the ideal time for Chahine to breathe in the air and breathe out the art. She does not do things in solos. For her, the individual is the universal and she says she feels the emotions every human being feels. So her pieces have the grand swoop of an orchestra, instead of being songs sung solitary.

The musical simile could be appropriate: Chahine says she works best to the sound of music. She has a liking for Pavarotti and also Syrian singer Mayada Al Henawy, especially her ‘El Hob Elli Kan’. But what comes out the headphones or the sound system, depends on her mood. “I cannot paint without music!” she says. “Music brings emotions and colours and feelings”. She is inclusive to a fault: there are few things she cannot see and paint. “When I go outside, I absorb people’s energies!” she says. “I have a very light taste. I can make common things look rich”. But she can also be exclusive. “It is the personality of the artist”, she says. “Sometimes one wants to communicate, sometimes one wants to be with one self. I express myself with art. With art, I am myself!”

She is the connection between people and the landscape. She imparts her emotions to them, having churned them in the whirlpool of her personality.    But she has an entrepreneurial side too. Emotions, colours and subjects may sweep her off her feet. But she is too rooted in her mind not to know that everything in art has a price, and that location sometimes decides the cost.

Thus she decides that her work ‘Serenity’, which trumps fear through intuition, is ideal for a modern luxury interior. According to her, it adds warmth and identity to space. “This piece also adds a softer touch to the industrial loft style interior”, she notes. ‘Zen Garden’ has colours swirling in unison with fiery reds and soothing greens, embraced by warm yellow. Looking like a mountain side bedecked with flowers or the slope of a man made garden, ‘Deep Thoughts’ drive you on purposefully, in sync with the dynamics of the painting. There is no time for doubts or backward glances. ‘Lightning’, done in a chorus of blue, seems to be a drone’s eye of the world, seen from the camera of a drone that can fly very high. Bursts of light fall on a receptive earth, awaiting fertilisation. It is a magnetic slice of life, when sky, earth and space come together.

“That appetite for life that never leaves, even when you stop believing in yourself”, proclaims ‘Volcano Heart’. “Your passion inside and that little voice will follow you and guide you to your calling”. This picture is a portion from the artist’s life, when she had nothing to go on with, except her faith in herself. The fireballs of self-confidence and the lava of ambition are plain to see. ‘New Earth’ and ‘Life’s Landscapes’ reveal the maturity and mastery of the artist. Both compositions deal with life, but are studies in contrast.

All the emotions she has ever felt are on in-your-face display on her canvas, done in radical chic style. “I don’t have the patience for delicate lines!” concludes Chahine. Painting is part of her reclusive self. It is like meditation, where all the angst comes out, catharsis occurs and peace prevails. “I like to see paint happening”, she says. “Perhaps I didn’t find love with people and wanted to find something not related to the external world”. In art she found what is dependable. She is an artist who says she does not dream or think in paint. Art is an unconscious utterance for her, rather like Picasso’s regressive journeys, Van Gogh’s sadness and restlessness (“he knew how to express loneliness”) and Monet’s calming effect.  You could in fact draw a classic sketch of her work line from the clues she has given, for an understanding of her art, starting from Van Gogh (trepidation), moving through Picasso (the subconscious) and ending with Monet (calmness).   “One morning”, she says, “I dreamed. And I do. I don’t dream to do!”  In showing how it is done, she has shown how it can be done.

Rima Chahine has also been awarded as a winner in Abstract Art Category of Global Art Awards 2018 at FIVE Palm Jumeirah.