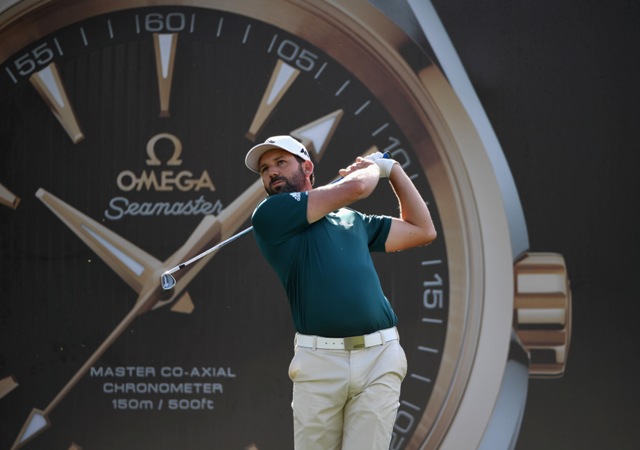 With back-to-back birdies on the 13th and 14th Stenson applied some pressure, but the 37-year-old held his nerve, producing a stunning tee-shot on the 15th and a brilliant up-and-down on the next to ease to victory.

With this victory, his 12th on the European Tour and first in two years, Garcia continued a great Spanish run of success in the ‘Major of the Middle East,’ inscribing his name on the iconic Dallah alongside the great Seve Ballesteroes (1992), Jose Maria Olazabal (1998), Miguel Angel Jimenez (2010), Alvaro Quiros (2011) and Rafa Cabrera Bello in 2012.

“I'm very happy to play the way I played. The way I handled some of the key moments and to beat Henrik, we all now how great a player he is,” said Garcia after receiving the winner’s trophy from His Highness Shaikh Ahmed bin Mohammed bin Rashid Al Maktoum, President of the UAE National Olympic Committee.

"Even on the 18th with a four-shot lead I knew that I needed to hit a good third shot because you can mess it up a little bit there if you're not careful,” said Garcia, who is also an OMEGA brand ambassador.

"Henrik is always there so you've got to stay calm and collected with him. It's a great start to the year so we're going to try to keep going the same way," said Garcia who was making his eighth appearance in Dubai.

Stenson felt event though he didn’t quite play to his best, he still managed to narrow the gap.

"I was three shots back at the start of the day and Sergio made an early birdie so I was trailing all day, I was expecting that. I still managed to sneak a couple of birdies in there in the middle of the back nine and move closer,” said Swede, who finished tied eighth in Abu Dhabi two weeks ago.

“You've got to push when you're behind and we got the wind slightly wrong there on 15. I over-hit it a little bit at the same time. That's obviously where it all kind of finished.

“At the same time, Sergio hit a lovely shot to about two and a half feet and it was pretty much game, set and match on the 15th green. I'm just working away on my game, trying to move all the positions forward and the time when we want to be peaking is obviously early April. So that's what we're working towards and it's good, steady progress."

Denmark’s Jensen Lasse, who missed his first four cuts of the season, carded a final round 65 to share third with England’s Tyrrell Hatton, who made it seven top 25s in a row with a closing 67 that contained six birdies and a bogey.

Fellow Englishman Fitzpatrick also signed for a 67 despite a double-bogey on the eighth, while American Uihlein carded a closing 69.

South African duo George Coetzee and Brandon Stone were at 11 under, a shot clear of two-time champion Stephen Gallacher and Swede Magnus A Carlsson.

Meanwhile, MENA Golf Tour prodigy Rayhan Thomas finished in a tie for 60th place on three over after closing with a 74, but retuned home richer in experience despite forgoing € 7,014 in winnings because of his amateur status.

The Omega Dubai Desert Classic is backed by OMEGA as the title sponsor and Emirates Global Aluminium PJSC as sponsor. The co-sponsors are: CNN, Drydocks World, Emirates NBD, Gulf News, JA Resorts & Hotels, Mercedes-Benz and wasl, while Dubai Duty Free, Neocasa Interiors and Motivate Publishing are the Patrons in golf in DUBAi's drive to showcase the emirate's vibrant golfing scene to a worldwide audience.