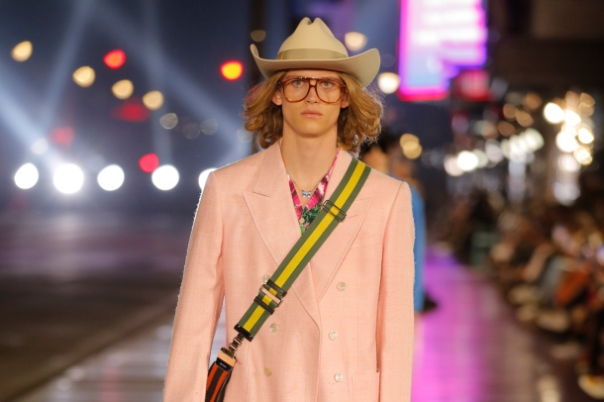 The stars were out in more ways than one at Gucci’s Spring/Summer 2022 ready-to-wear show, set upon the iconic Hollywood Walk of Fame and TCL Chinese Theater on Hollywood Boulevard. — The place where stars like Marilyn Monroe, Lucille Ball, Clark Gable, and Judy Garland are immortalized with cemented handprints – Alessandro Michele hosted a bevy of A-listers, fashion insiders, and influencers to enjoy his “Love Parade,” which essentially paid homage to some of the people who made Hollywood, well, Hollywood.

“Mum worked in the film industry as an assistant in a production company,” recalls Michele in the show notes. “I remember all the stories she told me, and the details and the sparkles, about that dream factory. There was the alabaster paleness of Marilyn Monroe and her diaphanous voice. There were the black satin gloves of Rita Hayworth and Veronica Lake’s velvet hair, as well as the bewitching allure of Rock Hudson and Kim Novak’s dizzying transformative power. Everything felt like a fairy tale.” 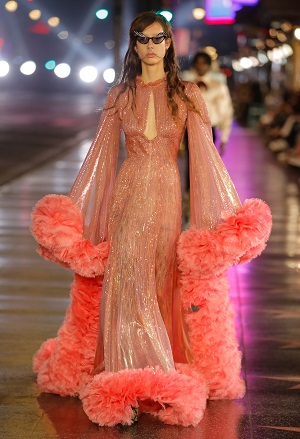 For this presentation, the creative director wanted to capture the indefeasible gift of dreaming and the mythopoetic aura of cinema, hence he chose Hollywood Boulevard to set this scene. “This boulevard of stars lends perfect support to my uncurbed love for the classical world,” says Michele. “Hollywood is, after all, a Greek temple populated by pagan divinities. 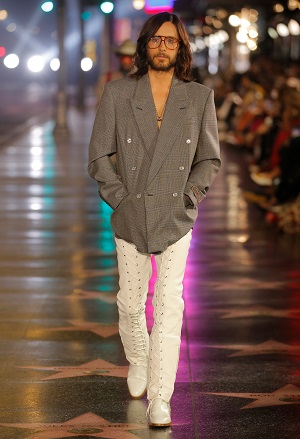 Here actors and actresses are acknowledged as heroes of the myth: hybrid creatures with the power to hold divine transcendence and mortal existence at the same time, both the imaginary and the real. They are the idols of a new contemporary cosmogony, embodying a persistence of the sacred. Aphrodite, Theseus, Pandora, and Medusa still live in Hollywood’s Olympus. Beyond reach, and yet, so human.”