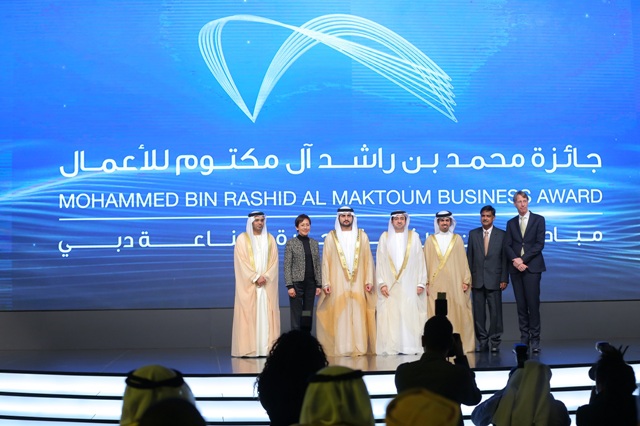 Held under the patronage of H.H. Sheikh Mohammed bin Rashid Al Maktoum, UAE Vice-President and Prime Minister and Ruler of Dubai, the ceremony was hosted by the Dubai Chamber of Commerce and

Industry, and attended by heads of government departments and officials.

In his welcome address, H.E. Majid Saif Al Ghurair, Chairman, Dubai Chamber, explained that the Chamber launched the MRM Business Award in 2005 as a mechanism to drive institutional performance and measure business excellence within the UAE, adding that award has expanded significantly since then with more than 1,400 companies across the GCC region participating in the programme.

He added that the MRM Business Innovation Award was launched by the Chamber in cooperation with the UAE Ministry of Economy in 2015, and reflects the strong interest from the private sector to embrace innovation.

Commenting on the awards, H.E. Sultan bin Saeed Al Mansouri, UAE Minister of Economy and Chairman of the Panel of Judges for the MRM Business Award and the MRM Business Innovation Award, stated that participating companies have integrated best-in-class practices into their business models, operations and activities, enabling them to improve performance and boost their competitiveness.

H.E. Al Mansouri announced that the UAE Ministry of Economy is planning to launch the Social Innovation Award, which will include seven sectors identified by the National Innovation Strategy, namely renewable energy, transport, healthcare, education, technology, water and space. The new award, which supports the UAE’s Year of Giving initiative, aims to encourage and advance scientific, social, industrial and commercial innovation, research and development in the UAE. Award winners will be honoured at a ceremony in December 2017.

During the awards ceremony, H.E. Hamad Buamim, President and CEO, Dubai Chamber, and Chairman of the Steering Committee for the MRM Business Award, stated that driving innovation within the private sector is a key focus of the Chamber’s new strategy for 2017-2021, adding that innovation has become a necessity for businesses to compete in fast-changing markets.

H.E. Buamim added that Dubai is an ideal setting to launch and host the MRM Business Awards, as it’s a place that is always looking to the future and embracing new technologies and solutions to improve the lives of its citizens and residents.

It was announced during the ceremony that the next cycle of the Awards would focus on the theme of happiness and positivity. The initiative will be launched in coordination with H.E. Ohood Al Roumi, UAE State Minister for Happiness, and support the National Happiness and Positivity Charter.

Headlining the ceremony was Ron Kaufman, a renowned motivational speaker, author and customer service expert. He shared his insights on service excellence, performance and quality, as well as best practices that can be used by companies to create a service culture within their organisations.

Established in 1965, the Dubai Chamber of Commerce & Industry is a non-profit public entity, whose mission is to represent, support and protect the interests of the business community in Dubai by creating a favourable business environment, supporting the development of business, and by promoting Dubai as an international business hub.