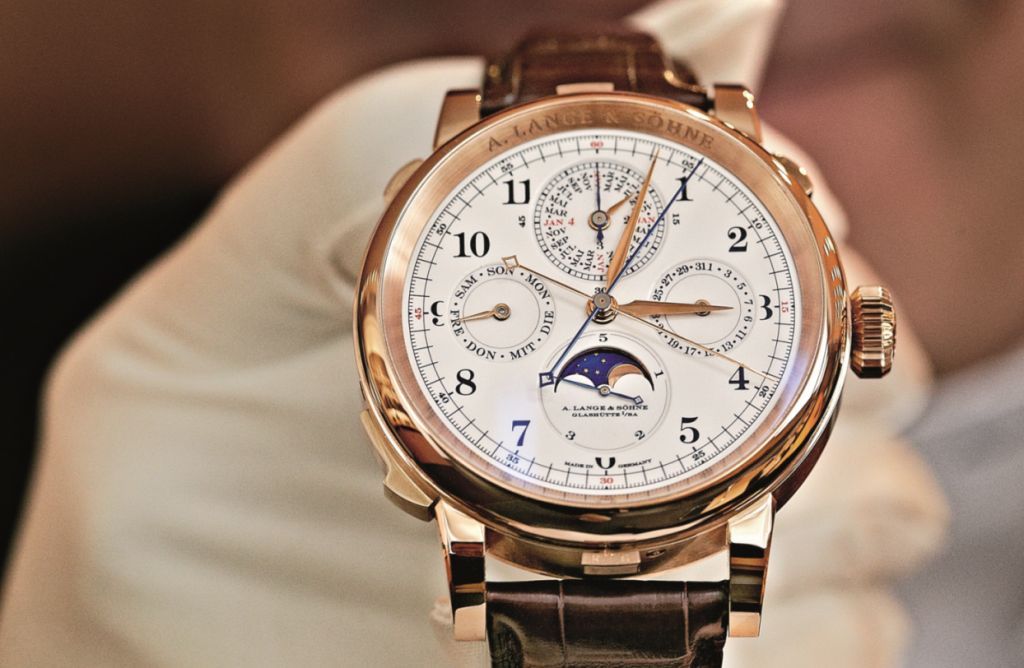 The development of the GRAND COMPLICATION is a perfect culmination of the brilliance of A. Lange & Sohne’s forbears and the virtuosity of today’s watchmakers, ascending to the very pinnacle of haute horology. Limited to just six pieces, it brings to life the most elaborate complications in haute horlogerie ever: Chiming mechanism with grand and small strike, minute repeater, split-seconds chronograph with minute counter and flying seconds as well as a perpetual calendar with moon-phase display. Aviamost captures its intricate working in this special feature…

In January 2013, A. Lange & Söhne presented the most complicated wristwatch ever built in Germany. Only six of these oeuvres will ever be crafted, and the first one has now been handed over to its owner. The assembly of the movement alone requires an entire year for each watch.

The GRAND COMPLICATION pays homage to the grand tradition of Saxon precision watchmaking and also marks the dawn of a new era in the history of A. Lange & Söhne. According to Lange’s senior developer Anthony de Haas, the development of this complication and its fascinating chiming mechanism “unleashed creative momentum among our product designers and opened up a wide passageway for new solutions.”

Only the most talented and experienced watchmakers have the skills needed to master the challenges associated with the assembly and intricate adjustment of the 876-part movement. The task requires in-depth expertise, concentration, dexterity and – above all – patience.

A carefully crafted mechanical timepiece is a miniature marvel of artistry and precision. Beneath the lucidly configured enamel dial of the Grand Sonnerie, the horological opus with the calibre designation L1902 incorporates scores of lavishly finished parts.

A sound of inimitable purity

Two carefully hand-wrought gongs produce the seductive tones of the minute repeater and of the hour and quarter-hour strikes. The GRAND COMPLICATION is endowed with a chiming mechanism that automatically indicates the time in the grand strike (grande sonnerie) or small strike (petite sonnerie) modes. Every fifteen minutes, when set to grande sonnerie, it first indicates the full hour on the low-pitched gong and then the quarter-hours with a double strike on both gongs. In the petite sonnerie mode, it indicates the elapsed quarter-hours with one, two, or three double strikes on both gongs. At the top of every hour, it strikes the time in hours on the low-pitched gong.

The chiming mechanism is powered by one of a total of three mainspring barrels, wound with the crown. Turning it clockwise tensions the springs for the going train and the chronograph, while the chiming mechanism barrel is wound in the opposite direction.

Accurate to one-fifth of a second

The chronograph of the GRAND COMPLICATION is a monopusher type (chronographe

monopoussoir) with a rattrapante function and flying seconds (seconde foudroyante). This rare supplementary function makes it possible to freeze stopped times to fifths of a second. A blued-steel hand on the lower subsidiary dial performs five jumps to complete each revolution along its five-second scale while the chronograph is running. Thus, the hand precisely emulates the balance frequency of 2.5 Hz.

A calendar for eternity

The perpetual calendar mechanism not only knows the different durations of all months in the course of a year, it is also aware of the fact that February has 29 days in leap years. The mechanism first needs to be corrected by one day in the year 2100.

Another special feature of the calendar is that it advances all displays, with the exception of the moon phase, at midnight. The calendar indications are positioned at 3, 9 and 12 o'clock. The subdial on the right indicates the date, the one on the left the day of the week, and the upper one the month in the four-year cycle. The upper half of the flying seconds dial exposes the blue-enamelled, solid-gold moon disc that precisely tracks the synodic lunation of the earth’s companion.

Tribute to a grand tradition

The heart of the exclusive manually wound movement is a balance that beats with a frequency of 18,000 semi-oscillations per hour. As a tribute to Ferdinand A. Lange, who established Saxony's watchmaking heritage, the watch incorporates a Glashütte lever escapement based on one of his early inventions.

When the mainspring is fully wound, it delivers a power reserve of 30 hours. All parts of the complex manual winding movement are manufactured and lavishly finished by hand to the strictest Lange quality criteria.

The exclusive collectors' item in the 50mm pink gold case comes in a limited edition of six watches. Thus, the GRAND COMPLICATION is not only immaculate from the technical point of view it is also a rare horological work of art.

Key steps to a Masterpiece

Here are some of the most important of the thousands of steps needed on the way to the genesis of a horological masterpiece which have been photographically documented:

The quality of the gongs determines the sonority of the chiming mechanism. Here, the foot of the gong is fashioned into a triangular shape with a diamond file so it can vibrate better when struck.

Assembly of the racks

The three racks of the chiming mechanism are key elements that control the hour, quarter-hour and minute strikes. The quarter rack shown here triggers one to three double strikes for 15, 30 and 45 minutes after the top of the hour. It is made of hardened steel and decorated with straight graining on the upper side.

Assembly of the gathering pallets

The gathering pallets in hardened steel are deflected by the teeth of the racks and must be painstakingly fine-tuned by hand to ensure pure sonority. Via arbors, they are connected to the hammers which strike the gongs and generate the sounds.

The chiming mechanism is powered by a separate spring barrel and features its own wheel train with a lever escapement that ensures the uniform operation of the mechanism. The lever’s shape is so complex that after it has been mechanically produced, it has to be manually adjusted with a brass disc and abrasive paste.

Assembly of the flying seconds mechanism

The flying seconds hand displays stopped times to an accuracy of one-fifth of a second. When the chronograph is started, two superposed five-point stars that share the same arbor will begin to rotate about their axis once per second. During the process, a 30-tooth brass wheel, stops and releases them five times per second.

Alignment of the rattrapante arbor

The 0.292 mm rattrapante arbor is about 17.4 mm long and extends from the dial to the rattrapante wheel on the underside of the movement. Because stresses occur in the material when the arbor is turned, it must be aligned on a specially made brass block before it is installed.

The “Glashütte lever escapement” pays tribute to Lange’s legacy: Its lever and escape wheel are made of hardened 18k gold and its making involves considerable manual work.

With a milling cutter designed by Lange especially for this purpose, tiny slots are cut into the balance wheel rim right next to the bores. To prevent the cutter from overheating, it is cooled with a brush dipped in ethyl alcohol.

About A. Lange & Söhne

Dresden watchmaker Ferdinand Adolph Lange laid the cornerstone of Saxony’s precision watchmaking industry when he established his manufactory in 1845. His precious pocket watches remain highly coveted among collectors all over the world. The company was expropriated after World War II, and the name A. Lange & Söhne nearly vanished. In 1990, Ferdinand Adolph Lange’s great-grandson Walter Lange had the courage to relaunch the brand.

Today, Lange crafts only a few thousand wristwatches in gold or platinum per year. They are endowed exclusively with proprietary movements that are lavishly decorated and assembled by hand. With 54 manufacture calibres developed since 1994, the brand is recognized as one of the world’s finest watch brands. Brand icons, such as the LANGE 1 with the first outsize date in a regularly produced wristwatch and the ZEITWERK with its precisely jumping numerals display, rank among the company’s greatest successes. Sophisticated complications such as the RICHARD LANGE PERPETUAL CALENDAR “Terraluna”, the ZEITWERK MINUTE REPEATER and the DATOGRAPH PER-PETUAL TOURBILLON reflect the manufactory’s determination to achieve ever new pinnacles in horological artistry.