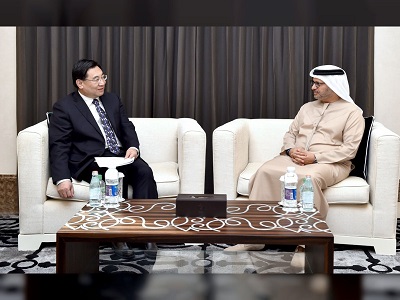 Gargash and Heping discussed cooperation and ways to enhance bilateral relations in all fields between the UAE and China.

The UAE is a key component of the Belt and Road Initiative, said Hu Heping, Member of the Central Committee of the Communist Party of China, CPC, in Shaanxi province, the People’s Republic of China, during a lecture hosted by the Emirates Centre for Strategic Studies and Research on Sunday.

The lecture was titled, "The Communist Party of China’s Ideas on State Governance in the Seventy Years since the Establishment of Modern China".

Heping explored China’s policy that aims to promote increased cooperation with the UAE, emphasising current relations and prospects for deepening relations, particularly concerning the Belt and Road Initiative, in which the UAE plays a pivotal role. He referred to the 2018 UAE and China Joint Declaration, which resulted in the establishment of a comprehensive strategic partnership between the two countries.

The leaders of both nations are keen to promote bilateral relations, he affirmed, citing the visit of His Highness Sheikh Mohamed bin Zayed Al Nahyan, Crown Prince of Abu Dhabi and Deputy Supreme Commander of the UAE Armed Forces, to China in July 2017.

Heping also highlighted the joint projects between the two countries, as well as opportunities to enhance bilateral cooperation, pointing out nearly 300,000 Chinese expatriates are living and working in the UAE, while more than one million Chinese tourists visit the UAE each year.

The lecturer highlighted the most important CPC achievements in the past 70 years, the first of which has been to enhance the country’s economic power. China became the second-largest economy in the world in 2010, and its GDP increased from US$27.6 billion in 1952 to $13.6 trillion in 2018.

Secondly, he added, the CPC ensured the diversification of the economic structure and as a result, China now leads the world in manufacturing 220 types of industrial products. Thirdly, the CPC boosted the country’s creative capacity and China spends $290 billion on scientific research and development. (Source: WAM)