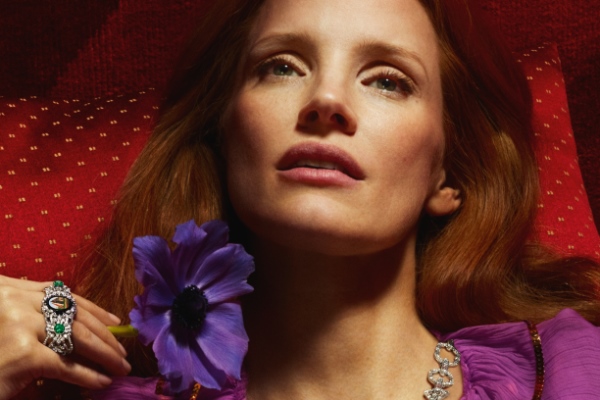 Gucci presents the third act of Hortus Deliciarum, the High Jewelry collection designed by Creative Director Alessandro Michele. Composed of unique pieces divided into five themes, this new encounter with the world of jewelry gathers together the passions and obsessions of an imaginary Grand Tour. Starting in the mid-nineteenth century and continuing to the 1970s, this fantastical journey is suspended in time and space as it creates a ‘memory of memories’.

The resulting jewelry embodies an ethical, aesthetic value by bringing together different cultures and restoring the splendor of rarities existing side by side. The pieces are products of experience and a kind of travel that distills, bringing together the past and the varying forms of the present and provoking clashes and encounters to build a multi-faceted future.

This creative tension brings forth a High Jewelry collection whose value is intrinsic both within the imaginative process and to the material from which the evocative power of its story has developed.

In the role of an obsessive collector, Alessandro Michele starts with the historicized experience of the Grand Tour of the nineteenth century. Then, as a mythographer, he writes an allegory made of precious souvenirs, collecting dreams and experiences, telling stories and secrets. Finally, he creates unique pieces of jewelry that are reminders of an expression of both the virtuosity of craftsmanship and the capacity for creativity. On this path of dreamlike, imaginary journeys, we move from the magnetic attraction of the infinitely small micro-mosaics of ruins and Roman landscapes to precious stones, colorful and uneven, as an expression of the diverse miracle of creation. With the same ‘curiosity for knowledge’, we move with eloquent lightness from the extraordinary obsession that creates the quality of historicity within the miniatures to the colors of emerald, aquamarine, rubellite, spinel, morganite and amethyst. And thus, a fairy-tale world is formed, in which the Creative Director immerses himself in the will of a traveler who wants to know and study the world taking shape before his eyes. It is a creative method that allows Alessandro Michele to recreate the splendor of a real journey, documented and chronicled in the expression of the Grand Tour, and an imaginary personal journey, dreamed and recounted by himself.

This is why this third collection of Gucci Hortus Deliciarum presents itself as five enlightened and enlightening chapters of a travel diary. Through the materialization of ‘souvenirs in the form of jewelry’, the handwritten pages become a map of memories. And, perhaps, there are so many memories in it that they become each other’s collaborators, celebrating together a vision of an extraordinary path through a precious world composed of mythical continents and fantastical themes.

The first theme develops the idea of the Grand Tour, a journey of indefinite duration that, from the eighteenth century onwards, European aristocrats and intellectuals undertook through continental Europe, with the key destination, initial or final, being Italy. This journey, which became a rite of passage for the European youth of the eighteenth century, is the emblem of the idea that travel starts as the sublimation of escape but becomes an opportunity for learning and knowledge. The journey often encompassed the entire storyof Europe, but Rome was the ultimate destination for every experience. As it was for Johann Wolfgang von Goethe in his literary jewel, Italian Journey, Rome was the pinnacle of this ‘Erasmus year’-equivalent. It is also the starting point of this third Gucci High Jewelry collection. A set of unique micro-mosaic pieces, made between 1850 and 1870, bring to this collection the precious nature of the product and the historicity of the typical Roman landscapes they show. The set depicts the Colosseum, Piazza San Pietro with the Bernini colonnades, the Pantheon as it was in the nineteenth century, the Roman Forum, the Temple of Vesta, the Temple of Hercules at Cori, the waterfalls at Tivoli and the Pyramid of Cestius. Through these cameos, Alessandro Michele captures a wonder and desire longing for ancient splendor. He then embeds them in necklaces, bracelets, earrings, brooches, gold pendants holding sparkling peridot, yellow beryl, red and pink spinel, blue topaz, fire opal, pink tourmaline and colorful diamonds. 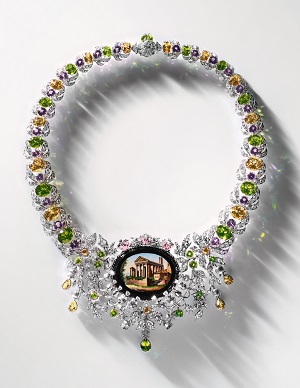 The second theme of the collection takes up this concept of kaleidoscopic beauty. Held in the pages of the imaginary travelogue, which started in Rome and then journeys as far as the India of the Maharajah, between the magnificence of the eclectic architecture of the royal palaces and lush nature of the gardens, the colored silks of Mogul attire and the Hieratic atmosphere of the Vedic gods. This is where the eye of the traveler is captivated by the ‘red stones of light’: rubellite, imperial topaz, yellow beryl, tourmaline and garnet; stones possessing the magical, hypnotic quality of twilight in significant dimensions. This metaphysical moment is frozen in time by Michele’s evocative storytelling, which comes to life in the form of solitaire rings with pear- or heart-cut stones, multi-strand necklaces of multicolored stones, bracelets that capture between the woven strands of gold, diamonds and enamel, large stones of yellow beryl, collier and sautoir, earrings and rings that recreate the shapes of the rosettes of European cathedrals. 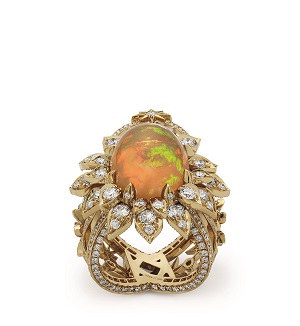 With its mythological origins and symbolism, the pearl is the foundation of the third theme of this Gucci High Jewelry collection. Through it, Creative Director Alessandro Michele conveys all the evocative meaning behind his working method for Gucci. As the Greek myths impart, the pearl is born from the foam of the sea and solidified on Aphrodite’s skin. ‘The first among precious things’, according to Pliny the Elder, a pearl was also the most magical gift that Caesar gave to Cleopatra. With this great symbolism of femininity and mystery, the pearl guides the traveler to the point where East meets West. Around Indonesia, Australia and Polynesia, where the pearl, a natural beauty possessing unsolved mysteries, combines Eastern and Western traditions with a myriad of historical references and equally numerous depictions. The drops of the ocean on Aphrodite’s body can still be seen in Botticelli’s Birth of Venus and the necklaces seen in portraits of Elizabeth I of England. White, cream and black pearls are combined with imperial topaz to create sautoirs paired with earrings and brooches, while holding detachable pendants in imperial topaz or alternating with multicolor tourmalines and diamonds.

In the diary of this imaginary journey, we arrive at the pages dedicated to the New World. It is the 1930s and 1940s, Modernism abounds, and skyscrapers soar into the sky. Creative Director Alessandro Michele illustrates the change of pace by creating necklaces and bracelets with geometric shapes in chains with asymmetrical, flexible modules with meticulous structural details, which he ‘corrupts’ with grandiose stones that add real drama. Flexible chains are adorned with amethyst, aquamarine and cushion-cut blue-grey beryl, which replicate their splendor in earrings or central pendants set in cages of baguette-cut diamonds. Innovative creations that do not try to escape the assault on the senses while the worlds mix and mingle and give life to unique objects.

The drama of the final pages of this long travel diary reaches the 1970s: pop culture, free self-expression, the desire to discover foreign worlds and an attitude that idolizes remote, mystical worlds. The pages conclude the journey by recalling the beginning: they referenceand amplify it, using memories and transforming the jewelry into amulets that protect ideas, visions, and stories. Psychedelic colors for necklaces of white gold chains, diamonds holding real talismans in hexagonal emerald, pear-shaped green tourmaline, and aquamarine set in a green enamel frame enclosing baguette-cut diamonds. A pendant with a yellow gold base recalls a scene in the savannah, engraved and enameled. It brings the journey back to the time and place where it all began: the magnetic enchantment of a world that you can always keep by your side, reproduced in miniature. Much like the micro- mosaics of the Grand Tour, this pendant, too, has its own story. The Savannah design comes from the 1969 ‘Savana’ foulard Vittorio Accornero De Testa designed for Gucci. In 1981, this design was transferred to a pendant, which today closes the final chapter of the long journey that is the third collection of Gucci’s High Jewelry, Hortus Deliciarum.