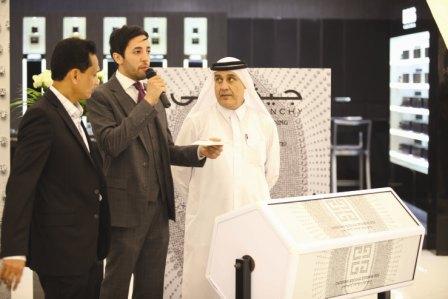 Galvanni, the renowned Italian fashion brand with polo heritage established since 1973, which manufactures apparel, shoes and accessories for men and women has made its Gulf debut by opening the first shop at following a franchisee agreement between the international company and H2 Fashion L.L.C, the leading fashion retail group based in .

Hany Abu Omar, Managing Director, H2 Fashion L.L.C. said: “We are delighted to represent this world class fashion brand in the UAE, and . This is the first shop we have opened in and have plans to open an additional six more stores in the Gulf before end of 2014. Galvanni will trigger a huge demand by customers in the UAE due to the fact that represents an equestrian hub for the region will generate more demand to the polo fashion brand.”

is a leading shopping and lifestyle destination in the heart of one of ’s most dynamic lifestyle communities, and of the world’s most ambitious waterfront developments - the Dubai Marina.

Givenchy announces the winner of the ‘Givenchy Bridal Honeymoon’ survey

At an event hosted by Paris Gallery, the leading luxury retailer in the region, announced the winner of the ‘Givenchy Bridal Honeymoon’ survey draw at the Paris Gallery Dubai Mall luxury store. The prize was a roundtrip ticket for two to any of the three major honeymoon destinations in the world: , or . It was won by Mr.  Jamal Sulaiman Ahmed Antal of Fujairah, who chose .

The special guest who graced the occasion was the Givenchy makeup artist for the Middle East, Mr. Joseph Dosh, who has trained in and worked with stars. He represented Givenchy’s professional presence in makeup and skincare, and was available for an interactive session where the audience had a chance to pose their questions and get his professional advice. He also did a live make-up session on a model highlighting the Givenchy Arabic Bridal make-up look for the season.

Givenchy launched a survey in association with Paris Gallery among its customers in July. It was conducted during a special Givenchy season of surprise gifts and offers where every purchase of a Givenchy product received an instant gift. In addition every Givenchy customer was given an opportunity to win a trip to their honeymoon destination by taking part in the survey and answering four questions.

Officine Panerai pays tribute to with two new Special Edition watches, sold exclusively at the Panerai boutique in The Dubai Mall, the world’s largest shopping and entertainment destination. Both the watches are personalised with the same engraving on the case back, showing Burj Khalifa, Dubai’s iconic architectural jewel developed by Emaar Properties PJSC, and the world’s tallest building.

The first Special Edition dedicated to Dubai (PAM00453), of which 75 units have been made, is a Luminor Marina – 44 mm with a case in polished steel and the bridge protecting the crown in brushed steel. The movement is the hand-wound calibre OP II. The second Special Edition (PAM00486), of which only 10 units have been made, is a Radiomir 10 Days GMT – 47 mm, with the elegant cushion case in polished steel. It is powered by the automatic calibre P.2003, created entirely within the Officine Panerai manufacture at Neuchâtel. The two watches are part of a series of Special Editions created by Officine Panerai for the clients of some of the Panerai boutiques throughout the world.