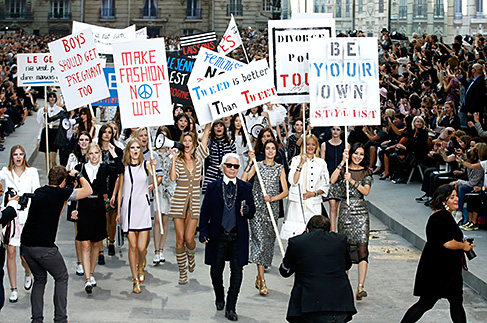 Just when critics wondered how Karl Lagerfeld could ever possibly top last season’s Chanel supermarket extravaganza, he did the unexpected. Even as show goers walked into the Grand  Palais this season, they found a more subdued Paris cityscape through which models casually walked as if strolling in their urban milieu. For the now-infamous finale, they came out carrying megaphones and feminist picket signs (“History Is Her Story”; “We Can Match the Macho”). And it was a riot of colour and cut that Lagerfeld pulled off with aplomb.

The Undercover designer Jun Takahashi always manages to innovate. Though the show at first appeared to be a romantic nod to “Swan Lake,” what came next were colorful anoraks and purses with glowing screens depicting animations. The secret to it was simple. iPads into peekaboo pockets, (yet another trick of Takahashi’s).

It was a ‘Return to Nature’ theme at Dries Van Noten’s show with models walking ever so casually on a delightful patchwork carpet that looked like moss (created by the artist Alexandra Kehayoglou) accompanied by the sounds of nature such as the happy chirping of birds. Ahh! What bliss! The audience had to just about control themselves from stepping on to this magical universe before their eye. Then ever so slowly, soothing music was introduced: the delicate soundscapes of the Belgian band Oscar and the Wolf, leaving everyone so destressed and rejuvenated, that the largely pastel-hued stylish creations proved to be the toast of the week.

Several industry milestones made this season unforgettable. One was Lanvin’s 125th anniversary which the house celebrated with legendary models like Amber Valletta and Kirsten Owen, on its runway. And the other was the end of an era in fashion’s long reign – Jean Paul Gaultier’s last prêt-a-porter collection with yet another novel theme, a splendid tribute to the great editors of his time like Suzy Menkes, Grace Coddington and Carine Roitfeld. It was indeed a fitting celebration of the talented designer’s 38-year run.

A change of batons

There was a change of batons as two new designers took over the reins of well known labels reviving them with a fresh burst of creativity - Jonathan Anderson at Loewe, and Julie de Libran at Sonia Rykiel. That’s fashion for you. We just can’t have enough of it.