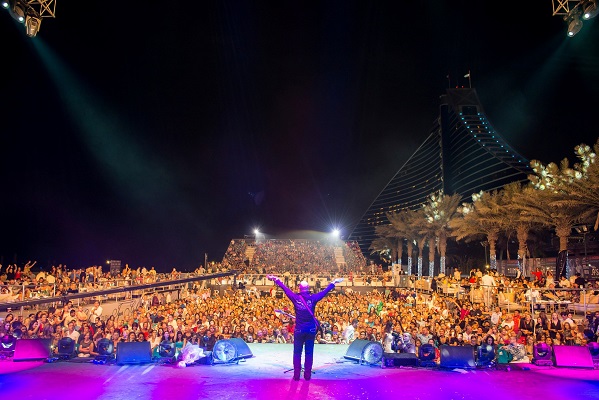 For the first time in the history of Dubai, "PaRUS – International Music Fest 2017" gathered on a single stage a record number of stars from Russia and other CIS countries. Denis Maidanov, Vladimir Presnyakov, Nikolai Baskov, Svetlana Loboda, Natasha Koroleva, Zara, Denis Klyaver, Taisiya Povaliy, Maxim, Anna Semenovich and Rodriguez are just a few among many A-class performers who took the stage at the festival.

Russian Media Group organized "PaRUS – International Music Fest 2017" with the support of Radio Chanson and its owner Mikhail Gutseriev, Russian Radio and M Premiere, the latter under the direction of Evgeniy Morozov, who is established in the United Arab Emirates and has presented the Russian Seasons in Dubai since many years with astounding success.

The organization of the "PaRUS 2017" festival delighted even the most fervent of spectators, as one of the criteria for its success lies in its location, taking into account the fact that the main three concerts took place over a period of three days in November, right on the shore of the Arabian Gulf in the five-star hotel complex Jumeirah Beach Hotel. The outdoor stage was located just opposite the iconic Burj Al Arab, the only 7-star hotel in the world, made in the form of a sail. This is one of the most luxurious landmark in Dubai, which Russian-speaking people call affectionately "Parus" (Sail) in everyday life.

A specially developed model of the stage and seating areas consisted of various categories of spectator places with an excellent overview of the scene. Such an arrangement allowed all viewers to enjoy the chic panoramas and see the performance from all seats.

The sea of light, waves of kilowatts of sound and power coming from the stage from the participants of the concerts, required special energy. People who came to the concert did not fully believe that the event will bring so many famous and beloved artists who appeared on stage one after another - all in one evening.

Over five thousand people visited “PaRUS 2017” for three days. The festival gathered not only the Russian-speaking Diaspora of the UAE, but also numerous tourists and invited VIP guests from Russia and other countries. As guests of honor of the festival there were many representatives of the diplomatic corps: ambassadors and consuls from different countries, businessmen, artists and others. The event was attended by the crew of the musical TV channel MuzTV, as well as a large group of journalists from leading Russian and local media.

The festival "PaRUS 2017" was opened with the anniversary concert of the "A-Studio" group, in honor of the 30th anniversary of the band. The first day of the festival ended with after-party performance of Leonid Agutin. From the first chord, Agutin simply swept off everyone present to the dance floor.

On the second day a tremendous gala concert took place, during which the brightest stars of the "Russian Radio" and the radio "Chanson" excelled. There was not enough free space on the court, the house was full.

The third day of the festival was held under the slogan of beauty and sensuality, thanks to one of the most charming and charismatic singers of our time who was shining on stage - Svetlana Loboda performed with her solo program and did not leave any spectator indifferent.