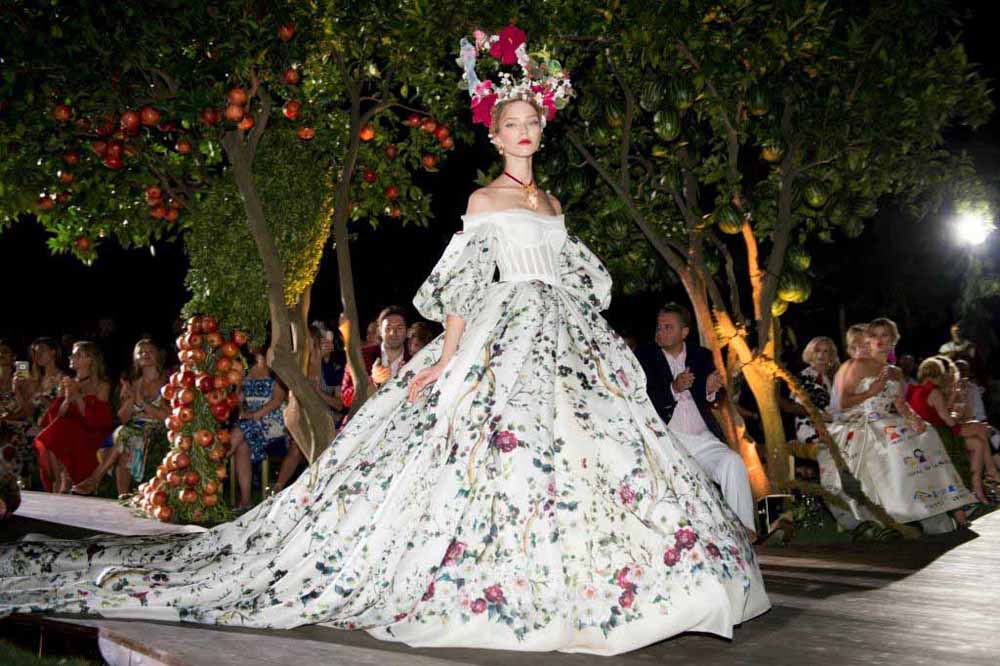 It was also a show that took the audience back in time to world of ball gowns and intricate head pieces a la the aristocrats of the hoary past. But with the just a touch of modernity it managed to strike balance between nostalgia and the need of the mind to go back to childhood and linger there fondly.

The brand’s 400 elite clientele were invited for a four-day getaway, to Portofino, now the exclusive haunt of high end designers but which was once upon a time a fishermen’s village. The design-duo own neighbouring villas in the area which overlooks the water, which can be spotted through pine trees and olive groves.

The weekend event unfurled fashion shows, dinners, festivities et al and culminated in a grand finale of a dance party where the dress code was (you guessed it) gold.

This year’s Alta Moda’s inspiration was the 1999 version of ‘A Midsummer Night’s Dream’ filmed in Italy and starring Michelle Pfeiffer. But it was set in an Italian countryside and was populated by characters drawn from Greek mythology (even as Greece’s economy crumbled in the day’s headlines) but who were a combination of Homer, Dante and Shakespeare. But that’s artistic license for you.

The clever duo had also transformed an art gallery in the village into a pop-up store selling their ready-to-wear and as you can expect business there was bustling.

As Portofino covers less than a square mile, most of the guests had put up in hotels in the mainland and were transported from there by luxury speedboats to a dock and then up a flight of steps lined with hurricane lamps to Gabbana’s property set on the hillside.

It was in this fascinating setting that ninety-four models with crimson lips and ballerina hair flaunted the fabulous, out-of-the-world gowns, dresses and trouser suits. But with each of them having to showcase just one outfit there were no rushed changes to be made into other outfits.

Understandably, competition for the dresses is so stiff that orders are placed even before the show is over. One elaborately done silk ball gown invoked an enchanted wood, featuring images of plants and animals, while another had a skirt fashioned from peacock feathers and one other was decked with printed images of pumpkins and flowers, while yet another gown teamed a one- shoulder, busty, golden top with a metallic black and silver skirt that ballooned out in royal splendor. Rambling across a vast pink tulle ball gown were painstakingly embroidered, minute tapestry stitches depicting strawberries, lemons and briar roses.

Vision, detailed craftsmanship and fantastic proportions paid court to haute couture’s grandeur. And Domenico Dolce put it all perfectly when he said, “We do this from love and for love of couture”.