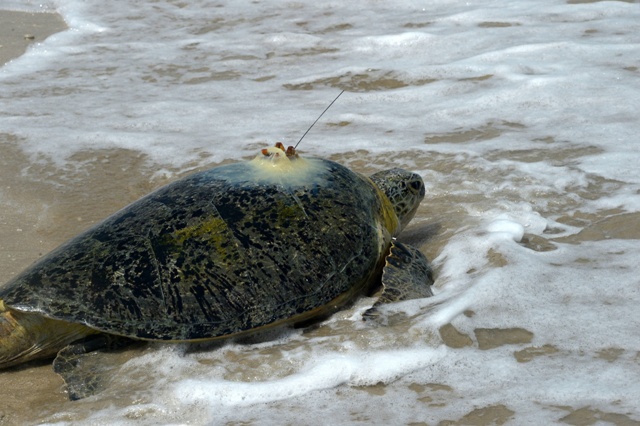 Emirates Wildlife Society in association with WWF (EWS-WWF), is reaffirming how critical public-private partnerships are to protecting the Gulf’s marine species and habitats, as it renews commitment from key UAE and Oman-partners for the Gulf Green Turtle Conservation initiative. The latter was launched in May 2016 and has already made rapid headway, after 24 green turtles were tagged off the beaches in UAE and Oman. As the initiative aims to conserve endangered marine species and critical habitats in the UAE and wider region, EWS-WWF is urging businesses and governments alike to take action, and fund the initiative as milestones continue to be marked across the region.

In its first year alone, the scientific research initiative has brought together eight partners who share the same vision of safeguarding the marine environment of the Arabian Gulf and the surrounding sea. These include: UAE Ministry of Climate Change and Environment (MoCCAE), the Oman Ministry of Environment and Climate Affairs (MECA), Environment Agency – Abu Dhabi (EAD), the Environment Protection and Development Authority in Ras Al Khaimah (EPDA) in the UAE, Environment and Protected Areas Authority in Sharjah (EPAA), Environment Society of Oman (ESO), Five Oceans Environmental Services and the Marine Research Foundation.

Commenting on the significance of this project for the UAE, HE Eng. Mariam Mohammed Saeed Hareb, Assistant Undersecretary of Environmental Affairs and Nature Conservation Sector at the Ministry of Climate Change and Environment (MoCCAE) stated: “The conservation of the UAE’s ecosystems is pivotal in our quest to preserve our natural and cultural heritage. The importance of the Gulf Green Turtle Conservation initiative is multi-fold and will enable us to build bridges to further strengthen our national and regional efforts to address the conservation of this key species in the UAE, the project plays a role in achieving the goals of our National Biodiversity Strategy and Action Plan concerning the conservation of the most threatened species.”

Highlighting the positive impact that fundraising has on marine conservation, Marina Antonopoulou, Marine Programme Leader at EWS-WWF said: “Marine turtles fulfil important roles in marine ecosystems. Seagrasses - on which green turtles feed - also happen to be amongst the most productive ecosystems on the planet, providing a nursery for many species of invertebrates and fish. It is therefore essential to safeguard this flagship species and the habitats they and many other marine species rely on. The partnerships we hold today in the UAE and Oman are critical as we drive the course of conservation together; however, more support and funding are needed as we look to strengthen efforts on marine turtle conservation in the region. We are looking forward to welcoming new partners and sponsors, eager to make a positive impact on our marine environment and protect livelihoods.”

Since the initiative was launched in May 2016, marine experts have gathered scientific data on green turtle migration and feeding patterns, and are in the process of identifying critical marine habitats. Working with its partners, experts at EWS-WWF have managed to locate and tag 24 green turtles with satellite transmitters in the waters around Bu Tinah Island, Ras Al Khaimah, as well as Ras Al Hadd and Ras Al Jinz - two very important nesting areas in Oman. The successful tagging of these creatures has enabled them to record observations such as:

Post-nesting female turtles in Oman starting to show interesting movement patterns across the region. One particular female has travelled fast in a northward direction feeding offshore of the Fujairah coast. This highlights important ecological connectivity for green turtles between the two geographic areas (Sea of Oman and the Arabian Sea).

With additional funding from businesses and governments, experts aim to provide a comprehensive analysis of the ecology needs of green turtles through a regional approach, and enable the identification of the marine habitats critical to their survival by 2020. It’s also clear that the ocean itself is a major contributor to the global economy, but its asset base is being rapidly eroded.  The initiative will provide science-based information to governments and policymakers that will prove essential when making informed decisions to protect green turtles and their habitats.  In supporting this work, partners have become part of the solutions to ensure the UAE and region’s development continues to grow, yet with a minimal impact on the marine environment.

Another main partner of this project, the Oman Ministry of Environment and Climate Affairs (MECA) has reinforced its commitment to conserving endangered marine species and critical habitats in the region. Dr. Thuraya Al Sariri, Assistant Director General of Nature Conservation at MECA said: “Through our collaboration with EWS-WWF on the Gulf Green Turtle Conservation initiative, we aim to gather information around post-nesting migrations of the females nesting in Ras Al Hadd and Ras Al Jinz – which hold some of the biggest nesting populations of Gulf green turtles in the region. This will help us map out the different feeding and nesting locations, and take the necessary steps to help protect them.”

H.E Hanna Saif Al Suwaidi, Chairperson at the Environment and Protected Areas Authority, Sharjah (EPAA) said: “Our involvement in the EWS-WWF Marine Turtle Conservation project (2010-2014) had significant outcomes for us. As part of our renewed commitment to the preservation of this species, we’re focusing efforts on nest protection in Sir Bu Nair Island – which like Bu Tinah, is part of the Network of Sites of Importance for Marine Turtles in the Indian Ocean – South-East Asia Region. The Gulf Green Turtle Conservation initiative will help us identify Important Turtle Areas (ITA) for Gulf green turtles, boost efforts to protect their nesting areas and also extend them to include foraging habitats important for marine turtles at all parts of their life stages.”

Dr. Saif Al Ghais Executive Director at Environment Protection and Development Authority (EPDA) added: “Our marine habitats are an important component of Ras Al Khaimah’s natural heritage. We are optimistic that our partnership with EWS-WWF will enhance our knowledge around green turtles in Ras Al Khaimah and their associated marine habitats, such as seagrass meadows. This information is important for our efforts to protect marine biodiversity. We also see this as an opportunity to raise the profile of Ras Al Khaimah as an eco-tourism destination.”

Environment Agency – Abu Dhabi (EAD), is hopeful that this initiative will fill information gaps that will be key to marine planning and protection of marine turtles. Dr. Shaikha Salem Al Dhaheri, Executive Director - Terrestrial and Marine Biodiversity Sector at EAD said: “The tagging of turtles in the marine protected area of Bu Tinah was a significant milestone for us. We have questions that need answers, such as which nesting populations do the turtles feeding in Abu Dhabi Waters belong to? What are their behaviour patterns? Once the studies are analysed, we can use the research to further drive turtle conservation within and outside protected areas in Abu Dhabi, and enhance the protection of Bu Tinah Island – part of the Network of Sites of Importance for Marine Turtles in the Indian Ocean – South-East Asia Region.”

The Gulf Green Turtle Conservation initiative is a continuation of EWS-WWF’s efforts to protect the Gulf’s marine environment. It follows the success of the previous 4-year Marine Turtle Conservation Project that tracked 75 female hawksbill turtles nesting in the UAE, Qatar, Oman, and Iran. The 2010-2014 project helped identify the ITAs in need of conservation action.