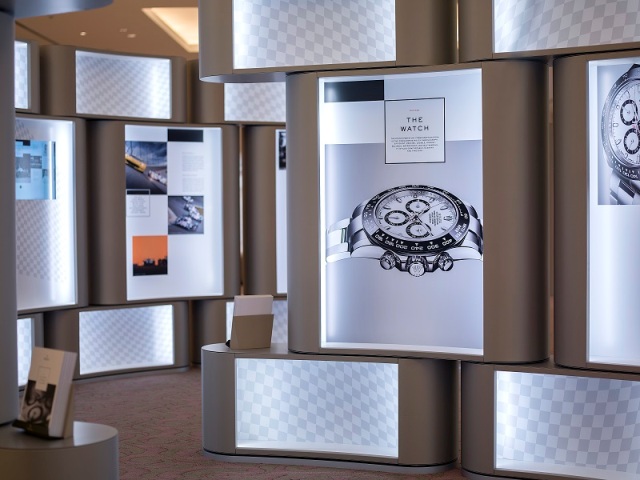 Mohammed Rasool Khoory & Sons Group and Rolex invite you to discover the story behind a legendary watch, the Oyster Perpetual Cosmograph Daytona, in a unique exhibition dedicated to the passion for speed and motor sport that inspired the iconic chronograph.

The Rolex Daytona exhibition will be on display for the first time in Abu Dhabi exclusively at the Yas Mall from 20 November to 5 December 2016.

Through a series of panels and interactive displays the exhibition retraces the ori­gins and evolution of the Cosmograph Daytona, an evocative watch named after the capital of speed in Florida (USA) and prized by the world’s fastest racing dri­vers and enthusiasts alike. Visitors will also be able to admire the new Cosmograph Daytona in 904L steel fitted with a monobloc Cerachrom bezel in black ceramic, combining the technical excellence and performance that distinguish Rolex with characteristic aesthetics inspired by the model’s unique heritage.

A PLACE, A WATCH, A LEGEND

Created in 1963, the Cosmograph Daytona was born for racing and soon esta­blished an extraordinary track record in the world of motor sport thanks to its reliability and performance. Known simply as the “Daytona”, the watch has risen to the rank of an icon, as one of the best known and most coveted chronographs in the world.

Daytona is an evocative name which, before it became inextricably linked to one of Rolex’s most emblematic models, had forged its own legend; one built on land speed records, ultra-powerful engines, races on hard-packed sand and daring 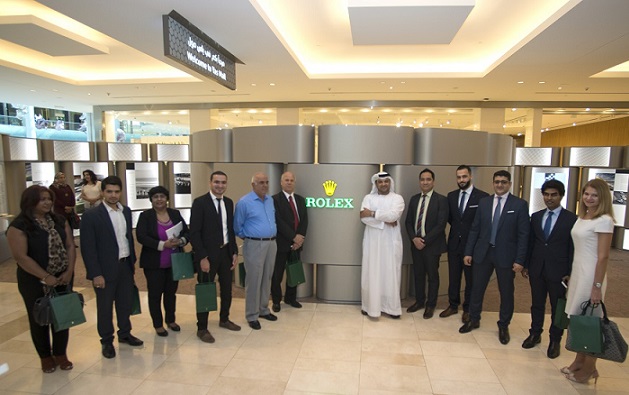 It all began on the beach at Daytona Beach, Florida in the early the 20th century.

This broad band of hard-packed sand – a straight, flat stretch more than 35 kilo-meters (22 miles) long – became one of the legendary sites in the conquest of speed and the advent of motor racing. Between 1903 and 1935, 14 world land speed records were set there. Daytona Beach’s natural raceway was exceptional.

It attracted automobile pioneers from the four corners of the United States and from Europe, who came to compete at the wheel of the most powerful cars of their time.

Motor sport exploits that resounded around the globe swiftly secured Daytona Beach’s reputation as the “world capital of speed”. In March 1935, the record breaking culminated in the fastest speed ever set on the beach at Daytona, by the daring British driver, Sir Malcolm Campbell, in his famous speedster Bluebird: he clocked 445 km/h (276 mph), just a few months before he broke the 300 mph barrier and set a new World Land Speed Record at Bonneville Salt Flats in Utah. The man who would go down in history as the “king of speed” had been wearing a Rolex Oyster since the early 1930s. 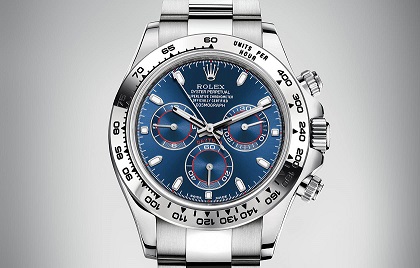 The motor racing tradition persisted on the beach until the late 1950s. It then conti­nued on the purpose-built Daytona International Speedway, opened in 1959 as one of the first Super Speedways in the world. Every year, this gigantic amphitheater, 4 kilometers in circumference, with 31-degree banked turns which allow brea­thtaking acceleration, hosts automobile races as thrilling and prestigious as the Daytona 500 and the Rolex 24 At Daytona®. The most experienced racing drivers rate the latter, 24-hour, endurance race – the American equivalent of the 24 Hours of Le Mans – as one of the most difficult in the world.

Daytona International Speedway inherited a formidable history and gave its name to the chronograph Rolex created in 1963: the Cosmograph Daytona. It was a highly innovative chronograph at the time, with excellent legibility of its functions thanks to highly contrasting counters and its tachymetric scale, which was no lon­ger on the dial but positioned on the bezel. Its sporty appearance was the result of functional considerations intended to respond to the wearer’s needs and to make the watch the best instrument for measuring time and speed on the racing track.

THE LEGEND LIVES ON

For half a century, the Cosmograph Daytona has created its own legend. By the mid-1960s, it had become the winner’s trophy at the 24 Hours of Daytona, a race inaugurated in 1962 and renamed Rolex 24 At Daytona® in 1992. Today, the Rolex Daytona chronograph is still regarded as the highest honor for many of the world’s best endurance racing drivers who compete there each January.

“It’s all about the watch”, said driver Scott Pruett a few days before he and his team triumphed in the 2013 edition – his fifth victory. Today this leading endurance race, which begins the automobile sports season in the United States, is com­monly known by the name of its prestigious trophy: “The Rolex”.

The Cosmograph Daytona is also the Official Timepiece of the 24 Hours of Le Mans and the chronograph worn by Rolex Testimonee Tom Kristensen, the only racing driver to have won the prestigious French endurance race nine times. In 2013, Rolex again reinforced its ties with motor sport by becoming one of the principal partners of Formula 1®, a commitment that underscores the very same passion for performance, innovation, precision and excellence.

Like all legends, the worldwide success of the Cosmograph Daytona has retained its share of mystery. The Rolex chronograph’s appeal accelerated after a new, entirely redesigned and self-winding model was introduced in 1988, and it has remained undiminished ever since. In 2000, Rolex equipped the watch with a new high-performance, self-winding movement entirely designed and manufactured in-house. Emblematic of Rolex’s watchmaking know-how and technological ex­pertise, the innovations in this movement set new standards for chronographs in terms robustness, reliability, and precision. More than 50 years after its creation, the Cosmograph Daytona continues to evolve. Rolex has never changed its approach: striving to design and manufacture a chronograph that best responds to the brand’s quest for perfection. Beyond that, legends tend to escape their creators and live on.

Mohammed Rasool Khoory & Sons Group are one of the leading companies esta­blished over the last 55 years ago having different business operations. Top of this business chain is the luxury watches, jewelry and fashion accessories.

Its real estate division Mohammed Rasool Khoory Real Estate has successfully im­plemented many landmark projects in Abu Dhabi. It owns many properties around UAE as a part of capital investment. Mohammed Rasool Khoory Foodstuff has a long history of foodstuff business supplying large range of food items to govern­ment authorities and palaces.

Rolex, the leading brand of the Swiss watch industry, is headquartered in Geneva and enjoys an unrivalled reputation for quality and expertise the world over. Its Oyster watches, all certified as Superlative Chronometers for their precision, per­formance and reliability, are symbols of excellence, elegance and prestige.

Founded by Hans Wilsdorf in 1905, the brand pioneered the development of the wristwatch and is at the origin of numerous major watchmaking innovations, such as the Oyster, the first waterproof wristwatch, launched in 1926, and the perpetual rotor self-winding mechanism invented in 1931. Rolex has registered over 400 pa­tents in the course of its history. A truly integrated and independent manufacturing company, Rolex designs, develops and produces all the essential components of its watches in-house, from the casting of the gold alloys to the machining, craf­ting, assembly and finishing of the movement, case, dial and bracelet. Rolex is also actively involved in supporting the arts, sports, exploration, the spirit of enterprise, and the environment through a broad palette of sponsoring activities as well as philanthropic programs.