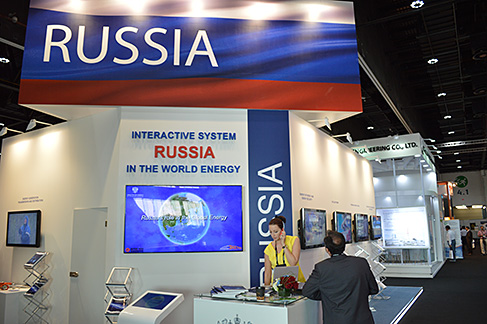 The 12th annual POWER-GEN Middle East conference was held 12-14 October 2014 at the Abu Dhabi National Exhibition Centre (ADNEC) with a special event ‘Russia Day’ held as part of the event. it was attended by a high-level Russian energy ministry delegation led by Russia’s deputy energy minister, Yury Sentyurin. During his speech on Russia Day the director of the International Renewable Energy Council (IRENA) Adnan Amin said that Russia has key role to play in renewable energy.

A high-level Russian energy ministry delegation met UAE officials to push for deals with the UAE, including oil concessions for Rosneft, and gas supply deals from Gazprom, the country’s two leading energy companies. Russia’s deputy energy minister, Yury Sentyurin stressed the importance of international collaboration on energy projects saying that “the global power markets are becoming more dynamic yet less predictable” and that the “silver bullet” to secure energy supplies for countries around the world was “politically unbiased co-operation”.

He said he saw good prospects for regional gas supply deals: “Gazprom has opportunities to supply [liquefied natural gas] into the UAE because of the shortage of natural gas in this country. Gazprom, [through its international marketing division] has put forward such kind of proposals for every country in this region … and we’ve got some opportunities.”

Mr Sentyurin also said Russia is pushing for oil deals in the UAE. “Rosneft is in the process of talks with its partners here. No results yet, but they have signed a memorandum of understanding  in St Petersburg for further cooperation and Rosneft is going to open a representative office here”.

Rosneft is among the dozen or so companies bidding for production agreements to replace the old oil extraction agreements that were in place since 1939 and which expired last January. The Supreme Petroleum Council of Abu Dhabi has yet to decide on which companies will operate the new concessions which previously were dominated by Exxon, Shell, BP and Total.

During his keynote address later at Russia Day, a special event being held at part of POWER-GEN Middle East, Mr Sentyurin said that renewables were going to play a key role in the Russian Federation’s future energy mix and that a target had been set of having 6 GW of renewables online by 2020, which would account for 4 per cent of the Russian Federation’s energy mix.

“We are doing our utmost to be in line with global trends and develop these lines of generation”, he said.

The director of the International Renewable Energy Council (IRENA) Adnan Amin said during his speech on Russia Day that “Russia can play a very important role in the renewables story” and that the Federation has “vast potential” to embrace clean technologies.

Russia plans to derive 4 per cent of its power from renewables by 2020, which Amin said was “a viable target”. He added that if Russia – which has applied to join the International Renewable Energy Council – hit this target, it would displace six million tonnes of CO2 a year. He said financing of renewable projects was getting cheaper because the perceived risks associated with ‘green’ technologies were dropping.

Russia has been making a strategic push into the Middle East and Asia, with energy at the forefront, particularly since it faces sanctions from the US and European Union over its confrontation and land dispute with Ukraine. Europe is Russia’s most important trading partner, accounting for the bulk of its energy sales – particularly natural gas – and it is the source of most of its imports.

But the Middle East and Asia represent big market opportunities for Russia as the world’s fastest growing regions, and even faster-growing energy consumers. In the UAE, for example, GDP growth has been running at 4.8 per cent but domestic energy demand is growing at above 9 per cent. Most power generation in the UAE is currently from natural gas.

Last month, Russia announced the completion of a pipeline deal with China that had been long under negotiation whereby it will supply massive amounts of gas for China’s rapid growth and switch from coal to natural gas. That pits Russia as a competitor with some of the Middle East’s big natural gas suppliers – particularly Qatar but also the UAE and others who are ramping up LNG capabilities.

However, Mr Sentyurin said he expected that the pace of economic growth in both Asia and the Middle East would temper that competition. “It is a competition, of course, but we are not afraid of such competition,” he said. “Asia- Pacific region has most rapid dynamics of development and will go on for decades. We think demand for energy sources, including LNG, and [pipeline] natural gas will increase. We think it wouldn’t be severe competition.”

The other main area of energy trade between Russia and the UAE is in nuclear energy, with the UAE set to start the first of its four reactors in 2017. It already has in place a deal with a unit of Rosatom, Russia’s nuclear company, which will supply about half of the required enriched uranium commencing just before commissioning of the first reactor, according to Umarpasha Khanaliev, Rosatom’s director of strategic initiatives.

The two countries have a growing trade relationship, with total volume of trade in 2012 at US$1.5 billion, and non-oil trade soaring by 7.5 per cent in 2013 to $897 million. Earlier this year, the Abu Dhabi Government signed a letter of intent to invest $5bn in Russian infrastructure projects. Meanwhile, Mubadala Fund and the Russian Direct Investment Fund established a joint venture investment vehicle for $2bn.

POWER-GEN Middle East provides up-to-date information about the latest technological developments in the power industry and is critical to discussions about how GCC countries meet the estimated 6 to 10 per cent annual surge in demand for power, which is around 8 GW of additional capacity. GCC countries are projected to invest more than $300 billion in some 20 energy projects by 2020.