Russia: mindful brain forum has gathered the leading neuroscientists and contemporary  philosophers to discuss the future of neuroscience and the development of neurotechnologies. The conversation has extended the theme of the Russia Pavilion main exposition “Mechanics of Wonder” created by Simpateka Entertainment Group and dedicated to the human brain.

Moderated by famous Russian journalist Vladimir Pozner, the discussion touched those ideas that were once believed to be impossible — absolute memory, mind-controlled neural interfaces or radical intelligence enhancement. 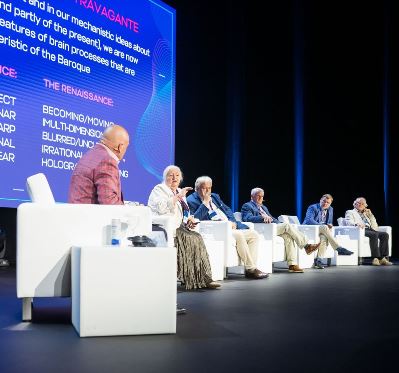 Tatiana Chernigovskaya opened the discussion: “ I believe it is time to change the paradigm in the research of the brain. Neuroscience is now starting to be in search of meaning. I personally believe that our brain is a semiotic space. What interests neuroscientists today is the difference between human brain and the brain structure of the other creatures living on our planet. One unique thing we obtained through the evolution is the creative and very complex behavior. Therefore, our current goal is not to search for the small data on the functioning of neurons, but to see the features of the brain that could be associated with a different, “baroque” view – multidimensional, moving perspective, dealing with blurred and irrational objects or subjects. To acquire this knowledge we would not only need physiology but something I would name “archeology” of mankind and its creativity. This knowledge would help us understand how musician, artist or even mathematician creates their masterpieces – the higher level of human unique abilities”.

This data needs to be the goal of the humanity neuroscience exploration. It is highly important to segregate primary and secondary consciousness.

Vladimir Pozner addresses the issue of the discoveries of the 21st century, how breakthrough in innovation greatly affects our minds and lives. Pozner states: “I am very interested in the topic of science and the human brain. The questions that are raised now are very serious. If the 20th century is known for its discovery of the atom, then, I am sure, the 21st century will be known as the century of the brain”. The more we understand how the brain processes information, the easier it is to concentrate on a single or a few situations and immediately respond to the physical world. Pozner also mentions that people are aware of various scientific, ethical and philosophical issues that we have, therefore we do our best to solve any problem or challenge. It’s always an advantage for people to know about the brain functions and mechanisms. We create endless opportunities and ideas starting from technology, innovations to our social life. The human brain is a unique masterpiece that shapes our characters, connects our thoughts and defines our future.