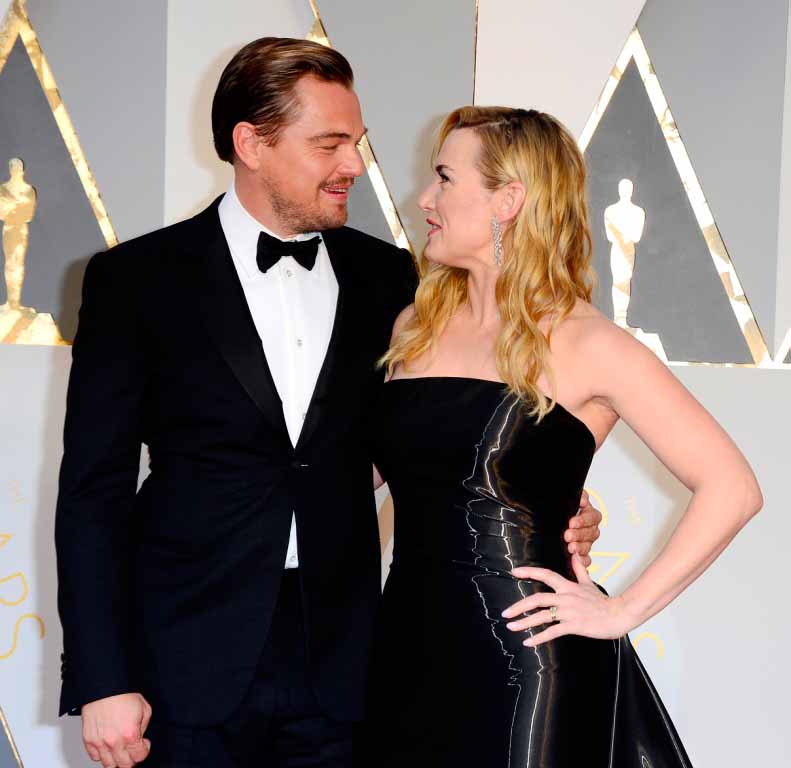 The 88th Academy Awards held at Dolby Theatre Los Angeles on 28th Feb Sunday, was an Oscar evening unlike any other. It asserted the power of the survivor as symbolized by ‘The Revenant’ and its fur trapper protagonist Hugh Glass played by Leonardo DiCaprio. We wish he had won it in a more amicable atmosphere and not with half the industry boycotting the show for being a ‘whitewashed’ affair. But that is destiny. Aviamost recalls some poignant moments at the show urging us to see the bigger picture…

In the long run, it is not who gets to the winning post that matters, as surviving itself is a winning act.

That said, almost every winner at the show, be it a film or an actor, was to reiterate this fact, be it Spotlight bagging the Best Picture, Mark Rylance as Best Supporting Actor (Bridge of Spies), Brie Larson as Best Actress (Room), Best Short Documentary for Pakistan’s Sharmeen Obaid’s Girl on the River: The Price of Forgiveness or even the Best Short Animation which went for Chile’s ‘The Bear Story’.

This year’s Oscar awards highlighted possibly every manmade problem under the sun - discrimination against race, women and the LGBT (Lesbian Gay Bisexual and Transgender) community; it recalled the infamous Holocaust and Cold War witch hunting, highlighted child sex abuse in the Church and environmental concerns.

It also proved that just being the oldest democracy or having a black President (for two whole terms not one) did not automatically ensure that deeply entrenched attitudes will change.

Topping the ‘white icing’ on the cake (like a nice brown plum) was host Chris Rock who lost no time in his barrage to berate the Academy. And did they deserve all he gave them. After all, two whole editions with no black nominees in the list, does leave a bitter after taste.

Referring to the show as the ‘White People’s Choice Awards’, Rock informed his audience that if the Academy had been given the job of nominating the host (for the show), they would probably be watching Neil Patrick Harris.

It was a blistering attack from start to finish that never lost its tempo. All we can hope is his salvos did hit home…

Gracious in defeat as well as in his moment of triumph, DiCaprio dressed in a Giorgio Armani suit and Christian Louboutin shoes received his Best Actor Oscar for The Revenant from the very charming Still Alice star, Julianne Moore adorned in a black Chanel Haute Couture SS 2016 dress and Chopard jewels. He thanked everyone he had to thank, including Tom Hardy, who plays the rival fur trader who leaves him for dead in the Canadian wilderness, thereby prompting him to seek revenge and survive impossible impossible odds.

The spectacular frontier epic being about man’s relationship with the natural world and as a keen environmental campaigner himself, DiCaprio finished his short speech by urging one and all to implement measures to prevent climate change as it was the greatest threat facing mankind. (Apart from wounded egos Leo).

American actress Brie Larson has been on a winning spree for her Best Actress performance in Room. She plays a kidnapped mother held captive and forced to raise her small son (played by the adorable talent 8-year old Jacob Tremblay) in a 10’ x 10’ room. They finally gain their freedom but meet challenges in the outside world.

Till it Happen’s to You…

The openly gay singer Sam Smith (smart in Dunhill) may have won the Oscar for Best Original Song for ‘The Writings on the Wall’ in Spectre, but it was Lady Gaga’s powerful rendition onstage of her Oscar-nominated original song ‘Till it happens to you” from the documentary The Hunting Ground surrounded by real life rape survivors that will remain in memory. She was introduced by none other than the Vice President of USA Joe Biden with an exhortation that people step up and put an end to sexual assault.

Co-written with Diane Warren it saw the survivors get a star-studded send off as they filed out of the Dolby Theatre through the audience with Kate Winslet and Brie Larson hugging every one of them.

Possibly the one great thing the Academy did in this controversy-riddled edition was to award the Best Picture Oscar to ‘Spotlight’, giving a salute to investigative journalism, one of the most difficult branches of journalism.

It involves not just passion but immense guts to not only see your work published, but also make sure the perpetrators of the crime get the punishment they deserve.

Everyone has been so busy hailing Inarittu for winning Best Director back-to-back they forgot about a guy who has been on a winning spree for the past three years. The Mexican filmmaker Emmanuel "Chivo" Lubezki has won the Academy Award for cinematography for the third year in a row. His work on "The Revenant," is his third win after The Birdman in 2015 and Gravity in 2014. His use of long shots and reliance only on natural light in the Canadian wilderness lasting just 90 minutes every day saw the film garner 13 nominations.

It’s not for nothing that they call ‘The Revenant’s’ Mexican director Alejandro G. Inarittu the ‘King of Pain’. The ex radio and TV commercial maker won the Best Director Oscar in consecutive years (last year for The Birdman) and is the only one to do so in the last 65 years. Reportedly, his passion for perfection drives his cast and crew round the bend (but I heard he does make up by paying them well for all their efforts).

The loudest gasp from the audience did not come when Chris the Rock was verbally cutting up the Academy right, left and centre. It came when it was announced that UK’s finest stage artiste, Mark Rylance won the Best Supporting award for his performance as the bespectacled Russian operative Rudolf Abel in Steven Spielberg’s Bridge of Spies.

It was after all a foregone conclusion that Sylvester Stallone’s Rocky Balboa in Creed would win it. (By the way his protégé in the film, played by Michael B. Jordan did not even receive a nomination. How dark is that?)

Set in 1960 and inspired by true events, the film proves beyond doubt that democracy is the only governance which can guarantee a man’s rights. He may have been a Soviet spy, but under the US Constitution, Rudolf Abel was entitled to and given a lawyer (a role played to the hilt by Tom Hanks) to defend himself.

In his thank you speech, the remarkable Rylance proved his mettle by also applauding those who were overlooked nomination like the great British talent ldris Elba for Beasts of No Nation and Paul Dano for Love and Mercy.

One other notable film which recalled the cold war was ‘Trumbo’ in which ‘Breaking Bad’ actor 59-year Bryan Cranston channels real life, Hollywood screenwriter Dalton Trumbo. Nominated in the Best Actor category, the chain-smoking prolific writer of classics like Roman Holiday and Spartacus, (who incidentally wrote in his bathtub) could not take credit for both the films as back in the late 40’s he was blacklisted by the industry for his pro-communist beliefs.

One of the memorable lines in the film sees Trumbo inform his adversary: ‘We all have the right to be wrong’.

And if you don’t agree with the wisdom of that statement, just try talking to me.

The Oscar for Best Foreign Language Film went to the heart wrenching Hungarian drama Son of Saul set in the infamous Auschwitz Nazi camp during World War II. In it, a Jewish inmate discovers his little son’s body among the piles of gas chamber victims and tries to give it a proper burial by trying to locate a Rabbi in the camp.

The Australian film Mad Max Fury Road won six awards, the most number by any film (all of them were for technical categories). The moment the team won for Sound Editing, they were all so nosily celebrating backstage that they did not hear the next announcement saying that one of their colleagues had won for Sound Mixing. One can well imagine the racket that followed the realisation.

They said Kate Winslet could have competed with a wet seal dressed in a shiny, sleeveless black Ralph Lauren dress while pretty Julianne Moore chose a black custom Chanel Haute Couture creation as her choice.

She may have numerous issues going on due to her ongoing divorce with husband of ten years, Ben Affleck, but that did not prevent ‘Alias’ star Jennifer Garner dolling it up in a black, off shoulder dress from Versace and Neil Lane jewels.

One of the most memorable creations was worn by Carol’s star Cate Blanchett. Her soft, pastel blue Giorgio Armani dress had light feathery touches to it and she matched it with Tiffany & Co’s platinum earrings set with marquise and round diamonds.

Her co-star from the film, Rooney Mara is one star who never disappoints onscreen or off looked edgy and glam in a Givenchy Haute Couture dress and Fred Leighton jewels.

The award for best looking couple on the red carpet (if there had been one) easily goes to the boyishly charming Matt Damon dressed in a Versace suit and his wife Luciana Barroso in Atelier Versace matched by Van Cleef & Arpels jewels.

Bulgari ambassador Naomi Watts too opted for blue but with a mix of red in it teaming it with a stunning Bulgari High Jewellery Diva necklace.

Brie Larson on the other hand was a vision in an ink blue ruffled gown by Gucci, clinched by a velvet black, crystal and pearl belt.

Lady Gaga looked gorgeous in a luxurious white sleeveless Brandon Maxwell gown and pant ensemble teamed with Lorraine Schwartz jewellery that was perfect for the song she rendered so soulfully on stage.

Dressed in a nude and black Dior Couture dress, Jennifer Lawrence thankfully did not trip for once, either on the red carpet, the stairs or on the steps to the stage. Prayers do work they say. But neither did she win.

The lovely Emily Blunt can do nothing wrong. At complete ease and smiling blissfully, she came dressed in a peachy pink delicate strapped number by Prada with a Judith Leiber clutch.

For whatever reason, the ‘Scandal’ star Kerry Washington opted for a warrior look in a black and white Versace number adding sparkle with Harry Winston jewels.

There was perhaps one orange gown in the red carpet line-up and that was the slim and beautiful Olivia Munn who arrived in a Stella McCartney dress and Forever Mark jewellery.

‘The Danish Girl’ actor Eddie Redmayne and his wife Hannah Bagshawe opted for Alexander McQueen while his co-star, Best Supporting actress nominee Alicia Vikander was pretty in a soft yellow sleeveless Spring ’16 Louis Vuitton gown with silver embellishments and rouched at the hemline.  She is after all the face of the brand.

A great line-up of films as well as fashion and luxury brands on the red carpet made for great viewing.

But as the President of the Academy of Motion Picture Arts and Sciences (AMPAS), Cheryl Boone Isaacs put it in her well thought out speech, “Inclusion can only make us stronger’.

She is the first African American to hold this office.

True. In nature, diversity has a greater purpose. It helps us see the bigger picture…