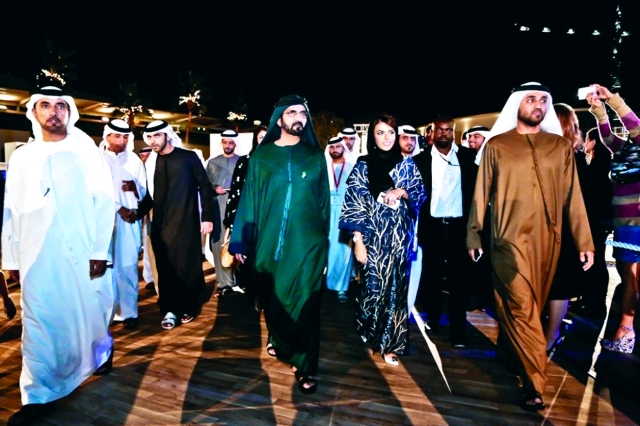 Dubai: His Highness Shaikh Mohammed bin Rashid Al Maktoum, Vice-President and Prime Minister of the UAE and Ruler of Dubai, visited the exhibition of shortlisted works for the 9th edition of the Shaikha Manal Young Artist Award, at City Walk.

Shaikh Mohammed viewed the artworks on display, and praised the high calibre works. He expressed his appreciation for the role of the Shaikha Manal Young Artist Award in enriching the arts and cultural scene of the UAE.

During his tour, he stopped to speak to some of the featured artists about the content and ideas expressed in their works. The exhibition, which features 50 artworks by young Emirati and UAE resident artists, was inaugurated by Shaikh Mansoor bin Mohammed bin Rashid Al Maktoum, Chairman of Dubai International Marine Club.

Shaikh Mansoor noted the wide variety of mediums and styles represented in the show. He added that the high-standard of works was a testament to the efforts of Shaikha Manal bint Mohammed bin Rashid Al Maktoum, President of the Dubai Women Establishment and wife of Shaikh Mansour bin Zayed Al Nahyan, Deputy Prime Minister and Minister of Presidential
Affairs, to raise the importance of art and culture in the community.

On the occasion, Shaikha Manal said: “I have always held a deep regard for the role of the Arts within the framework of any society and in the understanding that Art is a universal language and a powerful tool for intercultural communication.”

The open-air exhibition, which is curated by Patricia Millns, Artist and Advisor, is strategically located within the heart of the city’s urban arts scene at City Walk.

The show will be open to the public until January 24 from 10am to 10pm. The winning artists will be announced during the Gala Award Ceremony to be held in late January.