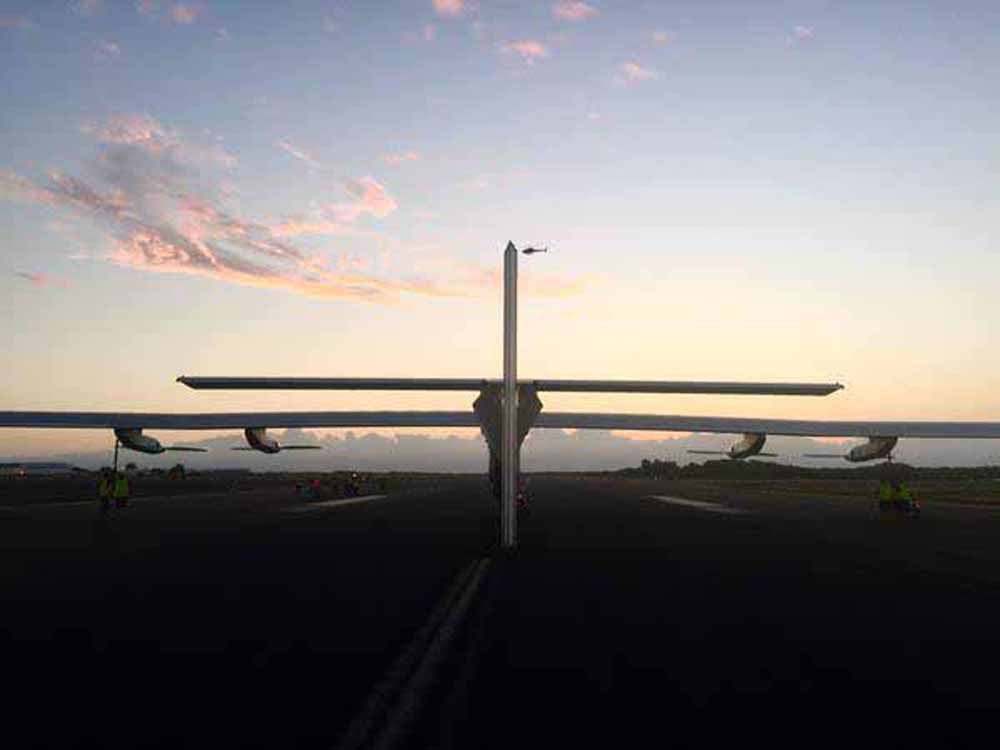 Solar Impulse 2, the revolutionary solar-powered aircraft able to fly day and night without a drop of fuel, arrived in Honolulu, Hawaii on Friday at 19:57 UAE time after crossing the Pacific Ocean. The 118 hour 8,261km flight from Nagoya, Japan to Honolulu made history, as it was a feat that had never been accomplished in the world of aviation.

For Solar Impulse and their technological and institutional partners, including official host partner Masdar, the completion of the arduous flight across the largest body of water in the world is a testament to the initiative's 12 years of work from inception, to feasibility studies, to the aircraft’s final design and construction, and pre-flight preparation in Abu Dhabi.

"Today we celebrate the most defying milestone of the Solar Impulse’s historic journey to circumnavigate the globe using only the power of the sun,” said HE Dr Sultan Al Jaber, UAE minister of state and chairman of Masdar. “After battling against unpredictable and challenging weather conditions – and a gruelling five days of non-stop flight – the plane successfully crossed the Pacific Ocean.

“This flight is an incredible feat of human fortitude, endurance and technological ingenuity,” said Al Jaber. “We commend the entire Solar Impulse team and its pilots, Bertrand Piccard and Andre´Borschberg, for their perseverance to demonstrate the viability of clean technology and to further the collective goal of securing a sustainable future.”

On June 28th, Si2 took off at 22:03 UAE time from Nagoya, with André Borschberg at the controls, for the solar team’s third attempt to make the historic non-stop Pacific Ocean flight powered solely by the sun.  With the safety of the pilot and aircraft always in mind, the Monaco-based Mission Control Centre chose to divert course and land in Nagoya, Japan shortly after Borschberg’s earlier departure from Nanjing, China due to deteriorating weather conditions which would have jeopardised the mission’s success.

In the hours after landing in Nagoya, gusts of wind damaged Si2’s 72 metre delicate wings. While repairs were undertaken, the Solar Impulse team capitalised on the stop in Nagoya to inspire students, promote innovation for a cleaner future and prepare pilot Andre´ Borschberg for the long flight across the Pacific.

Throughout the flight, Borschberg, alone in the single-seater 3.8m3 unpressurised cockpit, was exposed to extreme physical conditions. The mission presented operational and technical challenges for the pilot, aircraft, and the initiative’s 140 person support team. While the challenges of the experimental adventure have been diligently researched, developed and simulated, Borschberg, the technical visionary behind the attempt, faced the greatest challenges, alertness, endurance and perseverance.

The Pacific crossing was the eighth and most arduous leg of the 13 legs journey.  Borschberg and the aircraft, fitted with four electric motors and 17,248 solar cells spanning the 72 metre wings, climbed to an altitude of 8,500 metres during the day to harness the energy of the sun, recharge the plane’s lithium-ion batteries, and store energy for night flying.

Throughout the flight, Borschberg was in constant contact via satellite with Solar Impulse’s Mission Control Centre’s 20 specialists who anticipated every possible flight scenario and transmitted information to Borschberg enabling him to follow the optimal route for a successful mission.

After stopping in Hawaii, Bertrand Piccard will fly Si2 eastward towards Phoenix, to reach continental United States. The journey will continue with a yet to be determined stop in Midwest America and a landing in New York City, at JFK International Airport. After crossing the Atlantic, the solar powered plane will stop in either Southern Europe or North Africa, before completing its historic journey in its host city, Abu Dhabi.

The aircraft departed from Abu Dhabi on March 9 for Muscat, Oman and departed the following day for a trek across the Arabian Sea. It arrived in Ahmedabad, India on March 10. Following a brief stop in Varanasi, India, Solar Impulse took off for Mandalay, Myanmar on March 19 with Bertrand Piccard in the cockpit. The plane then completed its fifth and most challenging journey to date, arriving in Chonqing, China on March 30.

The aircraft’s departure from Chongqing to Nanjing China was delayed due to unfavourable weather conditions. The Solar Impulse team used the extended stay in Chongqing to inspire thousands of local students and community members, demonstrating how innovation and clean technology harbour the potential to create a more sustainable future.

Bertrand Piccard landed Si2 in Nanjing, China on April 21 and underwent technical preparations for the ambitious Pacific crossing. After departing from Nanjing on May 31 in an attempt to cross the Pacific, Borschberg diverted course and landed in Nagoya, Japan due to deteriorating weather conditions.