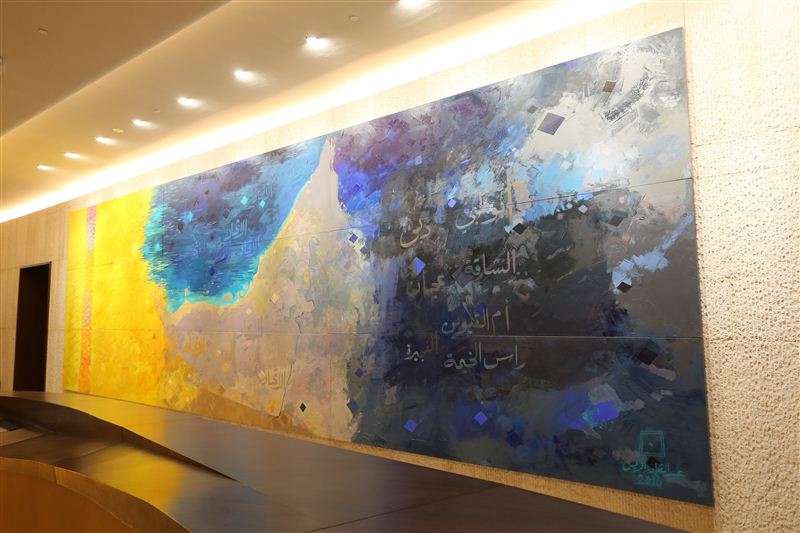 Since the Etihad Museum opened its doors to the public on the 7th January this year, visitors have been enthralled by the immense, eye-catching masterpiece displayed in the museum’s entrance hall. The artwork was commissoned by Dubai Culture & Arts Authority, the Emirate’s dedicated entity for culture, arts and heritage, and was created by one of the UAE’s most celebrated artists – Abdul Qader Al Rais.

Greeting visitors before they begin their journey through the exhibition halls, the painting features a stylised map of the UAE depicted in vivid yellow, blue and brown tones, recalling the nation’s sweeping sand dunes, clear blue seas and rugged mountains. These striking natural features have provided the nation with its sustenance since time immemorial, including its rich desert heritage and the flourishing pearling and fishing industries that formed the foundation for its future prosperity.

With his inimitable style and flair, Al Rais combines powerful colours, symbolic imagery and expressive brushstrokes to translate his love for the nation’s landscapes, nature and heritage into striking masterpieces. The left of the canvas is dedicated to the desert, depicting a palm tree trunk that symbolises sustenance, endurance, and the powerful life-force that allows plants, animals and even humans to survive and thrive in the desert.

Another distinctive element of Al Rais’ style is calligraphy, which runs throughout the masterpiece in a rich seam that captures the foundation of Emirati civilisation and culture – the Arabic language. On the left of the canvas appear the names of the Founding Fathers who signed the 1971 Union Agreement and brought the nation into being, while the right side features the names of the seven Emirates that were unified to make up the UAE as we know it today. At the very centre of the masterpiece is the word ‘Unity’, highlighting the pivotal role this founding principle has played in the life of the nation from its very inception to the present day.

Al Rais is one of the UAE’s most significant artists and has risen to international acclaim for his ability to create captivating representations of the nation’s beauty and heritage. His masterpiece serves as a poignant introduction to the Etihad Museum, which stands as a monument to Emirati heritage and inspires visitors with the story of the most significant moment in UAE’s timeline – the birth of the country.

Dubai Art Season – the citywide initiative which runs from March to April 2017 under the patronage of Her Highness Sheikha Latifa bint Mohammed bin Rashid Al Maktoum, Vice Chairman of Dubai Culture & Arts Authority – will see the Etihad Museum host a number of initiatives under its umbrella.  These include design talks that form part of the Design Days Dubai programme, and the Art Bus, which will stop at the Etihad Museum for the first time this year and invite visitors to enjoy Al Rais’ work up close. Dubai Art Season is a definitive initiative that aims to highlight the city's global credentials on the arts scene, bringing together artists from around the world for an unmatched celebration of talent, creativity, innovation and cultural diversity.