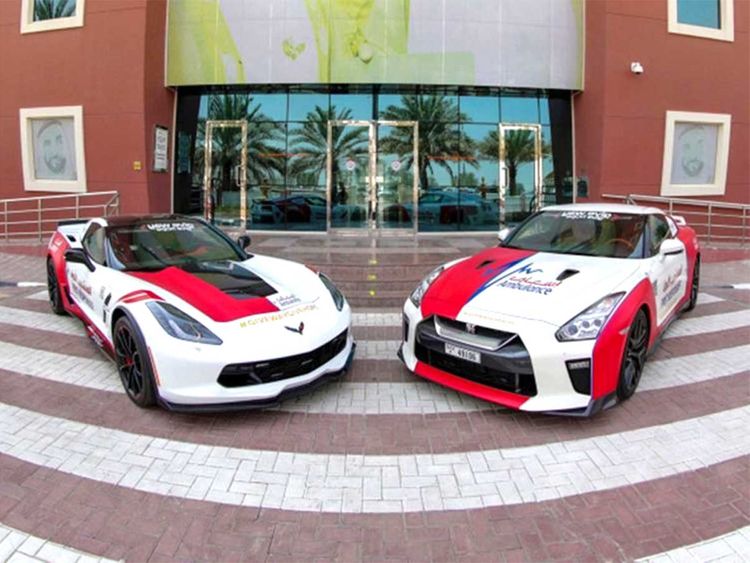 Three new supercars have been added to Dubai Ambulance’s fleet, bringing the total number of race cars to eight.

Khalifa Bin Drai, executive director of the Dubai Corporation for Ambulance Services (DCAS) said the supercars include a Nissan GT, a Corvette and a Range Rover.

The unveiling of the fast cars was made during the launch of a three-month campaign made in collaboration with DCAS, Dubai Police and the Roads and Transport Authority (RTA) titled 'Give way … Give Hope'.

The supercars will be deployed at various tourist hotspots across the city of Dubai, according to Bin Drai, and can be spotted in places like Dubai Mall, City Walk, Sheikh Mohammed Bin Rashid Boulevard and The Walk at Jumeirah Beach Residence (JBR).

The high-speed cars will also be used in sporting events, such as marathons, cycling and horse races.

Each car will be equipped with two paramedics and a driver, which will also be installed with cardiopulmonary resuscitation (CPR) equipment and oxygen cylinders, in addition to tools used to treat traffic-related accidents and drownings.

Bin Drai pointed out that the sports cars’ high speed means that the emergency response time will be between four and eight minutes, with the aim of providing first-aid quickly to victims before the ambulance arrives at the scene.