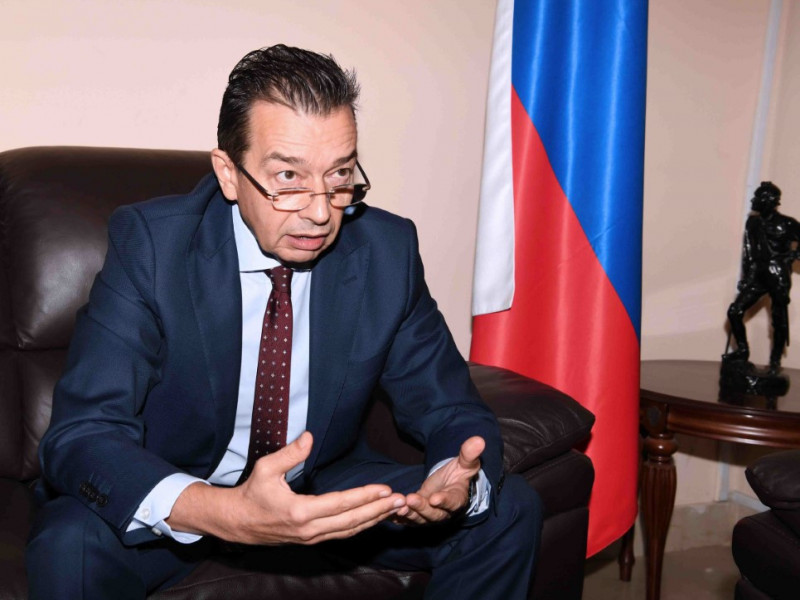 (WAM) -- A large Russian-speaking community in the UAE and the value of tolerance have brought Russia and the UAE further closer, said a Russian diplomat, emphasising that "The UAE is one of the most important partners of Russia in the Middle East."

"The UAE is hosting a Russian-speaking community of around 100,000 people, of whom about 40,000 are Russian nationals and 60,000 are citizens of former Soviet states. They foster people-to-people relations between the two great countries," said Yuri Vidakas, Deputy Head of the Mission at the Russian Embassy in Abu Dhabi.

As Russian President Vladimir Putin will be paying a state visit to the UAE next week, the Russian diplomat spoke to a group of selected journalists at the Russian Embassy in Abu Dhabi about the common elements and values between the two countries, citing tolerance as a significant one.

"The UAE is home to people of around 200 nationalities and likewise, Russia is hosting about 180 nationalities. The harmonious life of people of these many nationalities in both countries is an ideal example for [practising] tolerance in multicultural societies," Vidakas explained.

"The only Russian Orthodox Church in the Gulf region is in Sharjah. Russia has many mosques; authorities in the Russian region of Chechnya recently inaugurated one of the largest mosques in Europe," he pointed out as testimonies to religious harmony and tolerance in both countries.

Increasing tourism between the two countries also enhance people-to-people relations, he said, adding that about 900,000 Russian tourists visited the UAE in 2018.

There are about 111 flights a week between Russia and the UAE. "Many flights bring tourists from various regions of Russia to the UAE, especially to Sharjah, Ras Al Khaimah and Fujairah, apart from Dubai and Abu Dhabi. This trend is an example of a growing relationship between various Russian regions and the UAE’s emirates," the diplomat explained.

The relations have grown beyond federal governments. Sharjah was given ‘Guest City’ status by organisers at the 32nd Moscow International Book Fair, held in September. Likewise, various Russian regions are a regular presence in many events in the UAE, he said.

In the educational sector, at least five Russian universities are planning to open their branches in the UAE. "It may take time as they have to complete several formalities such as certification [and related matters] as per the local regulations. We have world-class universities and educational institutions, especially in medical education," Vidakas said.

On the political front, high-level visits in recent years underscore the importance both countries attach to each other.

The 'Declaration of Strategic Partnership' signed by both parties in June 2018 was a significant step that would act as a basic framework for future developments in relations, the diplomat said.

He pointed out that Russia was one of the first countries to recognise the UAE when it was founded in December 1971.

Talking about bilateral trade, which amounted to US$3.4 billion in 2018, based on UAE Ministry of Economy's data, he commented, "It will definitely improve in the coming years," adding, "we appreciate the fact that the UAE is a safe and secure country in the region."

He said innovation is a priority for both countries. "We can share the fruits of our innovations and can be partners in progress."

Russia is also joining the UAE’s celebrations on sending the first astronaut to the space. "We know why he [Hazza Al Mansoori] is a national hero. In our country also we regard astronauts as heroes," he concluded.