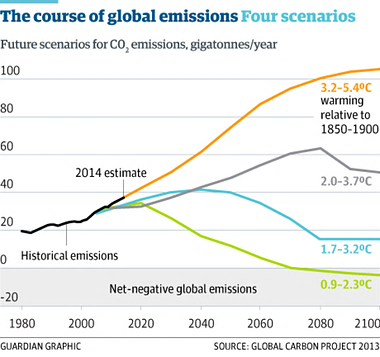 The UAE has participated in a preparatory ministerial-level meeting of the 21st session of the Conference of the Parties to the United Nations Framework Convention on Climate Change, COP21, to be held from 30th November to 30th December, 2015, in Paris.

Dr. Sultan bin Ahmed Sultan Al Jaber, Minister of State and Special Envoy for Energy and Climate Change, who represented the UAE at the pre-COP21 meeting, told participants that all parties to the convention recognise the climate change challenges.

The UAE ratified the Framework Convention on Climate Change, UNFCCC, in December 1995 and was the first country to ratify the second Kyoto Protocol phase in 2012.

The aim of COP21 is to reach, for the first time, a universal, legally binding agreement that will enable us to combat climate change effectively and boost the transition towards resilient, low-carbon societies and economies.

Al Jaber stressed the need to distinguish between the future commitments of advanced and developing countries to reducing CO2 emissions, which should strike a balance between the responsibility of industrialised countries for large rates of emissions, on the one hand, and the need for allowing developing countries, which have not contributed to the current challenges, to complete developing their infrastructure for various sectors, on the other.

Al Jaber called for intensifying efforts in the lead up to the COP21 conference in December to support the conclusion of an agreement that would enable all countries to take clear measures to curb the consequences of climate change while taking into account the different priorities of each country.

"The directives of the UAE leadership focus on co-operation with the international community and substantial efforts to reduce the consequences of climate change," he said, stressing that the UAE considers climate change as a challenge that can be countered through focussing on positive opportunities made available by innovative solutions.

He noted that the UAE and its regional partners, member states of the GCC in particular, are coordinating efforts to include their economic diversification strategies in a new pact, as these strategies ensure energy security through a diversified energy mix that includes hydrocarbons, peaceful nuclear power and renewable energy.

Al Jaber also urged participants to adopt the UAE's positive vision focussed on finding practical and innovative solutions through renewable energy projects that create new jobs as well as through drafting legislation that ensures a desired balance between the demands of development in developing countries and the international community's contribution towards reducing CO2 emissions.

The minister noted that during the past two days of the COP21 ministerial-level meetings, participants edged closer to consensus on clarifying the differences on how to define a developing country and an advanced country. He said he believes the meetings will help reach a better understanding of the varied and common responsibilities of all countries, where the participation of all involved parties should take into account the circumstances of each involved country.

He further noted that for the UAE and its regional partners, any new convention should be in line with the foundations of COP21 and provide support and opportunities for the desired continuous sustainable development and economic progress through diversifying sources of income.

On the fringe of the Paris ministerial-level meeting, French Foreign Minister, Laurent Fabius, the next chair of COP21, held bilateral meetings with participating ministers and officials to discuss ways of bolstering bilateral cooperation with their respective countries.