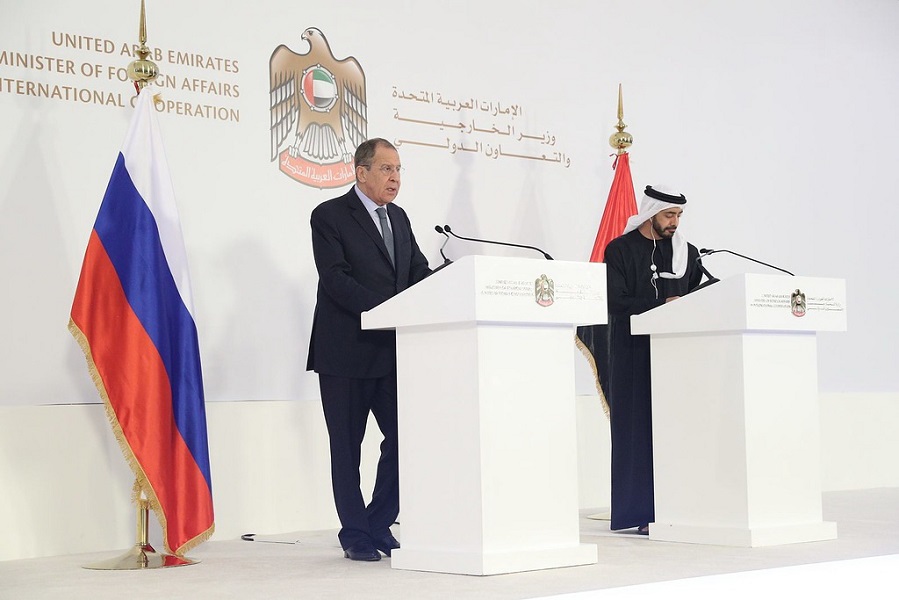 This came at a meeting held at the ministry's premises in the UAE capital, which occasioned a review of the latest regional and international developments of common interest.

H.H. Sheikh Abdullah underlined the close and historical relations between the two countries and the UAE's determination to continue to foster cooperation at all fronts.

The Russian top diplomat affirmed the UAE is a key strategic partner of his country, noting the distinguished bilateral relations and the continuing efforts being made to advance cooperation in various domains.

The re-opening of the UAE embassy in Damascus will help to ensure that Syria recovers its place in the Arab world, Sheikh Abdullah bin Zayed, the Minister of Foreign Affairs and International Co-operation said on Wednesday.

“We decided to re-open our embassy in Damascus to ensure that Syria returns to the Arab region,” he said during a joint press conference with Russian counterpart Sergey Lavrov in Abu Dhabi.

The UAE closed its embassy in Damascus in the early phase of the Syrian conflict. After six years, in December 2018, they announced the reopening in a move that has been seen as a sign of thawing relations between the Syrian government and the rest of the Arab world after years of diplomatic isolation. Two months earlier Mr Al Assad told a Kuwaiti newspaper that Syria had reached a "major understanding" with Arab states.

“The re-opening of the embassy is just the start of this journey,” Shiekh Abdullah told reporters. “We are still in the beginning stages”.

“It is vital to analyse the situation in Syria, how the situation developed and the decisions taken that impacted the crisis,” he said.

With the near-defeat of ISIS in eastern Syria and the recapturing of a large portion of the country by President Bashar Al Assad's forces, Syria is seemingly close to beginning a new chapter.

This, said Sheikh Abdullah, will require Arab involvement to protect Syria’s sovereignty and territorial integrity. “We want to see a Syria that is part of the region.”

The vast majority of diplomatic missions in Damascus closed and evacuated their ambassadors in 2012, as the once-peaceful demonstrations spiralled into violent clashes, and war.

Along with Afghanistan, Armenia and Bahrain – among others – the UAE is one of few embassies open in Damascus, in a bid to strengthen and activate the role of Arab states in supporting the independence, sovereignty and territorial integrity of Syria and to prevent the dangers of regional interference in Syrian affairs, Sheikh Abdullah said.

The UAE has increasingly pushed to promote diplomacy as a tool to increase peace and stability in the Middle East. Similarly, Mr Lavrov was keen to emphasise Russia's use of soft power within the troubled region.

Russia, said Mr Lavrov, is keen to continue the “uncompromising" fight against terrorism, drug and illegal arms trafficking as well as all forms of organised crime. “We are working to solve all crises in the region through diplomatic and political means,” he said.

Russia and the UAE have similar approaches to resolving conflicts in the region, said the Russian diplomat. Adding that the restoration and strengthening of regional security was impossible without putting an end to conflicts through political and diplomatic means and international law.

Russian-UAE relations, said Sheikh Abdullah, will continue to flourish. “Both the number of Russian tourists in the UAE and mutual trade has increased," he said. "We look forward to further cultural cooperation between Russia and the UAE.”

The Russian diplomat, who has been on a four-state tour of the Gulf, said that Moscow and Abu Dhabi are working together to counter extremism and terrorism in the region, thorough military cooperation.

Russia, added Mr Lavrov, wants to normalise relations in the Gulf region and “guarantee stability and participation of all countries”. More than a year since the start of the diplomatic rift between the quartet and Qatar, their is yet to be a solution in sight.

As part of his tour of the Gulf Mr Lavrov on Tuesday met with Saudi Arabia’s King Salman.

Both Saudi Arabia and Russia are pushing for the formation of a constitutional committee in Syria and have called for a political solution to end the war. “Russia is in communication with the US to ease any further escalation in Syria,” he said.

During his visit to Riyadh Mr Lavrov also met with Naser Al Hariri, chief of the High Negotiations Committee, and said Moscow appreciates Mr Al Hariri's intentions to seek compromise in the talks and expressed hope that the constitutional committee would soon be formed. Mr Al Hariri promised Mr Lavrov that his group will continue to coordinate with Russia on the negotiations. As one of President Al Assad's strongest allies, Moscow has hosted peace talks for Syria, rivalling the UN-sponsored negotiations.