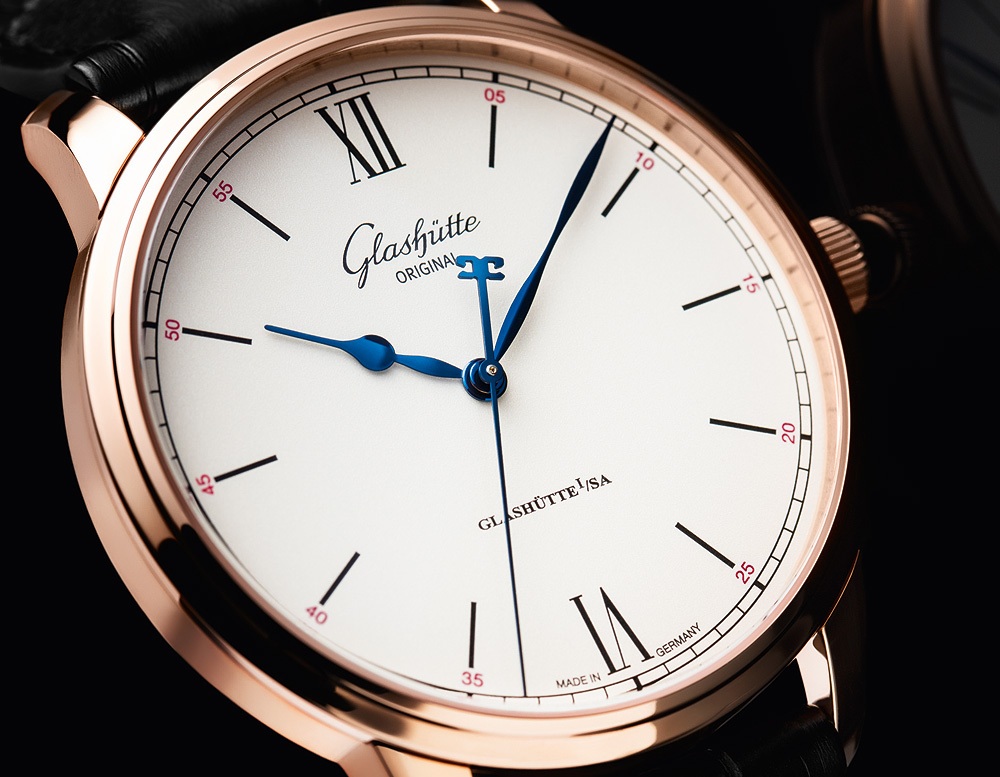 ‘Don’t crack under pressure’ TAG Heuer’s tag line advises (but unfortunately one of its brand ambassadors did). It’s bright and white Aquaracer 300M now comes in a bolder 43mm size with the feminine version featuring a fully ceramic case. Water resistant to 300m, it is powered by a Swiss quartz movement and boasts a ceramic bracelet. It also comes in an all black version with diamonds around the bezel and a black version with rose gold bezel.

Zenith’s new 36mm Elite Lady Moon Phase comes in five variations fashioned in 18K pink gold or stainless steel. The ultra-thin pebble-shaped case, water-resistant to 50m, is fitted with a fluted crown for smooth moon-phase adjustments. Through its case-back can be admired its mechanism powered by an oscillating weight adorned with a “Côtes de Genève” motif. It has a mother-of-pearl dial, diamond-set or polished bezel, a star-studded deep blue moon disc and slender leaf-shaped hands, stylised engraved hour- markers, or else slim Roman numerals on one of the versions.

Saxony brand Glashütte Original launched a new, in-house automatic movement Caliber 36 which makes its debut in its 40mm rose gold or stainless steel Senator Excellence. It is also the first movement for the brand offering up to 100 hours power reserve offers extreme stability in a construction that is highly shock resistant and is the first movement fitted with a silicon balance spring, an extremely high tech material.

Jaquet Droz 43mm Grande Seconde Dual Time Ivory Enamel features two off-centre dials – one with Roman numerals and the other with Arabic ones overlapping to form the infinity symbol. The upper displays the local time while the lower seconds dial doubles up with a 24-hour second time zone giving the reference time and the date is indicated by the red-tipped hand. It is powered by the Jaquet Droz 2663H24 self-winding mechanical movement and features an ivory Grande Feu enameled dial with a rose gold case and an opaline or onyx dial with a stainless steel case.

Carl F.Bucherer’s stainless steel or 18k pink gold Manero Flyback features the sophisticated mechanism incorporating a column wheel. The function is a means of timing a second interval while the chronograph hand is still running, by simply pressing the mushroom-shaped reset pusher and features hour-markers and sword hands in the same metal as the case.

Whether trekking through the mountains of Hatta, taking a leap of faith while skydiving over the Palm Island or a rally at the Dubai Autodrome, Mido the luxury Swiss watchmaker has the perfect timepiece for men who love to explore the great outdoors. Its Multifort Chronograph Adventure is a piece that is full of character and is made for those who enjoy straying off the beaten track.

IWC Scaffhausen pays homage to the Swiss boat builder Boesch with its 43.5mm stainless steel Portugieser Yacht Club Chronograph. It features a mahogany-coloured dial and the inside of the glass back cover there is a mahogany inlay and stylized ship’s propeller made by Boesch. Boasts 60m water resistance, it is powered by the in-house manufactured calibre 89361 mechanical movement with a flyback function and offering 68 hours power reserve.

Richard Mille’s new sporty RM 11-03 Automatic Flyback Chronograph in red or white gold and titanium is inspired by automotive history. It features the new automatic RMAC3 calibre imbued with a unique 3-D quality and boasting a power reserve of 55 hours. It also has an annual calendar with an oversize date as well as the 12-hour counter and countdown function of the flyback chronograph.

Rolex presents the 40mm stainless steel Cosmograph Daytona Ref 116500 LN with a glossy black ceramic bezel which is scratch and fade resistant and has engraved markings coated with platinum. It houses the automatic in-house calibre 4130 and is matched by the signature Oyster bracelet.

Inspired by the classic original model by the same name released in 1959, Omega presents its new Speedmaster CK2998 Limited Edition. It retains its classic Alpha hands and symmetrical stainless steel case with three sub-dials and tachmeter base scale in deep blue coated with Super-LumiNova. It also houses the same iconic movement Calibre 1861 used in the very first Moonwatch.

Perrelet’s 42mm stainless steel First Class Double Rotor Skeleton A1091/6 features the signature technology of the brand represented by the first Double Rotor movement developed in 1995 in tribute of its founder Abraham-Louis Perrelet. It features a new cobalt blue shade dial, a finely grained finish in the centre and is powered by the Manufacture Perrelet automatic P-181-H movement offering a 42-hour power reserve.

Launched in 2005, CVSTOS is a new bold concept in watchmaking. It’s superb Chrono Eiffel 24h pays tribute to Gustave Eiffel, the French engineer who created Paris’ most famous monument, Eiffel Tower which in turn was inspired by the famous Cross of Saint Andrew, a symbol of rigidity, transparency and lightness. It is powered by the new CVSTOS calibre CVS-3081/GMT-24H with a power reserve of 48 hours.

In an incredible show, Harry Winston's 50mm white gold Histoire de Tourbillon 7 features two biaxial tourbillons defined by a red aluminium or anthracite strip. The right side of the dial features a pyramid-cut reading area that houses the hour and minute hands. It is surrounded by indexable inserts that form a tilted three-dimensional hour circle overlooking a power reserve indicator in roll form that is flush with a domed sapphire crystal.

You can zoom into the universe just by gazing at the Louis Moinet’s 47.4mm grey gold Sideralis Limited Edition. Protected by two patent applications it features two tourbillions rotating in opposite directions and providing motive power for its Sideralis complication. A time dial, situated at 12 o’clock, comprises two discs: a top one featuring a hand-painted universe rotating counter-clockwise while at its 12 o’clock is a circular opening, where can be seen, three planets rotating clockwise, containing dust from meteorites whose origin is mars, moon and mercury!

Breguet's flamboyant Orangerie Joaillerie is playful allusion to the Orangerie of the Château de Versailles, a garden of delights. Fashioned in 18k yellow gold, its snow-set dial is lavished over with pave diamonds. Diamonds also sparkle on the bracelet along with spessartine garnets, rubies, spinels, yellow sapphires, pink tourmalines and yellow beryls. It houses a self-winding movement, balance spring in silicon and sapphire caseback.

"A ball gown must be the one of your dreams, and must also make you a dream-like creature. In my opinion, a ball gown is just as important a piece in a woman's wardrobe than a suit. And so wonderful for morale..." said Christian Dior.

The brand’s 38mm pink gold and black ceramic Dior VIII Grand Bal Cancan Ceramique Noir is a vision in Prussian Blue and crimson red limited to 88 pieces. The collection highlights the very superstitious founder’s lucky number and the date of the creation of his couture house, on the 8th of October 1946, the name of his first collection baptised “En Huit” (In Eight) or even the VIIIth arrondissement of Paris, on Avenue Montaigne.

Inspired by the connection between light and time, the much loved ladies timepiece from Bulgari LVCEA, introduces a radiant new twist with its special edition LVCEA Green Dial created exclusively for the Middle East. The strikingly attractive timepiece features diamond-studded indexes, an 18k rose gold bezel and steel and 18k rose gold bracelet strap and also a cabochon-cut pink stone accented by a round diamond on its crown.

Swiss luxury brand Charriol presents its flagship women’s timepiece for Baselworld 2016. An extension to its popular ST-TROPEZ™ collection, the 35mm GlamMoon boasts a bezel set with diamonds, pink sapphires and purple amethysts a white mother-of-pearl dial featuring a Moon phase display and diamond indexes and its signature cable strap with branded clasps and a new chain bracelet twinkling with 55 diamonds.

Ulysse Nardin's 39mm rose gold Jade with diamonds on its bezel is designed for women who love to paint their nails but hate to ruin the manicure while pulling out the crown of their watch. The pusher at 4 o’clock selects the crown function with winding at position 1, date adjustment at position 2 and time-setting at position 3. Jade was the first women’s watch from the brand with an in-house self-winding movement, the calibre UN-310 with a power reserve of about 48 hours.