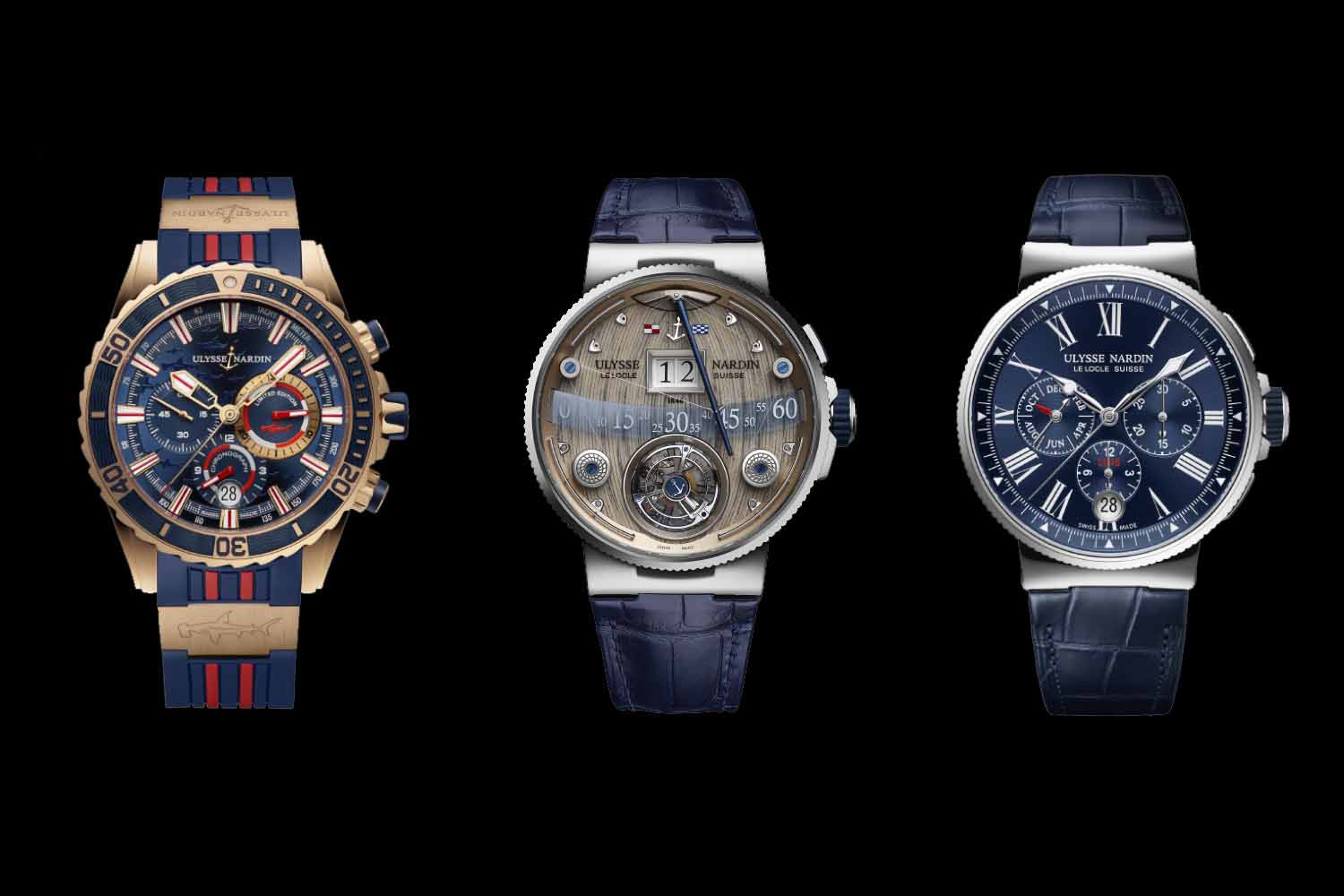 Bulgari unfurled its new chiming watch marvel, the Octo Minute Repeater Finissimo, the thinnest on the market at Baselworld. Setting a new standard in highly complicated extra-thin creations it is powered by the in-house developed and produced BVL Calibre 362 which is just 3.12mm thick. The sand-blasted titanium case overall is just 6.85mm thick with cut-out hour markers and small seconds dial and it comes in just 50 pieces. Gracing the occasion were actors Luke Evans, Bulgari’s exclusive Brand Ambassador for Watches, and friend of the brand Olga Kurylenko.

In this section we have some breathtaking models such as Bulgari's stunning Lvcea Il Giardino Paradiso. Graced with finely and elaborately decorated dials it evokes luxuriant fauna and flora with an exotic and vibrantly colourful bird of paradise motif and beats to the rhythm of Manufacture Tourbillon Calibre BVL 263.

DeWitt celebrates women, with its Classic Jewellery, Japanese Spring watch paying tribute to Japanese artistic crafts and to the majesty of Napoleon, a direct ancestor of its founder, Jérôme de Witt. The exceptional dials were produced in partnership with a famous Japanese artist, whose unique technique involves combining powdered diamond, platinum, gold, pearl, agate or other gemstones with Indian ink and fixing it painstakingly by hand, requiring around 30,000 to 50,000 dots per dial.

Replicating the architectural details of the façade of its 5th Avenue, Flagship boutique on its case and dial, is Harry Winston's Premier Pearly Lace Automatic 36mm. It features intricate lacework designs over a wafer-thin disc of iridescent mother of pearl, just 0.20mm thick superimposed on another layer of celestial blue mother-of-pearl! For added sparkle, 57 brilliant-cut diamonds on the bezel and lugs frame the artistic dial, while an inverted diamond is set on the crown. It is fitted with the HW2008 automatic movement equipped with a flat silicon balance spring.

Revered as a symbol of luck and fortune, by the Chinese, the goldfish appears in SARCAR’s luxuriant new watch, Goldfish. It took more than four years of research and development involving many master artisans, designers and craftsmen. The Blue Gold dial blends gold with a special material for a ‘pond-like’ illusion and features a hand-crafted rose and yellow gold twelve petal-leaf at the centre denoting an hour of the 12-hour cycle, while a diamond-set goldfish ‘swims’ and hides under the emerald-set leaves!

Having for many years represented the cutting edge of innovation at Blancpain, its Leman collection is a tribute to the largest lake in Western Europe by the same name and has hosted remarkable horological complications as well as innovative materials. Its new 40mm titanium Léman Reveil GMT features complications useful when travelling, such as an alarm, a dual time-zone display or the semainier 53-week display and is equipped with the self-winding caliber 1241 and offers 40 hours power reserve.

Breitling's black and yellow, 50 mm Avenger Hurricane boasts a world-first: its case is made of a futuristic material named Breitlight® which is 3.3 times lighter than titanium and 5.8 times lighter than steel, but harder, with exceptional resistance to scratches, traction and corrosion, anti-magnetic, thermal stability, anti-allergic properties. Its Manufacture Breitling movement is equipped with a 24-hour military-type display and aviation-inspired stencil-type numerals. It is powered by the new Manufacture Breitling Caliber B12, a selfwinding chronograph with a 24-hour display as is customary in the military and among pilots, and chronometer-certified by the COSC (Swiss Official Chronometer Testing Institute) and is matched by an exclusive black Military textile fiber strap combining yellow rubber core.

Longines’ watchmaking expertise quickly gained popularity amongst international railway companies and at the beginning of the 20th century, its watches were worn by the employees of many railway companies in Romania, Serbia, Persia, Italy, Chile, Canada, the United States, Turkey and China. Its new Railroad watch is based on "railroad grade" watches made for the rail service in the 1960s. The new 40mm Railroad has an elegant stainless-steel case featuring a 24-hour format and housing the Longines caliber L888.2, with dauphine hands and a seconds hand with a gently curved tip.

Chanel’s first ever men’s watch Monsieur de Chanel debuted at Baselworld 2016. It is also the only watch in its portfolio to feature an in-house mechanically winding movement - the Calibre 1. Boasting a 40mm white gold or beige gold case, it took five years to develop and is a jumping watch with the hour indicator at the 6’oclock index. On its silver opaline dial, the hours are displayed in Arabic numerals within an octagonal window inspired by Place Vendome in Paris and the bottle stopper of Chanel’s iconic No. 5 perfume. Above it is the running seconds counter and above that is a retrograde minutes function in a 240 degree display and it has a three-day power reserve.

Created in collaboration with UK's independent watch retailer The Watch Gallery, stainless steel 45 mm Zenith’s new Pilot Type 20 Extra Special Blue comes in just 35 pieces. It has an AR-coated sapphire crystal and is water resistant to 100m and frames a beautiful blue dial set with silver Arabic numerals with Super-Luminova treatment. The case-back is engraved with the Zenith Flying Instruments logo to remind the role played by Zenith in the conquest of the skies. The in-house 679 automatic movement beats at 28,800 vph with a power reserve of 50 hours.

Glashutte Original's charming Lady Serenade comes in three new versions and is powered by the automatic manufactory Calibre 39-22. We feature the refined bi-colour edition presented by the brand for the first time. The midsection of the case in classic stainless steel is complemented by a bezel and crown in rose gold, a fine white mother-of-pearl dial with filigreed gilt applique indexes applied by hand, a date disc in the window at 6 o'clock, curved Roman numeral hour indexes at 3, 6, 9 and 12 o’clock and a distinctive crown set with an elegant onyx cabochon or diamond brilliant.

Omega's Seamaster Aqua Terra comes in either 38.5mm or 34mm in 18K red gold, 18K yellow gold, 18K Sedna™ gold and stainless steel. The dials, set with diamond indexes, are made from white pearled mother-of-pearl as also Tahiti, lavender and coral introduced for the first time. Diamonds appear on the bezels of some models too and it delivers superb precision and performance through the OMEGA Master Co-Axial Calibres 8500/8501 and 8520/8521, both resistant to magnetic fields of 15,000 gauss.

Carl F. Bucherer’s Alacria Diva Gothic flaunts a curved profiles, set with 211 rubies in various cuts and 169 diamonds FC, embodies a hint of love, power and Gothic architecture. Ancient Greeks as well as other races regarded the ruby as the flower among precious stones. The black contours in the dial, made of lacquer, recall the arched structures of Gothic church architecture and complemented by its bracelet made of noble black ray skin with red alligator leather on the underside.

This iconic, jewellery-watch from Versus Versace changes look and becomes Sunnyridge Mesh. Even more precious with a new metal mesh bracelet that is thin and essential, as well as flexible and compact. It presents a retro aesthetic, in deep contrast with the key feature of the case design: the Lion Head set in the main pattern on the dial and in a 3D version on the lug. It is available in IP yellow or rose gold, with a display in a broad range of colours.

Breguet’s Perles Impériales Haute Joaillerie watch pays homage to the Empress Josephine, first wife of Napoleon Bonaparte. In 1800, she notably acquired a small tact watch, no. 611, recognisable by its blue enamel case and the diamonds adorning its caseband. The new model is inspired by it and features brilliant-cut diamonds around the rim of the bezel further enhanced by a large, lustrous Akoya pearl at 6 o’clock and four diamond markers – at 3, 6, 9 and 12 o’clock. It houses a mechanical movement endowed with the brand’s latest innovations and features a sapphire crystal caseback.

Chopard pays homage to the first watch created for the L.U.C collection: the original L.U.C 1860 launched in 1996 as the first timepiece produced by the Chopard Manufacture with 1860 referring to the date when Louis-Ulysse Chopard created the Brand. The two 40 mm watches share the 4 Hz (28,800 vph) Calibre 96.01-L, the first in-house movement created by Chopard Manufacture 20 years ago. Automatically wound by a 22k gold micro-rotor, it is endowed with two barrels to ensure a 65-hour power reserve, The elegant gold dial, with small seconds sub-dial at 6 o’clock, features a central part with a hand-guilloché motif radiating out from the logo at 12 o’clock, has a total thickness of just 7.2 mm and is chronometer-certified by the COSC.

Girard-Perregaux celebrates its 225th anniversary with a vintage re-edition - the new 41mm stainless steel, Laureato Ref. 81000. First launched in 1975, it is a throwback to the golden age of sports watches, the 70’s. It has a typical tonneau shape with an integrated bracelet and the specific round bezel with 8 angles and a round glass and a transparent caseback, revealing the calibre 3300, an in-house, automatic movement boasting 46 hours of power reserve. The dial has a “clou de Paris” pattern and is available in blue or silver with 3 hands filled with luminous paint and a date window at 3.

TAG Heuer brings back one of its lesser-known racing models: the Monza with the new Heuer Monza Chronograph. Originally released in 1976, it was a gift to Heuer’s then-partner, Ferrari F1, to celebrate its win of the 1975 F1 World Championship originally used PVD coating on the watch’s steel case to make its design stand out, but the new version uses a grade 5 titanium case coated in titanium carbide to get its cutting-edge looks. It is now 42mm and the crown has moved from the left to the right. In its heart beats the new Monza is TAG’s Calibre 17 automatic chronograph movement which the brand uses broadly across its range of chronographs.

To celebrate the 40th anniversary of Piaget's in-house quartz caliber 7P – the company's first in-house quartz movement – it has released a hybrid quartz/mechanical caliber in its white gold 46.5 mm Emperador Coussin XL 700P. The new caliber 700P with 42-hour power reserve uses a conventional mechanical going train, powered by a micro rotor at 9-10 o'clock position that winds the mainspring. It enshrines the mechanical/quartz caliber 700P and has a black ADLC coated bezel, generator and micro-rotor surrounded with white gold.

First produced in 1946, the new Rolex Oyster Perpetual Datejust 41 is one of its iconic models. Its ladies model is the highest selling Rolex models ever. It features the same aesthetic design with a sunburst dial and a glistening fluted bezel, standard date at 3o’clock and houses the new Rolex caliber 3235which is automatic, has a power reserve of 70 hours and features 14 patented parts. We present the COSC certified Everose Rolesor gold and stainless steel model set with diamond indexes and an Oyster bracelet (champagne or black dial).