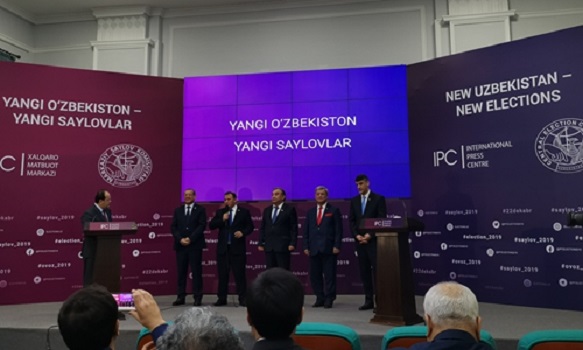 After Shavkat Mirziyoyev became the Uzbek president in 2016, the country has paid a series of efforts to reform and focusing on economic development, and this election was also a chance for the government to show its achievements and prove itself to the outside world that the country is stable, peaceful, developing and the whole society has strong desire to open and reform.

These are the first parliamentary elections held since Shavkat Mirziyoyev secured a win in the December 2016 presidential election, claiming 88.6% of the vote.

The country has great ambition to embrace economic globalization and realize economic development through opening-up. This kind of massive strategy needs to be approved by the people, and that's why it invites so many foreign observers and media to report this election. A total of 825 observers, representatives of nine international organizations and 41 foreign countries, including ­China, Russia, the US and many EU member states were invited to observe the election process in all regions of the country. The Senate will be formed following the elections for the legislative chamber. The last parliamentary elections were held in 2014.

The elections are being held under the slogan "New Uzbekistan, new elections" as authorities seek to brand them as the latest example of a newfound openness.

The political parties nominated 750 candidates. A breakdown of the profile of the candidates shows that almost a third of them (about 30%) are teachers, followed by 19% with economics education, besides 12% doctors, 9% engineers, and 7% lawyers and some candidates from entrepreneurs or independent business people.

Also, contesting political parties have been allowed to participate in television debates in another first.

Under the newly enforced election code, the number of women should be at least 30% of the total number of candidates nominated by a political party.

Polling stations in Central Asia's most populous country opened at 8:00 am (0300 GMT) and closed 12 hours later. Uzbekistan used for the first time a Unified Electronic Voter List, with more than 20.5 million voters being registered, according to the Uzbek Central Election Commission (UCEC).

Around 10,260 polling stations were set up for the elections, 55 of which were located abroad at the diplomatic missions of Uzbekistan, including in Dubai. According to the UCEC, 13,355,911 voters, 71.1 percent of the total legal voters across the country, participated the voting until 8:00 pm on Sunday.

Early in the day, an election observers' mission from the Shanghai Cooperation Organization (SCO) and the Commonwealth of the Independent States (CIS), a regional organization comprising former Soviet republics, called the voting free, transparent and democratic. Experts said that Uzbekistan is showing its determination and confidence on its own opening-up and reform through a high-profile and transparent election, and the Central Election Commission (CEC) called it a success and great achievement for the country.

Five officially registered political parties, the Liberal Democratic Party of Uzbekistan, the National Revival Party, the People's Democratic Party, the Social Democratic Party Adolat and the Ecological Party competed for 150 seats in the Legislative Chamber of the Oliy Majlis of the Republic of Uzbekistan, the lower house of the parliament.
In Sunday's vote, 128 deputies of the 150-seat lower house of the Uzbek parliament were elected and the second round of the elections will be held in two weeks, the Central Election Commission (CEC) said Monday.

The Liberal Democratic Party of Uzbekistan is mainly formed by entrepreneurs and business persons, and the victory showed that economic development is the biggest consensus of the country, local analysts noted.