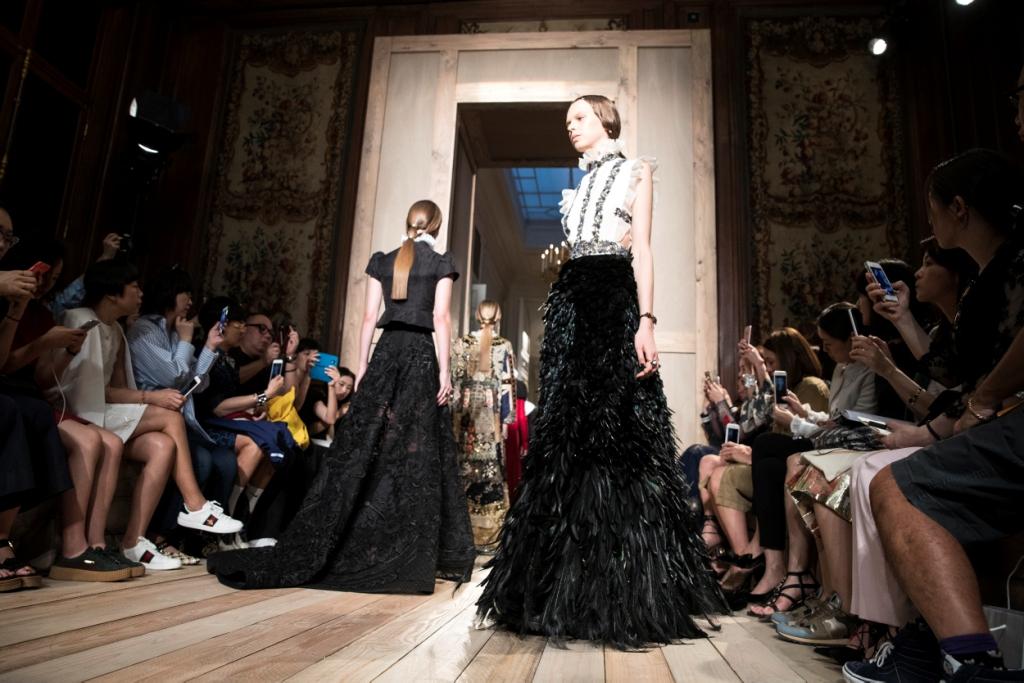 The austere and moderate tone, the choice of dense colors, precious and nocturnal, upon which an opulent and deep black prevails, the intentional subtraction of the gleaming and theatrical aspects of Couture, confer to the creations presence and power and a masculine grace that is a repercussion of the Shakespearian world that has an intimately and highly masculine spirit. The figurative verve appears on white cotton shirts and on tulle or cotton ruffles that recur as a sign and accent, conferring solemnity to the succession of the dresses. The austere silhouette is drawn by slim trousers worn with petite masculine jackets, by the elongated and liquid dresses, by the boule shapes that release an archetypal grace, by the solemn and transcendent cloaks that underline the regal stride. Lushness is a submerged play of weaving that must be grasped on a closer look: on dark and sumptuous brocades, on taffetas scattered by tiny tie designs that bring together once again masculine and feminine, on the organza’s which are encrusted with poetic embroideries. Contrasts on the booties with thick soles, that are characterized by touches of Elizabethan punk and jewelry assembled on leather strings, created by Alessandro Gaggio.

Transforming the secret inner being in apparel, Maria Grazia Chiuri and Pierpaolo Piccioli celebrate the representative power of fashion and the exciting and emotional alchemy of the work of the Atelier.