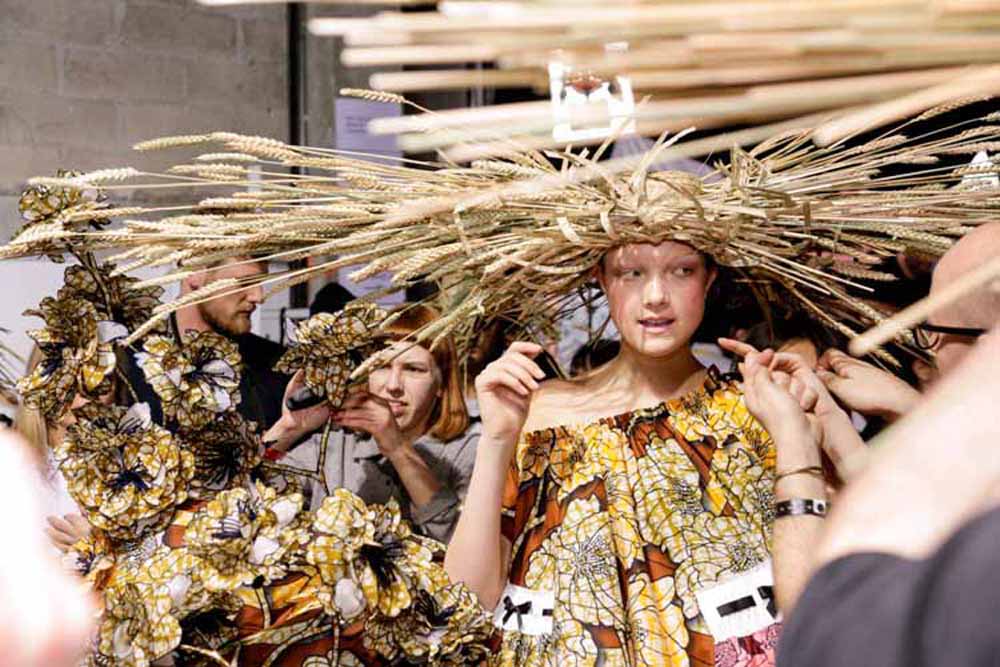 At V & R’s show the beauty of Van Gogh’s famous paintings featuring wheat fields, his sunflowers and his astonishing use of colours came to the fore.

Headgear that was so elaborate and lavish, as to stop one in their tracks. Crafted from dried wheat stalks, they were utterly magical millinery creations designed to enhance the feminine mystique of their wearers. (Of course it wasn’t easy when models passed one another on the runway. But choreographically they had to move to the side to avoid their headgear getting entangled). According to fashion observers, the Victor & Rolf duo amplified the floral inspiration of the RTW collection presented in October 2014 clearly went all out to with their couture special unfurling a marvelous treat that fused the rustic beauty of Van Gogh’s paintings with kaleidoscopic attire from Louis XVI’s court. Adding to the tempo was the musical score which was perfectly adapted, offering a soothing lullaby tune spiked with a deep bass techno beat that made you feel you were both in the future and in the distant bucolic past simultaneously.

Sculptural batik A-line babydoll dresses with craquelé indigo lines (French for a network of fine cracks or crackles on the surface of a painting) and awesome 3D flowers blossoming and spilling all over were perfectly matched by those luxuriant straw hats. The grand decorativeness of those dresses was soberly accompanied by discreet floralprint flip-flops and a broad collar stitched with an intermittently appearing band that evoked the tailor’s stitch as well as the white road-markings that graced V&R’s fall/winter collection.

The show presented a flight to fantasyland where one can put down one’s cares and maybe flit around for a while or longer. But sooner or later one will have to get back terra firma. So how one would adapt this Van Gogh theme for the season and wear those very delectable creations is the challenge. But not to worry, do take your time.

For before that, here are some holiday plans you may want to consider. Van Gogh-wise that is.

Also known as the Garden of Europe, Keukenhof is located in Netherlands and is the world's second largest flower garden following Dubai Miracle Garden. Van Gogh was born in Zundert, Netherlands and is considered one of the most famous Dutch artists whose work had a far-reaching influence on 20th century art.

The highlight of its Van Gogh year is a flower bulb mosaic of Vincent Van Gogh covering an area of 250m² and made up of thousands of tulips. The flower shows display wonderful combinations of thousands of tulips and his paintings. In 2015 there is a new Selfie garden inspired by his self-portraits in a modern setting. Some 800,000 visitors from 100 countries are expected to visit this year.

The park is open to the public from 20 March up to 17 May 2015 showcasing no less than seven million spring-flowering bulbs, each one of them, lovingly and magically fashioned by the greatest artist mankind has ever known – Nature.