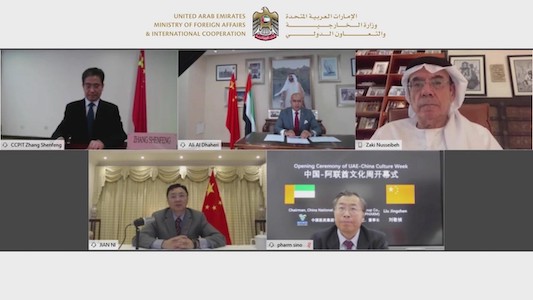 Delivering opening remarks at the launch event, Zaki Nusseibeh remarked, "We are blessed in the United Arab Emirates to live in a country that enjoys stability and prosperity and is characterized by its spirit of optimism and openness to the world. The extraordinary circumstances facing the world community today however, unleashed by the outbreak of a pandemic that poses existential challenges, can only be overcome through global cooperation and solidarity. This means that we need to build on cultural and public diplomacy to help in removing divisions between nations and peoples to promote a renewed and invigorated sense of global responsibility and empathy that empowers our international community to work together in addressing the major political, economic, and social challenges before us."

"To succeed in this endeavour, it is imperative that we work to build bridges of trust and understanding between us. Sustainable international cooperation, the prerequisite foundation for long-term partnerships, can only be achieved through the better understanding of each other’s culture and values," he added.

"Cultural exchange is one of the ways we can use to build trust and understanding between us. The cultural heritage of every nation, expressed in its arts, its films, its literature or music, underlines despite its rich variety and complex diversity our common roots in one humanity. In sharing, promoting, and understanding the works of our creative artists, we help to convey to one another our culture and values, overcoming the barriers of language.

"We are all proud of the solid and historic relationships of friendship and cooperation between the United Arab Emirates and the People’s Republic of China, a relationship that goes back to the Silk Road era, the trade route that connected China, Central Asia, Arabia, and the Mediterranean," he noted.

Moreover, Nusseibeh commented that this relationship took a new form after the establishment of the UAE as a state in 1971. Basing its foreign policy on the need to build bridges of understanding and cooperation with all nations that share its values, the UAE set as a priority objective the maintenance of strong relations with China in every domain, beginning with the formal establishment of diplomatic relations in November 1984 and visit by Chinese President Yang Shangkun to the UAE in December 1989.

Those ties were crowned by the late Sheikh Zayed bin Sultan Al Nahyan, the founding father of the UAE, on his historic visit to China in 1990. Cultural exchange was central to that visit, which resulted in the establishment of the Sheikh Zayed bin Sultan Al Nahyan Centre for Arabic Language and Islamic Studies at the Beijing Foreign Studies University.

"Our ties were further strengthened through frequent mutual visits by the leaders and officials of the two countries. In March 2008, His Highness Sheikh Mohammed bin Rashid Al Maktoum, Vice President, Prime Minister and Ruler of Dubai, visited China, and in 2015 a similar visit by His Highness Sheikh Mohamed bin Zayed Al Nahyan, Crown Prince of Abu Dhabi and Deputy Supreme Commander of the UAE Armed Forces, took place to consolidate and develop our strategic partnership," he stated.

In order to encourage and promote cultural exchange between China and the UAE, the first school of its kind in the region teaching the Chinese language officially opened in Abu Dhabi in 2010, and the University of Dubai has established the nonprofit Confucius Institute on its premises to promote the language and culture of China. Meanwhile, the UAE Ministry of Education is planning to integrate the Chinese language into its curricula and to establish specialised schools for that purpose.

A number of cultural events helped in enhancing a rich exchange programme between the two countries, including the UAE’s participation at the Expo Shanghai in 2010 and in the 2019 Asian Civilizations Exhibition held under the patronage of Chinese President Xi Jinping.

The Chinese Spring Festival was celebrated in Dubai in 2015, and in conjunction with the 'Year of Tolerance' and the celebration of the 'Chinese New Year' in 2019, several events were launched as part of the "Hala China" initiative, while the Dubai-based China-Arab Radio continues to explore both national and Chinese communal and cultural values.

"I am confident that the launching of today’s UAE-China marathon will be a further step in the consolidation of the relations of friendship, solidarity, and understanding between our peoples," he concluded. (Source from WAM)