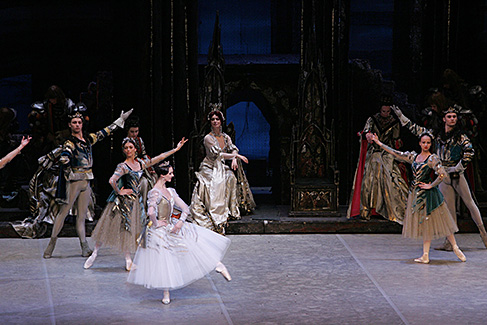 Dubai – 22 December 2014: The program of the unprecedented Galas with Etoiles and Soloists from Paris Opera National Ballet has been unveiled and will strike the public of the UAE by its uniqueness and excellence, worthy of the most renowned stages around the globe.

“Last year, the audience was struck by the high level of the performers and by the intensity of the modern pieces. The challenge of this second series of Gala is to fill the audience with more wonders, prestige and excitement” explains Reiko M Cheong, the organizer of the Gala and founder of the Dubai Dance Academy.

The Gala will open with the technically challenging Grand Pas Classique by Gvovski, interpreted by two growing young soloists, Hannah O’Neill and Jeremy Loup Quer. The Pas de Deux from the romantic La Sylphide in the Bournonville‘s version (1836) and from the cadenced and rare Esmaralda will be a demonstration of the virtuosity of the soloists.

The contrast will be intense with the modernity of the contemporary pieces. The original and passionate Caligula choreographed by the French Etoile dancer, Nicolas Le Riche, will also be presented, as well as the melodious Three Preludes by Ben Stevenson.

The Etoile dancers, Ludmila Pagliero and Karl Paquette, will close the first part with an exclusive interpretation of the Pas de Deux from Cinderella, in the exceptional version of Nureyev, who was Creative Director of the Paris Opera National Ballet from 1983 to 1988

And last, but certainly not least, we are honoured to introduce Wayne McGregor and the excerpt of one of his brilliant works Genus. This award-winning British choreographer is mainly renowned for his physically testing pieces and groundbreaking collaborations across a wide range of genres including dance, film, music, visual art, technology and science. Wayne McGregor has created works for major ballet companies in Paris, San Francisco, Stuttgart, New York City as well as other renowned ballet groups across the globe.

The second part will showcase excerpts from the vibrant Act II of La Bayadere, in the Nureyev’s version. The costumes borrowed from Paris Opera Ballet are splendid and were designed by the famous Italian costume designer, Franca Squarciapino. Squarciapino's costume designs are inspired by ancient Persian and Indian paintings, with elaborate head-dresses and hats, colourful shimmering fabrics, and traditional Indian garb. The brilliant costumes, the cadenced music of Minkus and the magnificence of the dancers will ensure extraordinary and unforgettable moments.

“This will be my first time performing in Dubai and I feel extremely excited about doing so. For me, it is very symbolic that I will be taking the part, among other choreographies, of Gamzatti in La Bayadere, as I became an Etoile at Paris Opera Ballet in March 2012 after my first ever performance in this role” says Ludmila Pagliero, one of a very small number of females to have the title of “Etoile” at the Paris Opera National Ballet.

For the second time, the Gala will give the opportunity to the public of the UAE to discover the most loved and innovative dance works, performed by the most distinctive French dancers!

The Gala is taking place thanks to the strong support of our dedicated partners. For the second consecutive year the main partners are Chalhoub Group (Major Partner), Air France (Airline Partner), Sofitel Dubai Jumeirah Beach (Hotel Partner) and L’Alliance Francaise (Strategic Partner). Abu Dhabi Classic FM is joining the second edition as Official Radio Partner. The décor will be designed and supplied by the UAE based company, Electra Events & Exhibitions.

Tickets are available at: