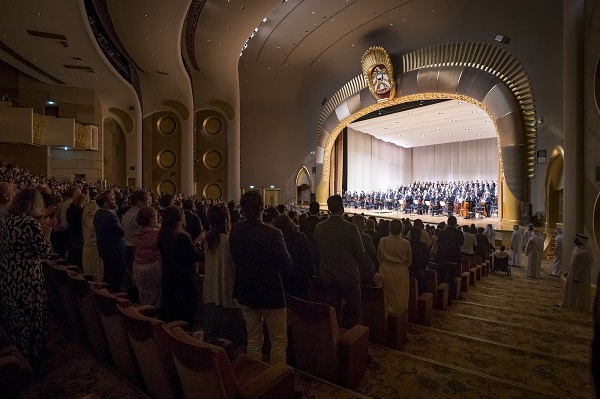 Abu Dhabi is being officially designated as a ‘City of Music’ by the UNESCO Creative Cities Network.

The designation was announced on 8 November by the United Nations Educational, Scientific and Cultural Organization’s Creative City Network, an initiative launched in 2004 to promote cooperation among cities which recognise creativity as a major factor in their sustainable urban development plans.

Abu Dhabi has long prioritised culture and creativity as essential drivers of social development and economic diversification, constantly fostering meaningful forms of expression and identity that embody and shape people-centered, sustainable development. Music is one of the culture and creative industries domains which has seen significant levels of investment and support. Abu Dhabi is at the crossroads of the Arab world, Asia, Africa, and Europe, and this legacy of openness and cultural exchange supports the vision to grow a music sector fostering inclusion and identity across communities and generations.

The ‘City of Music’ designation will reinforce Abu Dhabi’s position as the home of a resilient and growing music ecosystem that is built on innovation, collaboration, and shared governance. The emirate now sits alongside cities such as Liverpool in the UK, Auckland in New Zealand, Sevilla in Spain and Chennai in India as focal points for music creativity as drivers of sustainable development plans.

Abu Dhabi has a rich heritage in traditional music and performance, and a thriving contemporary music scene. Today, the emirate is home to some 200 nationalities, each with their own culture and diverse forms of musical expression. Abu Dhabi’s five-year culture strategy, managed by the Department of Culture and Tourism – Abu Dhabi (DCT Abu Dhabi), aims to draw more attention to this musical diversity, to utilise music in public spaces to enhance liveability and sense of place, as well as to find ways of leveraging music as a tool for connecting older and younger generations.

Her Excellency Noura bint Mohammed Al Kaabi, Minister of Culture and Youth, said: "Music forms an integral part of Emirati heritage. The Emirati musical tradition has flourished in different parts of the UAE, along with lyrical poetry. These musical traditions tell the story of Emirati pride, and the deep appreciation Emiratis have for their cultural identity and their land."

Her Excellency pointed out that music is one of the common factors in the cultural life of more than 200 nationalities living in the UAE. The Ministry of Culture and Youth is working to develop creative industries, supporting talent and launching initiatives aimed at consolidating the role of music as an effective tool in reviving a culture of dialogue, tolerance and openness to other cultures.

Her Excellency added: "We have three distinct creative cities in the UAE, which contribute to strengthening the country's position on the global cultural and creativity map. Abu Dhabi's winning of this title strengthens the success of our focus on developing the cultural and creative industries, and to make the UAE one of the leading regional centers of creativity. We are proud of Abu Dhabi joining the UNESCO Creative Cities Network.”

“From traditional sung poetry performances and ancient instruments to our modern music scene, Abu Dhabi has a unique musical legacy. We celebrate our past while remaining open to new sources and genres of musical expression, fusing the traditional and the contemporary to bridge cultures and generations. By highlighting and nurturing the incredible depth of music diversity and talent in the emirate today, we are ensuring that music remains a fundamental element in the cultural life of the Abu Dhabi community,” said HE Mohamed Khalifa Al Mubarak, Chairman of DCT Abu Dhabi. “Abu Dhabi is a culturally diverse, globally minded city, a place where policies and cultural initiatives ensure that creativity and culture drive sustainable urban development. We are thrilled to have our efforts recognised by the UNESCO Creative City Network, and hope that Abu Dhabi’s status as a ‘City of Music’ will serve to further contribute to a superior quality of life in the emirate.”

Torchbearers of the Abu Dhabi music scene include Bait Al Oud, a homegrown academy which plays an essential role in documenting and promoting Arab music heritage, and Abu Dhabi Classics, the annual concert series paying tribute to classical music. Alongside the important music programmes of the Cultural Foundation are those of Abu Dhabi’s many cultural organisations such as the longstanding Abu Dhabi Music and Arts Foundation (ADMAF), which among its many activities supports aspiring talents and musicians and hosts a renowned yearly music festival, a mainstay of the emirate’s cultural calendar.

Berklee Abu Dhabi, the Middle East’s preeminent institute of contemporary music and performing arts, and New York University Abu Dhabi’s Arts Center and Music Programme, have both been leveraging the accelerating popularity of local and regional music – the fastest growing segment of the global music industry – through the production and commissioning of new talent.

With the UNESCO Creative City Network designation, Abu Dhabi joins the nearly 250 cities around the globe which currently work together towards a common objective: placing creativity and the culture and creative industries at the heart of their development plans and it will continue cooperating actively with key players from the music industry across the world.

The designation as a UNESCO City of Music will allow Abu Dhabi to continue its cultural mission of expanding the music sector as part of the commitment to grow the culture and creative industries, which is a cultural and economic priority for Abu Dhabi. This includes contributing to job creation and economic diversification, supporting the development of the local music scene and recording industry, and increasing music contribution to the film, television, and gaming sectors.