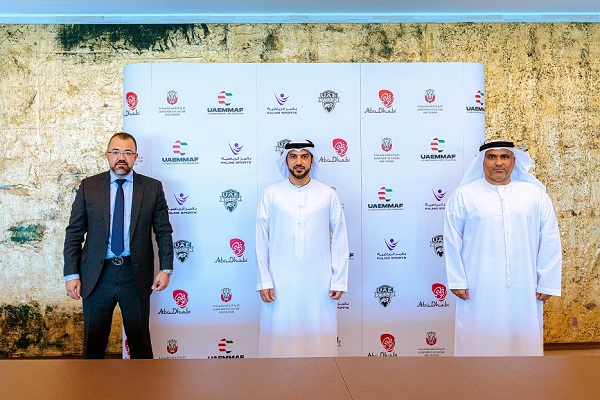 At a ceremony on Tuesday 24th August, DCT Abu Dhabi announced the signing of a Memorandum of Understanding (MoU) with the UAE Mixed Martial Arts Federation (UAEMMAF) and Palms Sports, the UAE-based sports management and training company.

The MoU outlines a formal collaboration between the three entities to develop MMA in the country as a step towards cementing Abu Dhabi’s reputation as the global capital for the sport.

At the signing ceremony, it was also announced that DCT Abu Dhabi had signed a five-year sponsorship agreement with UAE Warriors, the popular MMA fight events organised by Palms Sports.

“Today marks another milestone for DCT Abu Dhabi. Working closely with our partners at UAEMMAF and Palms Sports, we are excited to announce our collaboration to promote and develop the MMA ecosystem in the UAE,” said HE Al Shaiba. “This strategic agreement will play a key role in enabling the emirate’s development as an MMA world capital, as well as boosting Abu Dhabi’s position as the preferred destination for sports tourism.”

Al Dhahiri expressed his appreciation for the critical role DCT Abu Dhabi performs in promoting the emirate as a tourist destination of distinction. He said that Abu Dhabi had successfully asserted this status by hosting major international sports events, which were made possible by Abu Dhabi’s outstanding facilities, renowned hospitality and state-of-the-art infrastructure. Al Dhahiri added that the collaboration would further boost Abu Dhabi’s presence on the global MMA scene and fortify the emirate’s position as a major hub for the sport.

Darwish said: “Abu Dhabi has become synonymous with world-class cultural and sports events. This is particularly true after having hosted successful editions of UFC Fight Island in 2020 and 2021.

“UAE Warriors has gained considerable momentum following its relaunch in early 2019 under the management of Palms Sports, thanks to generous support from numerous government departments and sports officials. Our sheer presence in Abu Dhabi is enough reason to succeed and accumulate all these achievements and accolades in record time.”

DCT Abu Dhabi’s sponsorship of UAE Warriors will support the series to make it a leading event within the industry. The first editions of the event since the sponsorship deal was announced were ‘UAE Warriors 19: Arabia 3’ on 18 June and ‘UAE Warriors 20’ on 19 June, both of which received substantial interest from MMA athletes and fans across the world, as well as international media coverage.