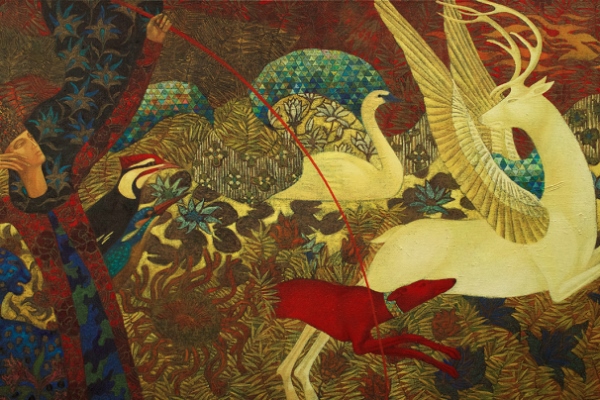 its gallery space. The opening for this latest exhibition will be held on March

One of the longest, most colourful and renowned, is the Silk Road. It runs

across ancient civilizations, new States and many cultures. It unites East and

West, from China to Ireland. 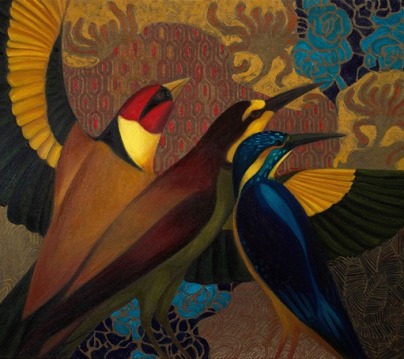 Timur was brought up in the middle of this stretch, in Tashkent, the capital

city of Uzbekistan, and his life was woven into the historical legend of the

Silk Road. His childhood was filled with the bright colours of the ancient

bazaars and the echoing sounds of eternal cities: Samarkand, Bukhara and

College in Tashkent – with a beautiful complex of old buildings, enclosed

courtyards, all shaded by tall trees and refreshed by fountains.

It created the feeling of a little oasis in the middle of the busy city. Painting

was a joy in those atmospheric art studios. Lunch breaks would be just

across the street, in a little café situated above the Anhor River. Traditional

food: plov, lagman and nan bread was accompanied by the music of a 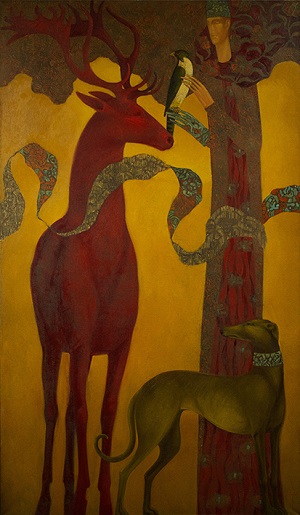 in Moscow in 1990. He was a regular visitor to the Pushkin Museum of Fine

Arts, where he drew works of antiquity. He also did extensive research on

human proportions in the museum library.

Five years later, he moved to London. His education continued at the Royal

Academy of Art Schools. There he received the Sir James Walker and Jack

He began exhibiting in several art galleries and actively participated in

London's art circles. In 1994, he won the Guinness Prize for ‘The Best First

Time Exhibitor’ at the Royal Academy Summer Show. In 2002, he

participated in the BP Portrait Award exhibition at the National Portrait

Moscow in 2014. He was asked to create a couple of large scale works for

the King of Bahrain. His work has also been collected by Yemeni Royalty

London, commissioned a painting to commemorate the 150th anniversary of

symbols sourced from, among other things, early Byzantine art

which his art is inextricably linked to the world of textiles; for example, he

excels at depicting the rich fabrics of Chinese silk printing, influenced by the

intricate patterns of the Nabis School.

His shapes and patterns take on a life of their own, lending a lyrical harmony

to the composition. Timur’s elongated figures and symbolic details form a

The insistent flatness of the image, moreover, renders the elongated figures

of his protagonists – the hunters, hounds and falcons - inseparable from their

environment; they seem not so much to inhabit the space as to merge with

Today, Timur D'Vatz spends time between his studios in Normandy and

London. Though he has moved from the Uzbekistan region, he still

expresses the soul of the Silk Road in his life and work. He is a part of the

journey: a timeless traveller who weaves his magic on an eternal Byzantine

Andakulova Gallery, Dubai, is a contemporary art gallery whose objective is

to promote Central Asia’s contemporary visual arts. It serves as a platform to

exhibit and support emerging to established contemporary artists from

Kazakhstan, Kyrgyzstan, Tajikistan, Turkmenistan and Uzbekistan (or the

‘Stans’) across a variety of media.

Founded by Natalya Andakulova, its higher purpose is to cultivate a

of the ‘Stans’ to the artistic hub of Dubai. The gallery strives to build