Shaikh Hamdan rode on the first tram along with senior government officials, with two more trains in tow, for the inaugural run.

Mattar Al Tayer, Chairman of the Board and Executive Director of RTA, briefed Shaikh Hamdan on the Dubai Tram project at a glittering ceremony held on Tuesday evening.

A key leg of Dubai’s integrated model of public transport, the tramway is connected with Dubai Metro at two stations in Dubai Marina – Damac station and Jumeirah Lakes Towers station.

The network is also linked to Palm Jumeirah’s Monorail at Palm Jumeirah station, which is also equipped with an extensive parking area, taxi lay-bys and a footbridge. 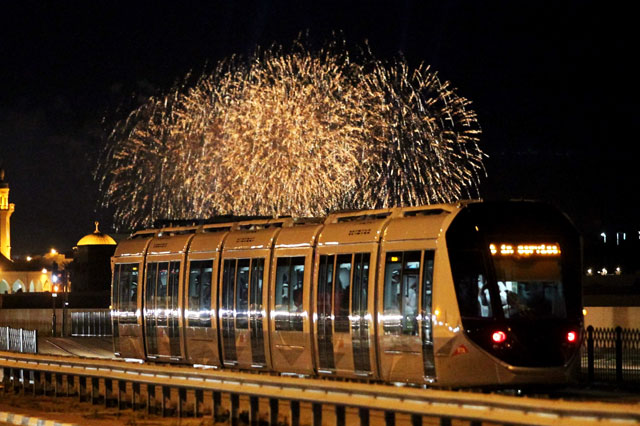 With one Gold cabin, four Silver cabins and two cabins for women and children, each tram has a capacity to carry 405 passengers.

Initially, the tramway is expected to serve around 27,000 people daily and, in the second stage, with an extension of four kilometres and six more stations, the ridership is expected to increase to 66,000 daily.

Work on stage two is expected to commence in 2016.

A Silver class trip on the tram will cost Dh3 irrespective of the distance travelled, while the Gold class fare will be Dh6. As with all modes of transport, payment of fares for Dubai Tram will be made only through the Unified Automated Fare Collection system, Nol,

RTA’s newly introduced Nol fare packages will also go live today, offering commuters up to 47 per cent discount across all modes of transport.